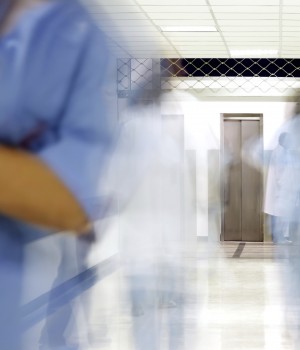 A RECENT STUDY in the Annals of Internal Medicine painted a not-very-pretty picture of working conditions for primary care physicians. Not surprisingly, a good number of those doctors responding to a survey reported time pressures and “chaotic environments.” Primary care stress “again no surprise “was linked to physician burnout and dissatisfaction.

But what about working conditions for hospitalists? While that study has yet to be done, it’s desperately needed, according to Adam Singer, MD, the founder and CEO of IPC The Hospitalist Company Inc. The North Hollywood, Calif.-based national physician group practice company is the country’s largest, with hospitalist practices in more than 500 facilities nationwide.

Outpatient doctors apparently report many problems with working conditions, which may help swell the ranks of hospitalists. What kind of work environment would primary care physicians find if they made the switch to hospital medicine?

There is a big difference between inpatient and outpatient medicine, and much of it comes down to control. If you own your own outpatient practice, you at least control the environment you work in, down to the color of the paint on the walls. In the inpatient setting, particularly at first blush, physicians have absolutely no control over factors like medical staff, nursing, physical plant or schedule. You don’t control anything related to your “office.”

What among those factors can create poor working conditions in hospital medicine?

Bad nursing is probably the No. 1 issue that leads to doctor dissatisfaction, and that manifests itself in many different ways: poor language skills, or a lack of protocols about when physicians should be called, or the amount of work nurses will do vs. what they’ll expect physicians to do.

That’s particularly the case in teaching facilities, and we have a tough time staffing private physicians in academic settings. Physicians report being treated like residents by the nursing staff and having to draw blood on their own patients and remove NG tubes.

That’s increasingly the case with work-hour limitations, which will become more stringent next year. Many teaching hospitals now are looking to private groups to come in and take care of the overflow of patients from their teaching services. But these facilities aren’t geared to having private physicians on staff.

How about in community hospitals? What problems do you run into there?

For instance, hospitals should be thinking about assigning case managers to hospitalist teams instead of by floor or patient population. But administrators are afraid that will be seen as favoritism, so they don’t make that change. That’s evolving some what in hospitals where we have hospitalist floors or unit-based rounding. But you don’t see dedicated case managers in a lot of places around the country because hospitals are slow to change.

It’s even tougher when hospitalist groups walk into facilities with very disruptive environments, where there’s a long history of the administration and the medical staff being at odds with each other. That type of culture and history makes it very hard to figure out how to partner with these hospitals.

Do you run into medical staff that still aren’t ready for hospitalists?

We don’t see that kind of backlash much anymore. But in many hospitals, hospitalists end up having to decide if they want to be on the administration’s side, the medical staff’s or in the middle.

That’s a very hard political position for younger doctors to navigate. A young doctor right out of training is thrown into this entrenched war between the Hatfields and the McCoys, and there are landmines everywhere. The doctors don’t know who they need to talk to about who to consult with, what are appropriate admissions from the ED, or how to interface with case management. That puts physicians under extra stress.

Then there are more subtle things, like the lack of provision of any space within the hospital for the hospitalist group. Some places don’t even provide a call room or a desk and computer.

Or there are internal problems with staffing and the call schedule, and that’s particularly a problem with seven-on/seven-off situations. If you get short-staffed at all, doctors end up seeing a huge volume of patients, just because half of their workforce is off.

What’s improved over the last 15 years?

The problems have existed all along, and more hospitals now are trying to figure out how to partner with hospitalist groups. But sometimes, instead of helping us establish better nursing relationships or assign case managers to hospitalist teams, hospitals decide that, “We are going to bludgeon this thing into control by employing our own. We’ll force them to order what we want them to do.”

They often don’t fully embrace the idea that we have this new specialty that we need to partner with. How hospitals are trying to build alignment with hospitalist groups right now is all over the map, and it can sometimes lead to very poor working conditions.

Any thoughts on factors that hospitalists might bring to the table that adversely affect working conditions?

One that comes to mind is something you see increasingly in rural facilities, particularly those with shift-based hospitalist programs: Those physicians don’t even live in the community. They have no roots there and seem and act as outsiders, and that creates a lot of problems.

What’s your approach if, say, you find a medical staff in revolt?

You run into a wall, and then you make headway. We’ve gone into several extremely hostile environments, and you do make headway, but there’s a lot of heavy lifting: a lot of meetings, and physician turnover because many doctors can’t manage that kind of change.

In these types of situations, how do you move the group ahead?

One key is to not fight about problems in the hall. We bring it back to the practice group and we discuss it, which is one advantage of working in a practice, not for the hospital or facility. We always retreat to our practice first, develop a plan and go forward, and I don’t think a lot of groups do that. They have a lead doctor out there fighting their battles for them, and that usually leads to dissatisfaction for everybody. If you give group members a role in decision-making and leadership, physicians tend to be happier.

Isn’t it better to have one person putting out fires, to delegate that role to one or two key people?

The problem with the classic structure of having a medical director or lead doctor doing all of the decision-making is that it minimizes the impact of having a team. You need players across the team, and we try to utilize every one of our physicians.

Can you at least make a case to a hospital that if they don’t deal with the power struggles, it becomes a lot harder to market your hospitalist group? That would be one thing to try, but I don’t think a lot of hospitals have figured out how to market their hospitalist programs yet. At IPC, we typically have more than one practice in a city, and we build infrastructure in each market for outreach. That benefits the hospital even when it’s not participating.

This is again one of those areas where classically, a hospital and a doctor didn’t go out hand-in-hand to do marketing. It’s an alien thing that they haven’t figured out yet, but they should. As far as improving work conditions, think about how you’d feel if your administration was out in the community promoting you.