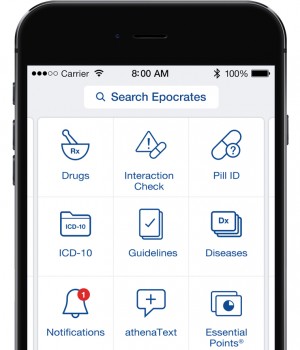 TAKE A LOOK AT THE MOBILE DEVICES Adam Glasofer, MD, carries with him, and you won’t find a treasure trove of apps. That’s because Dr. Glasofer, a pediatric hospitalist, doesn’t like to clutter his iPhone “the device he’s most likely to use at work “with apps that don’t get regular use.

So which ones have made the grade? Dr. Glasofer, assistant medical director for the Children’s Hospital of Philadelphia at Virtua Inpatient Pediatrics in southern New Jersey, says his iPhone currently has about 10 apps, but only a handful are used regularly.

“With about five apps, I can do anything I need to do,” he says.

Powerhouse apps
Two apps “Epocrates and UpTodate “account for most of his mobile screen time at work. Dr. Glasofer uses UpToDate several times per shift because it’s an easy way to answer so many different questions.

“You can go to one place for so much information,” he says. “It’s such a time-saver.”

Dr. Glasofer also uses a Citrix interface app that allows him to connect his iPhone to the information system at the two Virtua hospitals where he practices. That allows him to tap into the system from just about anywhere.

“I was on vacation in Florida and got a note that dictations needed to be signed,” he recalls. “I did it laying on the beach.”

Other apps
Then there are those apps that Dr. Glasofer uses less frequently: