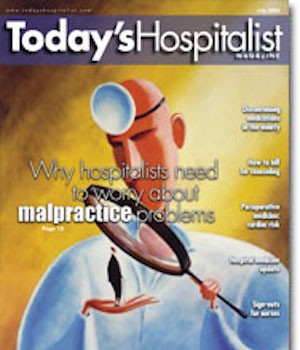 Published in the July 2006 issue of Today’s Hospitalist

Are you paying enough attention to the malpractice risks that confront you as a hospitalist?

Because hospital medicine has experienced such meteoric growth, its physicians and leaders are often so busy trying to stay afloat that they pay scant attention to malpractice risks. But according to Eric Siegal, MD, hospitalists need to be aware of the leÂ¬gal risks they face because they “like many of their hospital-based physician counterparts “are vulnerable to lawsuits.

“If you’re not thinking about risk management, you’re not paying attention,” said Dr. Siegal, an assistant professor of medicine at the University of Wisconsin, Madison. He directs and helped develop hospitalist programs at the university’s two hospital campuses.

Dr. Siegal, who was speaking at the Society of Hospital MediÂ¬cine meeting held earlier this year in Washington, said his experience serving as an expert witness in five hospitalist malpractice cases alerted him to the heightened risk that hospitalists face. That experience was such a “rude awakening to the world of medical liability” that he set about to identify those risks “and strategies hospitalists can use to reduce them.

He quickly realized, however, that his task would be made difficult by a scant body of data on hospitalist-specific malpractice lawsuits. “There is no Medicare identifying code for a hospitalist that distinguishes us from internists or FPs,” Dr. Siegal explained. “That makes it difficult to tease out who is getting sued and for what reason.”

Do hospitalists face a higher risk?

The lack of malpractice data that targets hospitalists also makes it difficult to answer what is a burning question for some in the specialty: Are hospitalists at greater risk for malpractice than non-hospital based internists?

In the “yes” camp are those who argue that hospitalists are at greater risk because they take care of patients with higher acuity and greater complexity “with no benefits of an established relationship,” Dr. Siegal said. Issues like the inherent discontinuity of hospital care and problems co-managing patients “situations when it’s not always clear who is in charge “also expose hospitalists to increased risk.

Then there is what Dr. Siegal calls the “innocent bystander” risk. “When the patient has a bad outcome,” he said, “the plaintiff’s attorney will sue anybody and everybody in the room.” Even if the hospitalist was simply “baby-sitting the patient for the neurosurgeon and had no substantive input,” Dr. Siegal explained, there’s a good chance the hospitalist will be named in the lawsuit.

Not everyone, however, agrees that hospitalists face a heightened malpractice risk. In the “no” camp, for example, some argue that hospitalists have more support than their office-based counterparts, from greater access to specialists, sophisticated information systems, ancillary personnel and patient-safety specialists.

Dr. Siegal said that in his view, debating who’s more at risk “hospitalists or office-based internists “is academic, particularly because there is so little hard data on the topic to guide the discussion. As a result, he finds it more instructive to focus on the key areas that predispose hospitalists to malpractice risk.

In his thinking, there are three major categories: miscommunication, practice-scope over-reach and work overload. The mitigating strategy for addressing all three, Dr. Siegal contended, “is to use a systems approach to improve care and build processes that reduce the risk of getting sued.”

Raising the bar for communication

Although the risks related to miscommunication “between providers or among providers and patients or patients’ families “have been widely discussed, hospitalists can expect to see more focus on these issues from the malpractice standpoint. Dr. Siegal said that case law starting in the 1990s and continuing into the new century has been slowly expanding what is expected of physicians when it comes to communication.

Physicians are now expected to provide clear instruction to patients and families about what they should do post-discharge. They’re also increasingly expected to make sure that follow-up and referral issues are handled proactively and documented not only in patient charts, but in physician- and patient-focused discharge summaries.

The fact that the Joint Commission on Accreditation of Healthcare Organizations (JCAHO) has also called for standardized, person-to-person patient hand-offs in its 2006 patient safety guidelines means that the failure to do so could increase malpractice exposure in the future, Dr. Siegal predicted.

To reduce the risk of communication mishaps and hand-off-associated malpractice suits, which the large medical liability carrier Norcal cites as a “key area for hospitalists,” Dr. Siegal urged attendees to do the following:

“¢ Avoid “proxy” patient hand-offs. Information should travel directly from one provider to the next, because sending it through an intermediary increases the risk that something will be miscommunicated.

The hand-off should be interactive, not a one-way “data dump,” Dr. Siegal explained. The receiving provider must have the opportunity to ask questions or challenge your assumptions. Written hand-offs are OK, he added, but should be considered “a first step and a first step only.”

“¢ Document with care. Anything in writing, including written signouts and e-mails, is potentially discoverable in a lawsuit. It may be important to inform the next physician about a patient’s difficult and manipulative daughter. Just don’t do it in writing.

“¢ Keep it simple. Don’t let verbosity obscure your main message about the patient’s condition or important follow-up matters. Keep hand-off details concise and organized, Dr. Siegal said, and “do it the same way every time. ED physicians figured this out a long time ago.” And if there are test results pending, clearly note that in writing and identify who is responsible for following up.

“¢ Don’t assume that physicians know how to communicate. Effective handoffs often need to be taught.

Eager hospitalists who want to help out the hospital’s specialists by offering to co-manage certain patients could be setting themselves up for increased malpractice risk, Dr. Siegal said.

That decision can be a particular problem when the hospitalists’ duties take them outside their personal comfort zone or professional practice scope. Harried hospitalists who decide not to hand off a patient when they should, thinking that it is more expedient to hang onto the patient than refer him out, are also on potentially dangerous turf.

He gave the following case as an example of how hospitalists can find themselves in hot water:

A 32-year-old woman who presents to the ER with leg pain, tells the ER physician that she had a leg clot three years ago. She explains that while she had been taking warfarin, she stopped the therapy. The patient is a heavy smoker with diabetes who is also morbidly obese.

The ER physician orders a venous ultrasound, prescribes low-molecular-weight heparin while waiting for results, and admits the patient to the hospitalist’s care. The ultrasound shows no evidence of DVT, and a follow-up venogram done the next day is also normal. The hospitalist makes a provisional diagnosis of musculoskeletal pain and sends the patient home on aspirin and analgesics.

Two days later, the patient visits her PCP for leg pain. After reviewing the hospitalist’s discharge sheet, her physician reassures her and sends her home.

Two days later, the woman returns to the ER with severe leg pain. The leg is cold and pulseless on examination. When an arteriogram reveals a deep occlusion, the woman is rushed to surgery. But after 12 hours in the OR, the surgeon cannot revascularize the leg and ultimately amputates above the knee.

Dr. Siegal noted that the case potentially exemplifies what he called “over-reach.” Three vascular surgeons later asked to comment on the initial presentation all raised concern that this was an arterial clot, he recalled.

But it also demonstrates a failure on the part of everyone concerned to obtain adequate information about the patient. As it turned out, she had been previously seen in a nearby hospital for what was not a DVT, but an arterial embolism due to heavy smoking and antiphospholipid anÂ¬tibody syndrome.

“No one worked very hard to get that chart from the previÂ¬ous hospital,” Dr. Siegal said. Making matters worse for the hospitalist, he added, communication about the discharged patient was relayed to the PCP’s nurse, not the doctor, because the physician wasn’t in the office.

In addition to a number of mishandled issues that emerged in the case, Dr. Siegal added, a key problem was that the hospitalist was in over his head. To help prevent the type of “mission creep” that could put hospitalists in a dicey spot medico-legally, he urged participants to take the following actions:

“¢ Define what hospitalists do “and don’t do “when it comes to patient management. “Remember that you are only as strong as your weakest link,” he said. “If one person in your group cannot manage ventilators, nobody should manage them until you find a way to either train or cover for that person.”

“¢ Be internally consistent when negotiating expectations with referring PCPs or specialists. If a hospitalist agrees to follow a neurologist’s patients, for example, the group has the right to say it will only do so if the neurologist agrees to come in if called.

“¢ Develop triage guidelines when working with certain subsets of potentially complex patients. At Meriter HospiÂ¬tal, a University of Wisconsin-affiliated hospital, for example, hospitalists and cardiologists have developed guidelines dictating how patients would be distributed according to diagnosis and acuity.

The third major area of malpractice risk “the over-worked hospitalist “may be obvious, but it warrants constant repeating, Dr. Siegal said, especially in light of the shortage of hospitalists. “We all have a breaking point,” he noted. “Remember that hospitalist productivity benchmarks are still crude and don’t apply in every situation.”

To reduce the risk that overwork will expose the hospitalist or group to a malpractice lawsuit, Dr. Siegal recommended the following strategies:

“¢ Define what constitutes a “manageable” hospitalist service. Clearly note both the ideal patient load and a ceiling.

“¢ Create a service “cap” as well as a pop-off valve (back-up providers to take over patients or admit new ones or cross-coverage arrangements) when volumes become unmanageable. It’s also important to ensure that any identified or contractually committed back-up providers are not only available by agreement but also by proximity and readiness to work.

Finally, Dr. Siegal urged participants to pay attention to what he described as “known malpractice lawsuit prevention” techniques, strategies that risk managers emphasize but all too often fall on deaf ears: Use a good bedside manner, avoid getting into turf wars and document fully and appropriately. “Those are still the basics,” he said, “and preventing lawsuits is really just good risk management.”