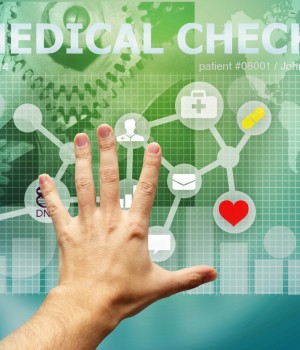 RELEASED THIS SPRING, “The Digital Doctor: Hope, Hype, and Harm at the Dawn of Medicine’s Computer Age” provides a snapshot of physicians who, the author writes, are “caught in the crossfire of a profession being reshaped” by technology.

That author is Robert Wachter, MD, hospital medicine’s academic leader as well as the director of the hospital medicine division and interim chair of the department of medicine at University of California, San Francisco. In the book, he envisions an electronic future in which every hospital bed is wired, consults are done via video, physicians activate medical records by voice commands, and notes are populated through natural language processing, not point and click.

But Dr. Wachter makes it clear that in the here and now, doctors find their EHRs coming up short. He spoke with Today’s Hospitalist.

You write that medicine is being dehumanized by computers intruding into the physician-patient relationship. Is that a problem in the hospital?
I think it’s worse in the ambulatory setting. When we’re in the room with an inpatient, most of us really still are present, making eye contact and, if we’re thinking about it, sitting down and paying attention to the things patients care about. That’s probably getting better because of pressures from value-based purchasing.

The way it plays out in the hospital is more around the geographic separation among clinicians and between clinicians and patients. You finish your rounds and then go somewhere else to be a data-entry clerk for several hours. That worries me because I think it pulls us away from patients and nurses.

You make the case that current EHRs need to be redesigned. What are key redesign elements you’d like to see?
Alerts and decision-support mechanisms are at the top of the list. Those have tremendous potential, but they have been designed in ways that are everything from user-unfriendly to sometimes frankly dangerous.

No. 2 is the note. Physician documentation needs to be completely rethought, both in terms of the amount of input and the fact that notes have become bloated messes that do not provide usable information. That’s a software redesign issue, but also a frontline practice redesign issue. We have to rethink how to write a good note in the digital era.

And the third is our communication tools, which is a pretty broad category. We need to rethink the pager, rethink how doctors and nurses communicate with each other, and how we communicate with other physicians. Is the doctor’s note in one tab and the nurse’s note under another, and never the twain shall meet?

People generally don’t look at notes written by people outside their tribe. But is that really the right way to document in a world where we are now used to streaming data or homepages on Facebook or Twitter? We’ve just electronified some very siloed practices and, to some extent, made them worse.

Clearly, many hospitalists “at least on a local level “are engaged in just that type of redesign.
That is really promising, and frontline clinicians have to be intimately involved in system redesign. We need to at least have a seat at the table, if not at the head of the table, in understanding how systems are created and how they interact with our daily work.

Just the fact that there is this thing called the chief medical information officer or clinical informaticist is important to appreciate, someone who spans the fields of clinical medicine and informatics. It’s no surprise that hospitalists often inhabit those roles because they have such a deep understanding of the various ecosystems in the building. Very few other people take care of patients on the wards, see patients on surgery, go to the ICU and go to the ED. So it’s a natural fit.

Part of what I hope to provoke in the book is more out-of-the-box thinking and a better recognition that just getting an electronic medical record installed and running is job one, but only job one. Yes, vendors have to produce better software, but we also have to think hard about the nature of our work and how these new tools can support it.

A major complaint from hospitalists is how hard it is to share all the redesigning they do.
Different brands of EHRs have active user groups, and I think there is a pretty decent amount of sharing of best practices. What has not been resolved is the question of local control vs. central control of innovation.

We have permitted local redesign, and that’s partly because every place is fairly different. But we don’t have a good process to communicate those local innovations back to vendors so they make it a fix for everybody. Right now, that process is very slow and imperfect, but the worst thing that could happen is that individual sites come up with their own solutions and nobody talks to each other.

You write about how computers have led to “deskilling” in pilots, some of whom can’t fly a plane if the computers fail. Is that a threat in medicine?
It’s too early for that, partly because our systems are so bad! Deskilling gets problematic when systems get really good and people essentially give up control to a computer. But I describe a case that took place in my hospital where a young nurse administered an order that, in retrospect, was clearly absurd, giving a child 39 antibiotic pills instead of one.

I’ve likened that to seeing a sign on the highway that says the speed limit is 2,500 miles per hour, and saying “OK, I’ll speed up.” But the fact that the technology “in this case, the bar code system “signaled to the nurse that the dose was right was enough for her to overrule her own common sense that this dose had to be wrong. Part of this is learning how to trust your instinct and not automatically say, “This computer is so good, so smart and so expensive, it must be right.”

You also describe how digitizing imaging has removed radiologists from any connection with colleagues.
About five years ago, radiology was the most popular specialty among medical students, and it has tanked in the last few years. This decline stems partly from the feeling among radiologists that they are now out of the loop, and part is this existential sense that the field may ultimately be replaced by technology.

These relationships carry massive value, and it is sometimes only after they go away that you realize what value they had. I wanted to elevate the issue of collegial relationships, which are important and rich and nuanced and, at least today, cannot be completely replaced with communicating to each other through notes and apps.

But the next trick is not to be too nostalgic. You have to take advantage of new technologies because the pressure to be efficient is not going away. We need to figure out how to get people to communicate with one another, in person when that’s possible, and to use new digital tools when it’s not.

We then need to reimagine what those relationships look like in a digital environment. We’ve come to recognize that if we don’t address these issues head on, the natural forces of digitization will inexorably separate people from one another.