TURNING THE VOLUME UP, not down, may be the surprising solution to a better night’s sleep for patients in the hospital. That’s the conclusion of a new study that compared sound and light disruptions in the ICU to those on the floors.

First, researchers found (as they expected) that baseline sound is lower on the wards than in intensive care, says Stuti Jaiswal, MD, PhD, lead author of the study that was published in the October 2017 issue of Journal of Hospital Medicine. But they also found that when baseline sound is lower, sudden noises like laughter in the hallway or the clatter of dropped equipment sound even louder—and disrupt sleep even more. That explains why, in both the wards and the ICU, researchers learned that it was the changes in sound levels that interrupt sleep and upend solutions, not higher baseline sound levels in and of themselves.

“If waking people up is the problem, lowering baseline sound volume—by, say, giving patients ear plugs—isn’t the solution,” says Dr. Jaiswal, a hospitalist and researcher with Scripps in San Diego. Instead, the answer may be increasing baseline levels by interjecting more white noise, so sudden volume peaks aren’t so extreme.

“There was just as much potential on the wards as in the ICU for sleep disruption and fragmentation due to changing sound levels.” 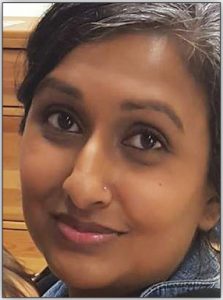 The study also found that light was a big problem, but again for an unexpected reason. Instead of the hospital being too bright at night, the research indicated that it was low light in the early morning that hurt patients’ sleep.

Researchers recorded sound and light in eight general wards, eight telemetry rooms, and eight ICU rooms for between 24 and 72 hours at Scripps Green Hospital in La Jolla, Calif. Meters were placed near the head of the bed, and all rooms had a window. Researchers looked for sound peaks across 24 hours and at night (10 p.m.-6 a.m.).

Dr. Jaiswal hopes the study’s conclusions—including the fact that it’s sudden spikes in sound levels that are the problem, not baseline levels—will prompt hospitalists to better understand sleep disruption and rethink possible solutions. She discussed the study results with Today’s Hospitalist.

Why is addressing sleep in the hospital so important?
People know intuitively that good sleep begets good health, and poor sleep is linked to poor health outcomes and conditions like diabetes and obesity. In the hospital, less sleep has been associated with higher blood pressure and sugar readings, so it’s important to think about modifiable factors. If sound is part of getting people to sleep better, that’s an intervention that’s not invasive, difficult or harmful.

What did you learn about noise levels on floors compared to the ICU?
Baseline sound is a little lower on the wards: up to 53.7 decibels, compared to 60.3 decibels in the ICU. But there was just as much potential on the wards as in the ICU for sleep disruption and fragmentation due to changing sound levels, with both settings having sound-level changes of 17.5 decibels.

A prior study showed that abrupt changes in noise levels at this threshold can disrupt sleep. My guess is there’s a low-level hum in the ICU, maybe from medical equipment, which acts like white noise. That brings up the baseline, so sound-level changes at night may not be as significant. That’s not to say that the sleep environment in the ICU is good.

Are those achievable goals?
I don’t know if those are feasible. I used a sound and light meter in my house, and with a newborn baby and two dogs, the baseline noise level was frequently higher than 35 decibels. Plus, the goal is to improve sleep, and changes in sound levels might be more important than the average level.

What surprised you most about the impact of light?
We were surprised to find how low light is in the early morning, almost lower than office light. Based on sleep research, we suspect that brighter light during the day, particularly in early morning hours, is important to maintain a normal sleep cycle. Instead, peak light levels, which weren’t that high, occurred in the afternoon or evening. That may not be the best light exposure pattern for optimal sleep.

What can help reduce changes in sound levels?
See if you can intervene on certain disruptive noises. Maybe there’s a way for IV alarms to sound only for nurses at night, for instance, not in patient rooms. And can we bundle care to reduce noise interruptions, perhaps doing vitals and labs at the same time to reduce the amount of noise in or even entry into a room? It doesn’t have to be a big intervention to drop sound-level peaks.

What about light?
Encouraging patients and staff to open curtains during the day to avoid dark rooms could help. Also, allow patients to get light exposure near a window throughout the day.

What have you tried in your own facility?
I’m hoping to design an intervention to look at white noise to improve sleep or to get patients near windows or even outdoors during the day. Some nurses here have recently started this informally. I realized they were working to improve noise on their floors when they asked to borrow my equipment to take measurements.

Some floors are also offering more control to patients, which some studies show can be important. Patients fill out a survey on how they’d like their room—with their door closed, for example, and curtain opened. That’s posted on their door and CNAs use it as a guide when they go in. And I realized when I was on the floor the other night that a nurse had offered a patient a white noise machine, which I thought was interesting.

How do you envision the hospital of the future promoting healthy sleep?
If you can build a new building, pay attention to the factors that improve sleep. That doesn’t always mean decreasing the overall sound level. In the future, patients may be able to remotely control the level of brightness and of white noise in their rooms, just like they now remotely control their TV. These interventions may not be as far off as we think.