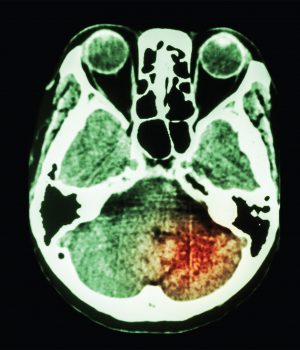 2015 WAS A HUGE YEAR for advances in ischemic stroke treatment, according to S. Andrew Josephson, MD, director of the neurohospitalist program and chair of neurology at the University of California, San Francisco (UCSF). That was the year when five major trials, all published in the New England Journal of Medicine (NEJM), established the effectiveness of using a new generation of endovascular devices—clot retrievers—in ischemic stroke patients within six hours of symptom onset.

But 2018 has proven to be another “revolutionary year for us in terms of positive trials and new data,” said Dr. Josephson, speaking at this year’s UCSF management of the hospitalized patient conference. The really big news this year was delivered by both the DAWN and the DEFUSE-3 trials (both published, again, in NEJM).

Those trials found that select patients with large vessel occlusions and favorable CT perfusion results could be treated with thrombectomy for up to 24 hours, well beyond the previous six-hour window.

“Many hospitals are struggling with, ‘What do we do with these patients now?’ “ 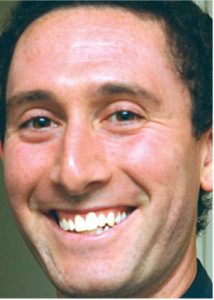 “Both trials showed that the earlier clots were removed, the better, and both were hugely positive” in finding benefit from thrombectomy in select patients, Dr. Josephson pointed out. But while that news signals “a revolution in stroke care,” it has also led to a necessary examination of hospital triage and ED protocols. “Many hospitals are struggling with, ‘What do we do with these patients now?’ ”

The importance of imaging
For many years, said Dr. Josephson, the protocol used at UCSF for suspected acute stroke and TIA patients has included a noncontrast head CT—”because not even the best stroke neurologist can tell the difference between an ischemic stroke and the 15% of patients having a hemorrhagic stroke”—as well as a CT angiogram of the head and neck and a CT perfusion study.

“Before this year, I would have said that some of these additional studies” beyond the noncontrast head CT “helped and some didn’t,” he pointed out. “But now in 2018, you really need to be doing all of this acute stroke imaging in eligible patients.”

That’s because CT angiography can help you pinpoint right where a clot is sitting and whether the patient is eligible for thrombectomy. And importantly, CT perfusion shows the areas of the brain that aren’t functioning the way they should.

“For infarcted tissue identified on perfusion, there’s nothing you can do,” said Dr. Josephson. “But areas that are ischemic and not yet infarcted can be saved if you can get blood to those parts of the brain very quickly.” When you’re examining a patient with severe deficits, “you can’t tell how many of those deficits are reversible. That’s where perfusion imaging helps to show how much of the brain can be salvaged.” The two new trials used perfusion-based imaging to select those patients between six and 24 hours after symptom onset who could benefit from thrombectomy. 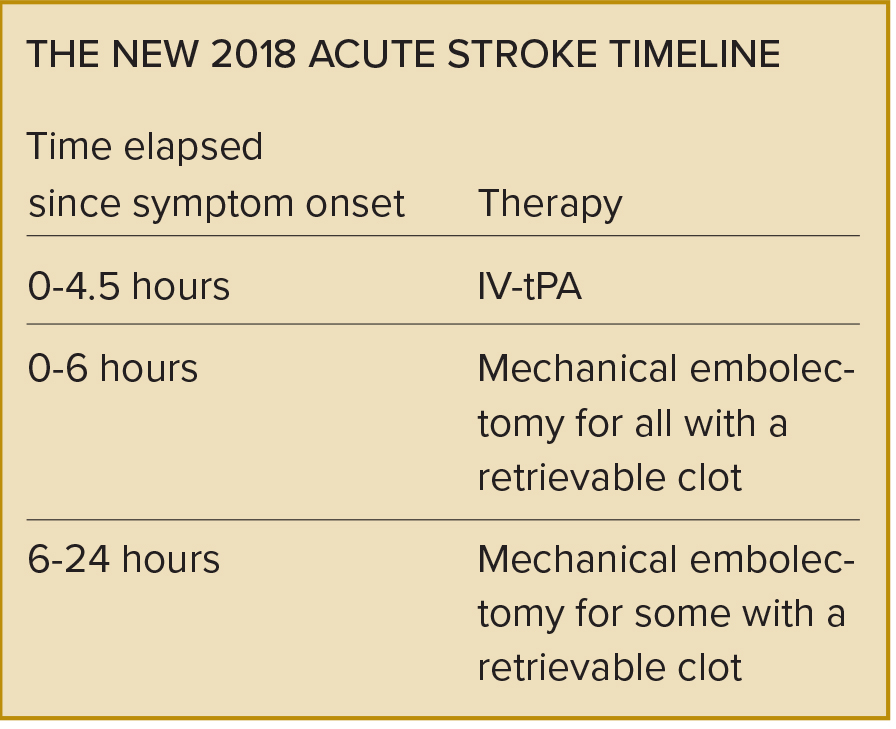 Transfers to thrombectomy centers
But as Dr. Josephson pointed out in a viewpoint article he co-authored in the Sept. 25, 2018, issue of the Journal of the American Medical Association, these new results have created several problems for hospitals. For one, the hub-and-spoke model for stroke patients—where the hub is a stroke center that can perform thrombectomy and the spokes are hospitals referring patients to that hub—is not as well-established in the U.S. as that model is for MI patients.

Further, many hospitals don’t have the perfusion imaging capacity or expertise they need to find out if patients outside the standard six-hour treatment window would benefit from being transferred to a center for thrombectomy. While hospitals can buy automated perfusion software, many haven’t yet made that substantial investment.

“I would argue that most hospitals on admission should do a CT angiogram and a perfusion study to understand whether a particular patient should be transferred” if your hospital can’t perform thrombectomy, said Dr. Josephson. “All hospitalists should be having this discussion about protocols within their hospitals.”

And “everybody who has a favorable perfusion scan can now get to a center that can take out these clots within 24 hours,” Dr. Josephson said. That’s true even for patients in very rural communities who can be transferred via medical helicopter. He does not believe that it’s OK to continue to tell eligible patients: “You’re at a hospital where we don’t have this capability, and we can’t get you somewhere that does.”

Help for patients with “wake-up strokes”
While the expanded time frame for thrombectomy for some patients was this year’s big stroke headline, there was other news. A study in the Aug. 16, 2018, NEJM, for instance, has implications for using IV-tPA in cases where clinicians can’t identify when a patient’s symptoms began. Currently, IV-tPA can be used only within 4.5 hours of the last time patients were seen to be normal.

“Researchers were particularly interested in patients with what we call ‘wake-up strokes,’ ” Dr. Josephson said. The study found that a DWI-FLAIR mismatch— where an MRI with diffusion-weighted imaging (DWI) shows ischemic lesions but there’s no parenchymal hyperintensity on fluid-attenuated inversion recovery (FLAIR) in that same region—did indicate that the stroke had probably occurred within the previous 4.5 hours, making those patients newly eligible for IV-tPA. Patients in the study who had that mismatch and were then randomized to IV-tPA instead of placebo had better 90-day outcomes.

But Dr. Josephson pointed out this problem: “This requires an urgent MRI, which very few places can pull off in the ED, so right now it’s impractical.” If more EDs acquire that capability, however, “there will be more of a push to give IV-tPA to select patients.”

A role for dual antiplatelets
And in the world of stroke, the three effective antiplatelet options for secondary prevention include aspirin, aspirin-dipyridamole (Aggrenox) and clopidogrel (Plavix).

Multiple large studies in both neurology and cardiology have demonstrated no long-term benefit to using dual antiplatelets, “just more bleeding,” Dr. Josephson said. However, “in 2018, we have some new data.”

The POINT trial results were published in the July 19, 2018, NEJM. That study was “a massive North American trial” that replicated one carried out in China and published in 2013. The POINT authors wanted to test in a more diverse population whether there was any benefit to doubling up with both clopidogrel and aspirin in the short period of time just after patients had a stroke or TIA, when their risk of recurrence is the highest.

“Researchers decided to give dual therapy for only 90 days and only to patients with a low risk of bleeding,” Dr. Josephson explained. Because bleeding risk is proportional to how large the area of patients’ dead tissue is, only patients with a TIA or a minor stroke (those with a stroke scale score of 3 or less) were randomized to either aspirin plus placebo or aspirin plus clopidogrel for 90 days.

The results: a modest reduction in recurring events with dual therapy and almost no increased hemorrhage. “In fact, all the hemorrhages occurred closer to 90 days,” said Dr. Josephson. “Some of us have started prescribing dual antiplatelets to these select patients for only 30 days.”

PFOs: Which ones should be closed?
WHAT SHOULD YOU DO with stroke patients who have a patent foramen ovale (PFO)? That’s about 20% of the general population, including stroke patients.

“A PFO alone doesn’t really increase the risk of a second stroke unless it’s large or there’s an out-pouching of the intra-atrial septum, a so-called atrial septal aneurysm,” said S. Andrew Josephson, MD, the director of the neurohospitalist program at University of California, San Francisco (UCSF), speaking at a recent conference there. “These patients are at higher risk of secondary stroke.”

Until recently, Dr. Josephson added, “we didn’t understand what we should do for these patients.” Cardiologists used to routinely close PFOs until three major trials in the last few years established that closure wasn’t any better for secondary prevention than antiplatelets.

However, three additional trials published last year were all positive; those trials delved into subgroups of stroke patients with PFOs. That research indicated that patients benefited from PFO closure if they fell into all three of these categories: They didn’t know why their embolic stroke had occurred; they were younger than age 60; and they had a moderate or large PFO, determined by a bubble study.

“It’s really important that you have a discussion with your cardiologists to decide the rules of the road,” he said. “Who are you going to close?” (Dr. Josephson also noted that the trials did not find PFO closure to be effective among those who’d suffered a TIA instead of a stroke.) At UCSF, all stroke patients are screened with a bubble study to see if they have a PFO. If they do—and if they are under age 60 and their stroke was caused by that PFO—”we believe they will benefit from a closure. If not, the treatment is antiplatelets, and anticoagulants offer no advantage in this particular situation.”

When considering closure, Dr. Josephson said, doctors need to discuss with patients their increased risk. After a PFO is closed, for instance, patients’ risk of developing A fib is higher. Also, “closure devices have been in people only a decade at most. We assume they’re safe for a longer period of time, but there aren’t good data.”

Most people are put on dual antiplatelet therapy when their PFO is closed, then transitioned to monotherapy. “But if they develop A fib, they’re probably stuck with an anticoagulant and an antiplatelet.” And when patients have the device put in, “that’s when they have the stroke risk,” Dr. Josephson said. “They have to balance that against the stroke risk spread out over many years if they don’t get the device.”