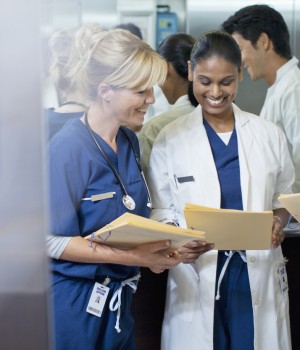 Sometimes, the cliches about teamwork are enough to make my stomach turn. Having played sports for many years, I am no stranger to the phrase, barked in my face by a coach, “There is no ‘i’ in the word ‘Team!’ ” And in the course of completing an MBA, I have become reacquainted with such aphorisms as “TEAM=Together Everyone Achieves More” and “A job worth doing is worth doing together.”

But we shouldn’t dismiss these slogans too quickly. When it comes to hospitalist medicine, teamwork–although it is just as susceptible to becoming a sound bite and a clichÃ©–is a big part of what I would call a new era and a new mindset in medicine.

The new paradigm requires both more team members and better teamwork among them. It also requires all members of the team to be equals, especially when it comes to case managers, social workers and, perhaps most importantly, nurses.

Talking with veteran nurses always provides some comic relief: They remember the days of old, several decades gone, when they donned starched white hats and obediently followed behind a physician, chart in hand. Given little or no autonomy, these nurses had scant input into a patient’s plan of care.

Fortunately, those days have been swept away by the tides of change. Hospitalist medicine has built on those changes and accelerated the changing dynamics of the inpatient team by chipping away at the hierarchies that existed for so long between nurses and doctors.

I’m not suggesting that those hierarchies have been totally wiped off the map– but thankfully, exceptions to the new rule are few and far between, especially within the last 10 years. The dinosaur physician with an oversized ego and uncontrollable temper has become a rarity in the medicine wards, due at least in part to the growth of the hospitalist movement. We hospitalists understand that, to do our jobs well, we all need to work together and that the nursing staff plays a particularly indispensable role in the kind of team we need. Among other benefits, teamwork has brought about reduced lengths of stay and better relationships between caregivers and patients.

It goes without saying that cultivating an atmosphere of mutual respect and civility among colleagues and co-workers is the right way to go, as is making sure those co-workers are substantively involved in the process of care. That is the case no matter what metric of success you use, and such efforts pay off in the kind of days where everything comes together and works well.

Case in point: I recently finished my first year as the medical director of the hospitalist program at Virtua Memorial Hospital; I was hired to help transform a subcontracted hospitalist program into a hospital-employed model. By most measures, it was a very successful year. Our program is now well respected, our doctors are generally happy with their positions and my administration is extremely positive about how the new program has evolved.

But there is this icing on the cake. When I came to Virtua, it was clear that the hospitalists and nurses did not have the kind of good working relationship that I had grown accustomed to at previous programs, where we were equal partners with the shared goal of excellent patient care. Many of the hospitalists had excellent rapport with the nurses before I arrived. But what I thought was missing was the concept and implementation of teamwork that comes about when everyone truly believes that they are on the same team.

So when I was recently awarded the “Friend of Nursing” award, which is given annually to the physician who best demonstrates an approach to care defined by collaboration with the nursing staff, I counted it as proof that the hospitalist program was on the right track. Although only one physician can receive the award, it is clear to me that earning it was possible only because I was backed by a true team of hospitalists. And that is no clichÃ©.