SUICIDAL IDEATION is the chest pain of psychiatry. It’s common, potentially dangerous and fantastically resource-intensive. If you’re like most hospitalists, there are always a few cases on your service.

But those are the obvious presentations like overdoses, jumps and gunshots. There’s a lot of hidden disease—the cancer patient who’s losing hope, the stroke patient with life-changing neurological deficits—just waiting to be found. But that would involve uncomfortable conversations and considerable uncertainty about what to do next. Sometimes, it seems easier to not know.

Coin flip
Let’s suppose you want to know—that you want to screen everyone admitted to your service for suicide. (One example: Parkland Hospital in Dallas has had a universal screening program in place since 2015.) Or maybe you want an organized, evidence-based approach when someone hints at suicide or spills the beans. How to proceed?

Our ability to predict suicide is really poor.

This is where the suicide and chest pain literature diverge sharply. As much as we begrudge all the negative chest pain work-ups, we’ve become really good at ruling out calamity. A patient’s presentation may defy explanation—esophageal spasm?—but at least we can say with confidence what it’s not.

Not so with suicide. The art has changed little in a half century, and our ability to predict suicide is really poor.

I have more than a casual interest in this morbid subject. My current “hospitals” are two county jails where I serve as medical director. Today, the combined census is 296, and suicide—thoughts, urges, behaviors— is hands-down our most common problem.

I’ve taken a good look at the literature and it’s left me depressed. Actually, Joseph Franklin, PhD, a psychologist at Florida State University, and nine colleagues did all the heavy lifting (but I’m still depressed). Their meta-analysis in the February 2017 issue of Psychological Bulletin considered 365 studies dealing with a host of risk factors for suicide like depression, hopelessness and addiction.

The whole thing runs 46 pages and contains a lot of nuance. But ultimately, it came down to this: Our ability to predict suicidal thoughts and behaviors has “the same degree of accuracy as someone with no knowledge of the patient who predicted based on a coin flip.”

Now what?
Does that mean you’re off the hook? No. While the standard of care is crappy, it’s still the standard to which you’re held. You need to do something. The question is what.

I cast about for tools and eventually landed on the one here. It’s brief, psychometrically sound and has a decent theoretical basis.

The Suicidal Affect-Behavior Cognition Scale (SABCS) was developed by Keith Harris, PhD, who’s with the University of Queensland, and his collaborators. And it was published in PLOS One, the open access journal, so you can use it for free. The opening question deals with suicidal behavior, while other items explore cognitions about suicide, including the patient’s internal debate about living and dying.

Admittedly, this is inherently subjective and requires a suicide barometer for interpretation. (The PLOS One article includes just such a barometer, which is well worth a look.) But when it comes down to defending your clinical reasoning, how you conceptualize a patient’s case is always the name of the game.

SABCS also generates numbers, which is a quick way to trend symptoms over time. A total score that goes down day to day might support your decision to discharge your patient to home. On the flip side, a static or rising score will help you fend off the utilization review people—the “money badgers”—who want to know why your patient is still taking up one of their beds.

But beware of “faking good,” patients who give you reassuring answers so they can get out of the hospital. SABCS is just one piece in the larger suicide puzzle, and you might have other reasons to continue hospitalization despite the seemingly favorable story. 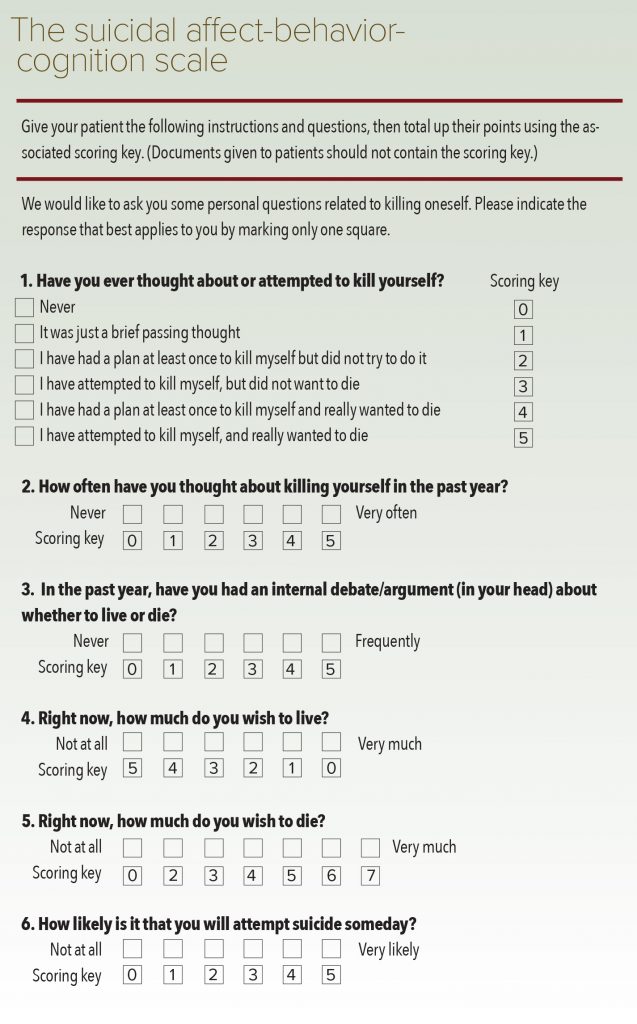