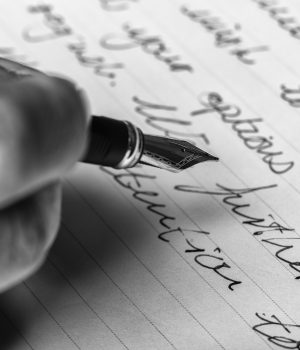 WHILE SCRIBES have made deep inroads into emergency and outpatient medicine, their role in hospital medicine has been much more tentative. Could using scribes decrease hospitalists’ burden of documentation and streamline admissions and ED throughput?

The hospitalists at UNC REX Hospital in Raleigh, N.C., decided to find out. Group members implemented a 20-week pilot that paired them with scribes on admitting shifts. The group also surveyed physicians before and after the pilot about their sense of their own work satisfaction and about how much time they’d spent on documentation during those shifts.

The results were impressive, explains Meera Udayakumar, MD, the hospitalist medical director and chair of the medicine department. Before the pilot, only 13% of hospitalists reported spending less than 15 minutes per admission on documentation. With a scribe, that figure jumped to 50%, a 37% absolute increase, according to an abstract presented at this year’s Society of Hospital Medicine annual meeting. Meanwhile, the percentage who felt their number of patient encounters was manageable jumped from 31% to 87%—even though, according to the data, the hospitalists with scribes weren’t actually seeing any more or any fewer patients.

“When are we going to move away from the idea of having a scribe physically located in the same room?” 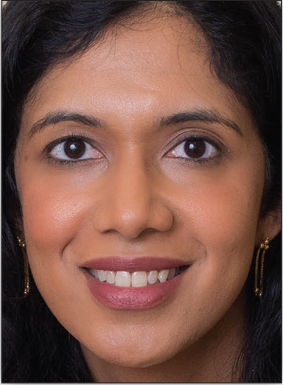 Don’t those improvements speak to how scribes might improve physician wellness and career satisfaction? Yes, they do, Dr. Udayakumar says.

“I think there can be an impact on burnout,” she says. “Burnout and career disengagement have been linked to time spent documenting in the electronic medical record.” And while the number of RVUs captured and of patients seen per shift didn’t increase with scribes, “we actually saw an improvement in the time from the decision to admit order to patients leaving the ED.”

But the use of scribes brought its own set of dissatisifiers. When the pilot ended in August 2018, the group decided—for the time being, at least—to not continue with the innovation.

The problem with onboarding
UNC REX’s hospitalists decided to pilot the use of scribes on only the admitting shift because, says Dr. Udayakumar, “one of our goals was to reduce time spent on documentation. The admission history and physical usually takes more time than a subsequent visit note.”

But if they had used scribes while rounding, on the other hand, “each scribe would have been with the same hospitalist for multiple days, which would have made onboarding them much easier.” That speaks to a major challenge the group ran into.

“Each hospitalist has preferences as to how to present material in the medical record—and there is variation among us, even though we all follow the same H&P admission template,” Dr. Udayakumar says. When working with individual scribes, “for the first few shifts, I spent a lot of time editing their notes to fit my documentation style,” she adds. “I would then give them verbal feedback on the points to address and level of detail.”

Do you have scribes specifically trained in hospital medicine work? Read “Is there a scribe in your future?”

But because hospitalists are assigned to an admitting shift for only a day at a time, they may not be back admitting for weeks. Meanwhile, each scribe over the course of a month might work with between five and 10 different hospitalists.

That meant that scribes had to learn the styles of multiple hospitalists “and keep track of who wants what,” Dr. Udayakumar says. That also meant that each hospitalist’s responsibility for getting scribes up to speed on those preferences became considerable.

A tough learning curve
Other factors compounded that onboarding problem. For one, some scribes learned doctors’ preferences quickly and actively sought feedback, while “others needed more guidance,” Dr. Udayakumar says. And while she used the same scribe agency as her hospital’s emergency department, she and her colleagues found that the scribes had quite a learning curve adapting to hospital medicine.

That was a problem, particularly because documentation requirements are becoming more stringent. “It’s not enough to just outline the plan, but we need to be mindful of our specific terminology,” she says. “That has downstream implications for level of care and quality metrics, so that’s a lot of responsibility to put on the scribe.”

Then there was scribes’ high rate of turnover. “The scribes we were working with were brand new and saw this as a bridge to medical or PA school, not a long-term career,” she says. “It seemed like we would be investing a lot of hospitalist time repeatedly in onboarding, then not having enough time to reap the benefits before we would have to onboard again.”

To minimize those efforts, Dr. Udayakumar says she asked the scribe agency for candidates who had more experience with hospital medicine.

Unfortunately, she notes, “that was not possible.” After presenting the hospitalist team the data on the costs of the program, survey results, RVU capture, number of patients seen and ED throughput, as well as on turnover, she asked team members whether the program was worth continuing. “A majority elected to end the program based on the need to repeatedly invest hospitalist time in onboarding.”

Digital scribes?
If those obstacles could be cleared, however, “I would re-evaluate the whole model to see if there was a better role for scribes on rounding shifts,” Dr. Udayakumar says. That might not necessarily entail every subsequent visit, “but maybe for the first follow-up visit or on the day of discharge, both of which require more documentation.”

She also is very curious to see where artificial intelligence may go in this space and when virtual—or digital—scribes will become a viable option.

“When are we going to move away from the idea of having a scribe physically located in the same room?” she asks, adding that having an electronic option could avoid the problem of turnover. “If circumstances change and we are able to better leverage technology to address our documentation burden, we will come back to this.”

Scribe use and physician satisfaction

AT UNC REX HOSPITAL in Raleigh, N.C., hospitalist leaders did before-and-after surveys around a pilot program that paired admitters with a scribe. Here is how the hospitalists responded to several survey statements: 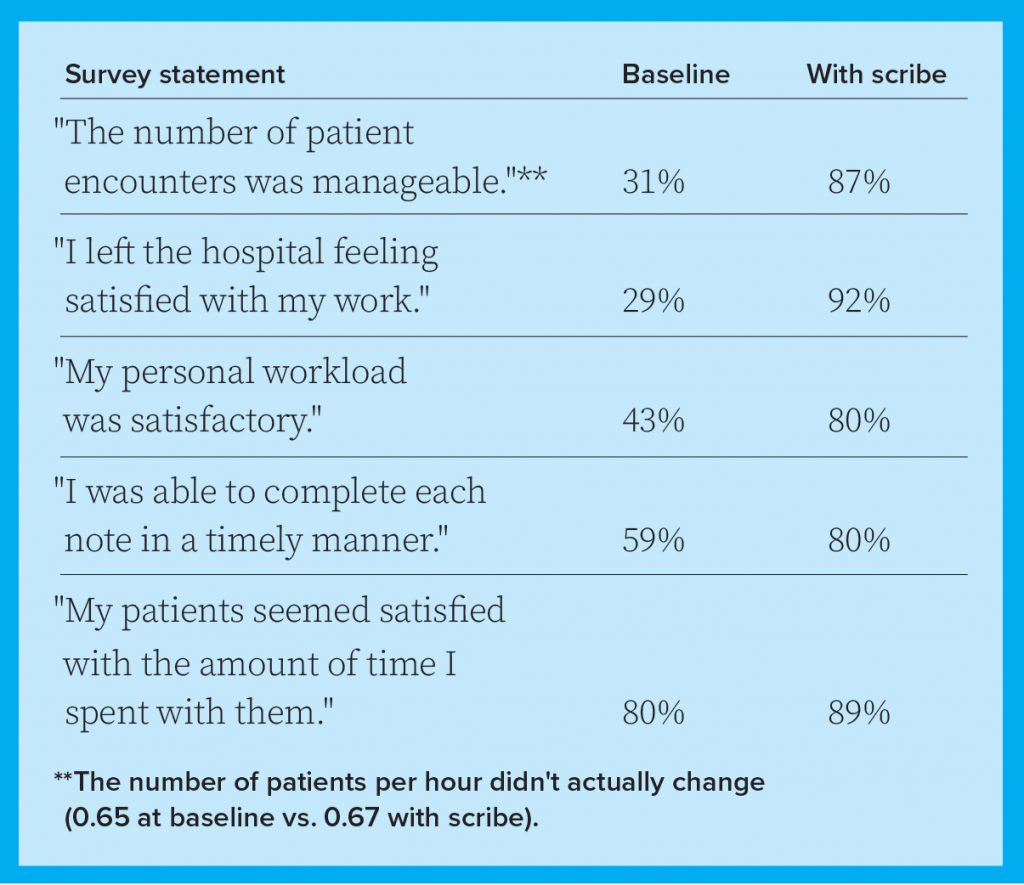 Published in the August 2019 issue of Today’s Hospitalist