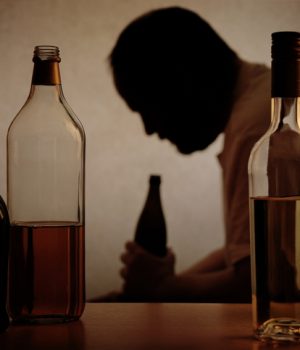 In the meantime, alcohol continues to quietly ruin lives at a prodigious rate. The latest wave of the National Epidemiologic Survey on Alcohol and Related Conditions found that 13.9% of Americans struggle with addiction to alcohol in any given year. That same study determined that the annual prevalence of addiction to heroin and prescription opioids was 0.7% and 0.9%, respectively. While those latter numbers aren’t trivial, they certainly give you a sobering sense of perspective.

Not surprisingly, alcohol problems in the general population tend to concentrate in hospitals. The data on this are all over, but 20% is a very safe estimate of the inpatient prevalence.

Alcohol continues to quietly ruin lives at a prodigious rate.

Sometimes addiction is completely obvious—cirrhosis, recurrent pancreatitis—but those aren’t the cases I worry about. I’m far more concerned about the hip fracture or subdural that was secondary to falls associated with surreptitious drinking. Or the postop patient who will be delirious or seize in a couple days due to alcohol withdrawal.

Screening
The U.S. Preventive Services Task Force publishes the most robust screening evidence on the planet. It currently recommends screening all adults 18 years of age or older for unhealthy alcohol use. But there’s a key caveat: The guideline applies to primary care.

The Joint Commission has included screening for unhealthy alcohol use in its 2020 national quality measures. Accredited hospitals will be required to report how often they screened patients and then intervened in positive cases. Currently, these are process measures where the goal is institutional improvement over time rather than an external benchmark.

Some screening is probably better than none. But I’d encourage you to shoot for the moon. An investigation written up in the September 2017 Journal of Hepatology demonstrated that universal screening for unhealthy alcohol use is feasible. More than 53,000 patients were admitted to the hospital during the nearly three-year study, and bedside nurses were able to screen 91% of them. Patients who weren’t screened had shorter lengths of stay, including same-day discharges, a higher AMA rate and impaired level of consciousness.

Screening tools
A bevy of screening instruments exist. The venerable CAGE Questionnaire was developed in 1968 and has been taught in medical school since time immemorial. There’s also the equally old Michigan Alcoholism Screening Test and a host of other contenders.

The Alcohol Use Disorders Identification Test (AUDIT) is generally considered state of the art and has received the Joint Commission’s imprimatur. First published in 1993, it’s currently in the public domain courtesy of the World Health Organization.

The original AUDIT—there have been a number of adaptations—consisted of 10 questions about hazardous as well as harmful alcohol use and symptoms consistent with addiction. Here’s one item from each domain:

• How often do you have a drink containing alcohol?

• How often during the last year have you been unable to remember what happened the night before because you had been drinking?

• How often during the last year have you failed to do what was normally expected from you because of drinking?

Each question has five response options, and the total score can range from 0 to 40. Scores above 7 are generally considered a positive screen.

Psychometrics
The big question is: Positive for what?

AUDIT detects unhealthy alcohol use, defined by the American Society of Addiction Medicine as “any use that increases the risk or likelihood for health consequences (hazardous use), or has already led to health consequences (harmful use).” As such, AUDIT looks for a broad spectrum of problem drinking ranging from potentially risky to actually severe, where the latter is addiction per the Diagnostic and Statistical Manual of Mental Disorders.

Most AUDIT studies have been conducted in nonclinical populations and primary care. Investigations involving general hospital wards found that AUDIT’s sensitivity ranged from 0.66-0.97, with a specificity of 0.90-0.96. A noteworthy study from the November-December 2005 issue of Alcohol & Alcoholism determined that AUDIT was useful for ruling out the potential for clinically significant alcohol withdrawal (sensitivity, 1.00; specificity, 0.91).

Sensitivity and specificity are largely meaningless without additional context. And that context is prevalence—that is, how common something is in the population you’re serving. See “Predicting clinically significant alcohol withdrawal” for AUDIT’s positive and negative predictive value.

Evidence in action
Let’s take the hypothetical example of Mr. Jones, a 62-year-old carpenter, who wound up on your service due to a small bowel obstruction. His wife pulled you aside to express concern about his drinking.

You administer the AUDIT and Mr. Jones’s total score is 10, which is a positive screen. You advise him that this number is consistent with unhealthy alcohol use and that he has a 36% chance of developing clinically significant withdrawal in the coming days. You order the hospital’s alcohol withdrawal protocol out of an abundance of caution—but ultimately, he didn’t require any benzodiazepines during his hospital course. 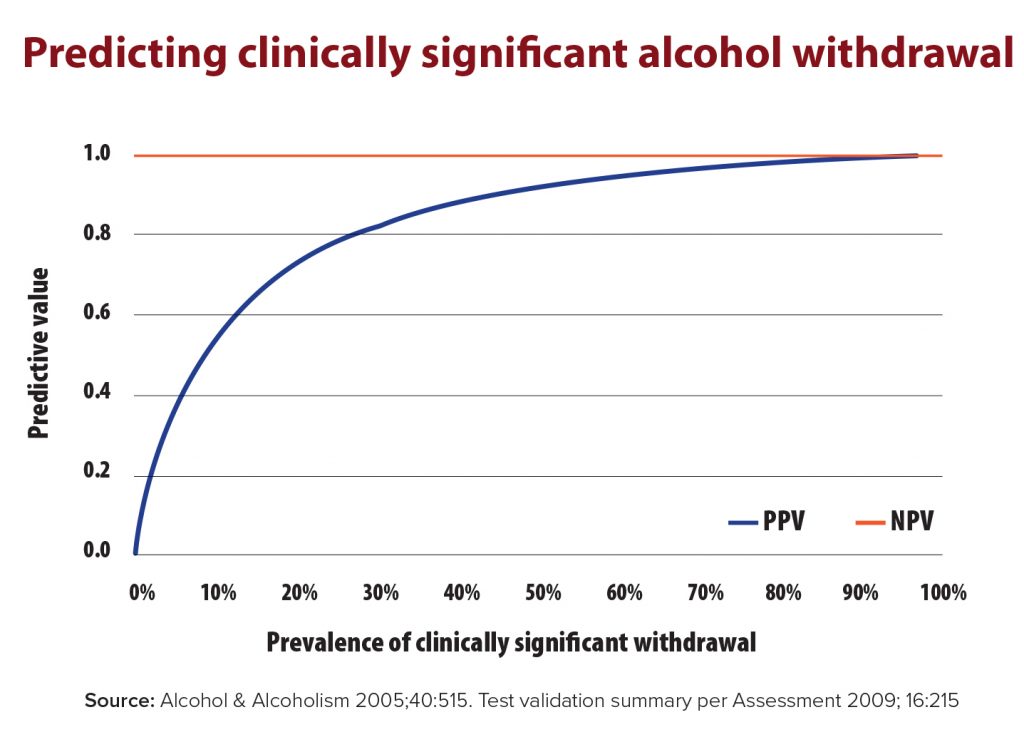 This chart shows the positive predictive value (PPV) and negative predictive value (NPV) of AUDIT (Alcohol Use Disorders Identification Test) as a function of prevalence (base rate). When the prevalence of clinically significant withdrawal is 5%—a reasonable base rate on inpatient 0.4 wards—the PPV and NPV are 0.36 and 1.00, respectively. PPV is the percentage of patients with a positive AUDIT who will develop clinically significant withdrawal, while NPV is that percentage of patients with a negative AUDIT who will not.