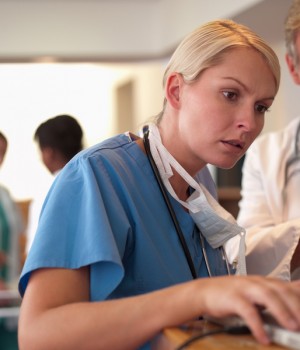 WHILE PHYSICIANS EVERYWHERE are suffering from electronic alert fatigue, that hasn’t stopped the University of Colorado Hospital in Denver from creating a new – and important – alert to protect severely agitated patients with delirium.

Since last year, a critical alert has been popping up on the hospital’s computer order-entry system when physicians order IV haloperidol (Haldol) for patients with a recent electrocardiogram (ECG) showing a QTc of at least 500 msec. (The ECG must have been captured and calculated by the hospital’s electronic medical record in the preceding 14 days.)

The alert warns that IV haloperidol is contraindicated for those patients because of QT-prolongation risk. It urges doctors to reconsider their medication choice or the drug’s delivery route.

How successful is the alert? According to preliminary analysis, doctors seem to ignore it about half the time and offer no reason for that decision. But the other half of the time, doctors change their minds about using the drug, reduce the dose ordered, or modify its method of administration from IV to IM injection.

Or they override the reconsider-recommendation but mention a valid reason for continuing the drug. The patient may be at the end of life and the drug’s benefits outweigh its cardiac risks, for instance. Or doctors may note that a patient’s QTc is falsely prolonged due to the fact that the QRS is prolonged.

And a 50% acceptance rate is considered pretty good. “About 95% of our alerts get blown by,” says Jonathan Pell, MD, a hospitalist who works as physician liaison to health IT and who has been working on the IV haloperidol quality improvement project.

“The problem with algorithms is that nothing in medicine is 100%,”Dr. Pell says. “We have to make sure we are not giving doctors alert fatigue to the point that they just blow by this one because it pops up too often.”

Black-box warning
The IV haloperidol alert is a work in progress, says Dr. Pell, and all data are preliminary. He notes that it helps that the alert pops up only between five and nine times a month.

But experts caring for the hospitalized elderly feel that addressing the misuse of IV haloperidol is worth getting right. One short-term goal, Dr. Pell adds, is to expand the alert to other QT-prolonging drug orders.

The University of Colorado’s effort started five years ago after the FDA issued a black-box warning that associated with QT prolongation and torsades de pointes (TdP). The warning followed what the agency said were “at least 28 case reports of QT prolongation and TdP in the medical literature, some with fatal outcome.”

The warning included a recommendation to use ECG monitoring in patients receiving the IV drug. The warning came on top of the fact that IV haloperidol for delirium at any time is an off-label use. The drug is nevertheless commonly used when patients with delirium have severe agitation.

In the wake of the black-box warning, Ethan Cumbler, MD, a hospitalist and director of the acute care for the elderly (ACE) service at the University of Colorado Hospital, began noticing that the drug was still being used throughout the hospital, sometimes even in the ACE unit. He and some colleagues began investigating how often IV haloperidol was being ordered “and whether those orders complied with expert recommendations for ECG monitoring. Their results were published in the January 2013 issue of the Journal of the American Geriatrics Society.

A never event?
That study found that between 2008 and 2010, more than half (58%) of patients older than 65 received IV haloperidol in a way that was “not concordant” with expert recommendations.

Specifically, 20% of patients did not have a baseline ECG prior to their first dose. Another 16% received the drug even though their ECG showed a QTc of at least 500 msec. And among patients whose ECG showed a
“moderately prolonged” QTc (450-499 msec), only 21% had a repeat ECG performed within 24 hours.

The good news? The retrospective study did not find any patients receiving IV haloperidol for whom there was a direct link to “sudden cardiac death, Torsades arrhythmias, ventricular fibrillation or ventricular tachycardia,” Dr. Cumbler says.

But he likens this prevention effort to that of preventing wrong-side surgery. “You create protections against amputating the wrong leg not because it is happening all the time,” he says, “but because it should never happen.”

Finding alternatives
Dr. Cumbler adds that alternative treatments for delirium-related agitation should be the first-line therapy. These include preventing the delirium in the first place or “treating or removing the precipitant,” such as a new infection, new electrolyte or metabolic abnormality, or a bothersome tether or invasive line. When an antipsychotic is still needed, Dr. Cumbler says, a better choice may be an oral dose or an IM injection.

“Hospitalists should be aware of the FDA black-box warning, and they should know what a patient’s QTc is before they prescribe,” Dr. Cumbler says. The obvious next intervention, he adds, is the kind of alert that Dr. Pell has helped implement.

“Physicians may order IV haloperidol on a cross-cover patient they are not familiar with in the middle of the night, often in a situation with a time urgency,” Dr. Cumbler says. “At 2 in the morning, when you have patients pulling out all of their lines, you are not going to remember an educational initiative. You instead need to build safety into the system.”

Building the right alert
According to Dr. Pell, having the alert in place is certainly a good start. But there are several questions that right now don’t have definitive answers.

For one, physicians on the clinical decision-support committee working on the project are still debating whether the alert needs to be a hard stop or if doctors should be able to continue to click their way through an IV haloperidol order.

Another point of debate is how far back in a patient’s record the computer should search for an ECG. The computer now searches the previous 14 days, but some committee members think that’s too far back. At the same time, Dr. Pell notes, you don’t want the computer searching only within the last day or two and missing many pertinent ECGs.

“We want to look back far enough to catch if an ECG was done on a patient, but if you look back multiple days, we don’t have the functionality to take only the last ECG,” he says. “That has to do with limitations of the alerting system.”