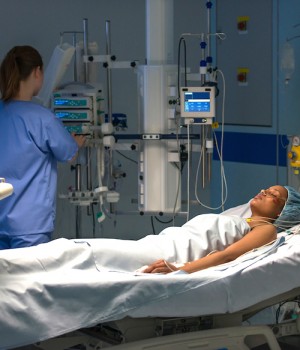 MOST EXPERTS THINK that the ongoing push to staff up ICUs at night should result in safer, more consistent care around the clock. But a new study finds that nighttime may not be the right time to extubate mechanically ventilated patients.

The retrospective analysis looked at 2000-09 data on more than 97,000 patients in 165 ICUs across the U.S. When researchers measured the outcomes of patients extubated at night vs. those extubated during the day, they found significantly higher mortality in the nighttime group for patients with ventilation durations of less than 12 hours: 5.6% vs. 4.6% in the ICU, and 8.3% vs. 7.0% in the hospital.

For patients with longer durations (12 hours or more), mortality rates for night vs. day extubations were 11.2% vs. 6.1% in the ICU and 16.0% vs. 11.1% in the hospital. The study is the first to report an association between nighttime extubations and higher mortality.

“The patient at night has to prove to me that she’s really, really ready for extubation.”

While that higher mortality was unexpected, it wasn’t the study’s only surprise. Researchers also found that the rate of nighttime extubations dropped from 23.3% in 2001 to 18.8% in 2009.

“The fact that overnight extubations decreased during that period surprised us,” says critical care physician Hayley Gershengorn, MD, the lead author and an associate professor of clinical medicine at New York’s Albert Einstein College of Medicine. Dr. Gershengorn practices at Montefiore Medical Center. “We thought health care’s focus on increasing ICU staffing at night would increase nighttime extubations, but that’s not what we found.”

While the findings on mortality don’t establish causality, they do indicate that overnight extubations might be riskier for many patients—for reasons that are not understood.

“We need more studies to determine why this is the case, even when ICUs are sufficiently staffed overnight,” she says. “It’s particularly important because in centers where physicians, nurses and respiratory therapists can appropriately select and manage extubations, there’s a lot of pressure to do the same work at night that they do during the day.”

While that’s not a bad thing, Dr. Gershengorn adds, “our study suggests that we need to think more about which patients are appropriate for extubation, regardless of the staffing level.”

Reintubation rates
Published in the September 2016 issue of JAMA Internal Medicine, the study produced a mixed bag of findings about other outcomes associated with nighttime extubations, which were defined as those occurring between 7 p.m. and 6:59 a.m.

The reintubation rate—the study’s primary endpoint—among patients ventilated 12 hours or longer was higher in the nighttime-extubated group than in those extubated during the day (14.6% vs. 12.4%.) Patients extubated at night were also more likely to have undergone elective procedures than patients extubated in the day (46.8% vs. 24.8%). And they had a higher incidence of cardiovascular diagnoses: 51.8% vs. 25.4%.

Dr. Gershengorn notes that a study published in the September 2015 issue of the Journal of Intensive Care was far smaller and covered only a single institution. That research found no increase in either reintubation or mortality rates in patients extubated overnight. Patients in that study were less likely to be reintubated if they’d been extubated at night than during the day (3.8% vs. 7.7%).

That single-site study, which was based on 2009-11 data, might reflect some of the clinical advances that have occurred since the data her study used were collected, she says. Those include techniques to increase high-flow oxygen delivery after extubation.

Further, clinical predictors of extubation success have also been refined in the intervening years, Dr. Gershengorn points out. Yet ICU physicians and other clinical staff still struggle with the question of when patients are ready for extubation.

Setting a higher bar
For hospitalists who work at night in the ICU, study findings might make them more wary about extubating patients at night unless the procedure cannot be avoided for clinical reasons. Such caution conflicts with the near-constant pressure that hospitalists and intensivists face to reduce length of stay. That’s especially the case because many studies have shown that earlier extubation, if clinically appropriate and successful, can reduce LOS by making it less likely that patients develop delirium and weakness.

“There are lots of reminders now about assessing intubation, and we constantly ask ourselves, ‘Do I really need to keep this patient on invasive mechanical ventilation?’ ” Dr. Gershengorn says. “But the increased mortality we saw in our study raises concerns. Overnight extubations and lower LOS might be good for the hospital, but not necessarily for the patients.”

Despite that pressure, she believes the study should motivate both hospitalists and intensivists to work on improving protocols. Those should include spontaneous-breathing trials to better guide the selection and timing of extubations, particularly at night.

“My bias, and what I go with, is that the patient at night has to prove to me that she’s really, really ready for extubation” in terms of vitals patterns and potentially problematic comorbidities, says Dr. Gershengorn. “I set a much higher bar at night, even though we have robust staffing.”

Upshot for hospitalists?
As for hospitalists, “I’d recommend not trying to extubate someone at 3 in the morning if you’re not already comfortable with that patient.” That’s particularly true in community settings where, Dr. Gershengorn adds, hospitalists must make sure they have good back-up available at night before deciding to extubate.

Key issues for hospitalists to consider include whether they’re making extubation decisions alone or jointly, she says, and “what kind of expert assistance is available if a problem occurs or you need to reintubate.”

And if you’re considering evaluating the outcomes of daytime vs. overnight extubations, Dr. Gershengorn advises focusing initially on short-stay surgery patients, including those with CABG, organ resection or bowel surgery, or GI-bleed patients with few comorbidities.

“It would be fairly easy to randomize these less sick patients to morning or night extubation because these tend to be less scary populations to trial,” she says. “You don’t want to start with patients with primary respiratory failure.”