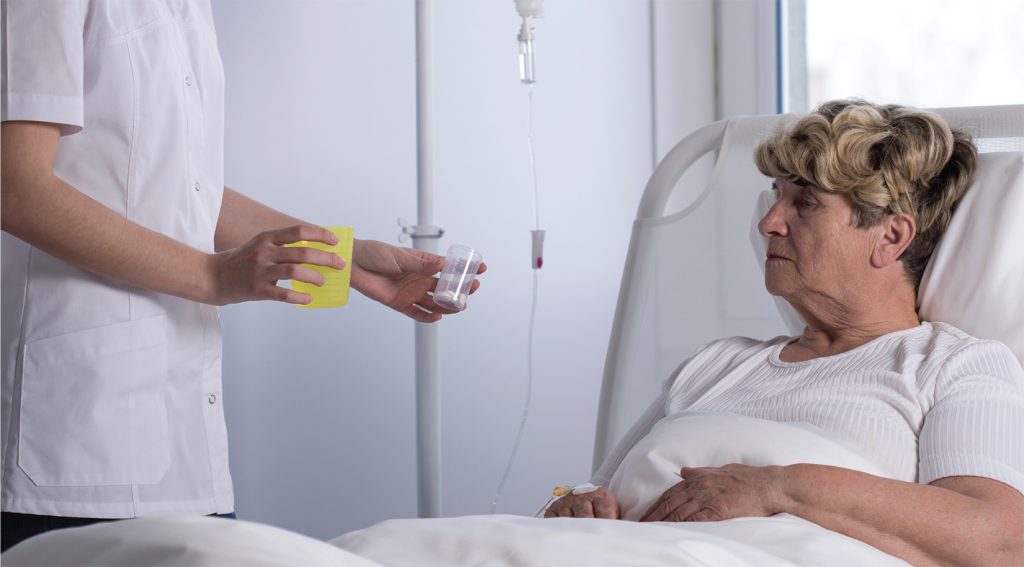 THE PROCESS OF transitioning patients from the acute to post-acute care setting, whether it be back to their home, a skilled nursing facility, or a long-term care facility involves multiple handoffs and can be very complex for healthcare providers. In addition to the challenges inherent in this process, the ramifications of any errors along the way can have serious consequences for patient health and hospital administration, such as readmissions and their associated costs, not to mention bed space and increased pressure on staff.

Dysphagia is commonly encountered in the acute care setting and further complicates effective transfer of care. A panel of hospital-based care providers convened to share their insights into the management of dysphagia in the hospital setting and concluded that the use of U.S. Food and Drug Administration (FDA)-approved liquid formulations can alleviate many of the concerns associated with crushing/compounding medications for this patient population when transitioning from the acute to post-acute care setting.

The Costs of Transitioning Patients Suffering with Dysphagia
Dysphagia affects approximately one quarter of elderly hospitalized patients.1 According to the National Institute on Aging, people aged 65 years and older are much more likely to develop heart failure (HF) than those under age 65.2 Therefore, hospital-based care providers are highly likely to encounter older patients who are experiencing both HF and dysphagia and should be prepared to ensure effective transfer of care for this population.

Readmissions for patients with HF within 30 days after hospital discharge are quite common, estimated at 25% of all cases.3 In a study that assessed readmission rates for patients originally admitted for HF, 8.4% were readmitted within 30 days, 13.4% within 60 days, and 16.7% within 90 days.4 In addition to being common, readmission for HF is expensive; $11,143 according to the results of one study.5

These statistics were found to be so shocking that the Centers for Medicare & Medicaid Services Hospital Readmission Reduction Program was introduced in 2012 to promote value-based care and penalize hospitals for excessive rates of readmission for HF.6

The faculty noted that some hospitals had an official transition of care program aligned with an outpatient group which assigns a nurse practitioner for each discharged patient. This process ensures that patients have their medications at discharge and verification after the patient is home. Conversely, the faculty described hospitals that simply discharge patients without having an official transition of care program instituted.

Instead, the program is predicated on hospital staff connecting with family and patients by phone to enquire about their physical status, follow up scheduling, and medication adherence. Because the goal of transition of care is to reduce readmissions and align with value-based care, the faculty determined that the best model provides an official transition of care program with an aligned nurse practitioner that can see patients if needed.

Actively managed transition of care programs are aimed at improving patient care and the financial health of the hospital. Medicare has decreased payments to over half of the nation’s hospitals since it began monitoring readmissions over a decade ago. This equates to over 47% of all US hospitals having seen a reduction in payments. On average, hospitals had over $217,000 withheld due to overtly high readmissions. Any efforts which aim to improve transitions of care and readmission were deemed as critical by the faculty.7

Challenges in the Medical Management of Patients with Dysphagia in the Hospital Setting
Crushing/Compounding medications that are normally administered orally may be the only way in which medications may be delivered for patients suffering with dysphagia. However, this approach is considered to be suboptimal for a variety of reasons.

• Potency. A review by Gudeman et al. in 2013 included a section on quality testing of compounded drugs by regulatory agencies that provided an abundance of evidence describing suboptimal outcomes of crushing medications.8 After becoming aware of 55 product quality problems associated with compounded medicines between 1990 and 2001, the FDA “conducted a limited survey of 29 different compounded medicines sourced from 12 compounding pharmacies, testing 8 different drugs of various dosage types (oral, injectable, topical, etc.) against established quality standards.”8 The survey results revealed that 10 out of 29 samples (34%) failed quality testing, most commonly for sub-standard potency, which ranged from 59 to 89 % of the target dose.9 This statistic is a far cry from the <2% failure rate observed for over 3,000 FDA-approved commercial products tested from 1996 to 2001.9 In a follow-up survey conducted in 2006, the FDA discovered that 12 of the 36 compounded products analyzed (33%) failed quality testing with a similar finding of potency problems, ranging from 68 to 268% of the labeled dosage.10 This same issue has been examined at the state level in Missouri, Ohio, and Texas, all of which describe high failure rates attributable to suboptimal potency.8 In a section of the Gudeman et al. review entitled, “Scientific Literature on the Quality of Compounded Drugs”, a host of studies documenting sub-optimal potency are cited.8

The faculty expressed several concerns regarding crushing at the bedside, most notably that it is difficult to know how much of the prescribed drug is actually making its way into the patients. For example, crushing in a bag or via mortar and pestle leaves residue which cannot be included in the delivered dose.

Additionally, sprinkling the crushed medicine on food, embedding it in food, or dissolving it in liquid may be ineffective, as it is dependent on the patient’s level of intake, which may not be total. The faculty noted that a lack of effect using a crushed medication may be attributed to the drug itself, rather than suboptimal delivery, as demonstrated by the findings of potency problems associated with crushing, which range from 68 to 268% of the labeled dosage.10

• Patient safety. According to the FDA Center for Drug Evaluation and Research (CDER) guidance document, compounded products are not required to comply with current good manufacturing practice (CGMP).11 Because these compounded products are outside of the FDA’s jurisdiction by virtue of being non-FDA-approved, the FDA is often unaware of any problems with the medication unless a complaint, such as a report of a serious adverse event or contamination, is received.11 When the FDA is made aware of such issues, it conducts an investigation. As an example, the guidance describes an FDA investigation of “numerous serious adverse events associated with compounded drug products that were contaminated or otherwise compounded improperly, including the adverse events associated with the 2012 fungal meningitis outbreak in which contaminated injectable drug products resulted in more than 60 deaths and 753 cases of infection.”11 The number of deaths was subsequently increased to 64 in 2019.12

In 2018, FDA Commissioner Scott Gottlieb, M.D. issued a stern statement on the issue of compounding following the conviction of the pharmacist responsible for the aforementioned 2012 fungal meningitis outbreak: “A key aspect of the FDA’s mission is to ensure that drugs are made under high quality conditions so that no patient is at risk of harm due to poorly compounded products. In response to episodes where patients were harmed by poorly compounded drugs, Congress passed a new set of laws to improve the FDA’s oversight of these products. We’re committed to the efficient, timely and robust implementation of that framework to help make sure patients can trust the reliability and safety of compounded drugs, recognize the benefits of pharmacy compounding, and that we protect consumers from harm.”12 Additionally, the FDA has stated that if there is an FDA-approved drug that is medically appropriate for a patient, the FDA-approved product should be prescribed and used.13

• Healthcare provider safety. There are also safety concerns for healthcare providers to consider when crushing/compounding medications. In 2016, the National Institute for Occupational Safety and Health (NIOSH) provided a list of antineoplastic and other hazardous drugs in healthcare settings.14 This list is accompanied by safety precautions that should be followed when handling the listed drugs. As an example, spironolactone, an aldosterone antagonist used as a potassium-sparing diuretic available as a tablet for patients who suffer from: chronic HF, edema caused by heart or liver failure, and/or hypertension, and appears on the NIOSH list. According to NIOSH, crushing or compounding drugs like spironolactone tablets requires special safety protocols including the use of double chemotherapy gloves, protective gowns, a ventilated engineering control when compounding, and eye/face and respiratory protection if not crushed/compounded in a control device.14 Additionally, the U.S. Pharmacopeial Convention (USP) issued its Chapter 800 guidelines (USP <800>) on hazardous drug handling in healthcare settings in 2016.15 This guidance provides standards for safe handling of hazardous drugs to minimize the risk of exposure to healthcare personnel, patients, and the environment. It describes health care facility requirements for the handling of hazardous drugs, including 1) responsibilities of personnel handling hazardous drugs, 2) facility and engineering controls, 3) procedures for deactivating, decontaminating and cleaning, 4) spill control, and 5) documentation. The USP <800> guidance applies to all health care personnel who receive, prepare, administer, transport, or otherwise come in contact with hazardous drugs and all the environments in which they are handled.15

Regarding safety in drug handling in-hospital, more faculty members were familiar with NIOSH as an entity but not with the recommendations regarding safety measures, and few were aware of USP <800>. Faculty members also indicated that compliance with the precautions recommended by NIOSH and USP <800> may not be followed at their institutions. When discussing transition of care, the faculty expressed a lack of confidence in using crushed medications once patients are discharged for many of the aforementioned reasons and noted that incomplete dosing may result in costly readmissions. Additionally, patient compliance once discharged may be suboptimal, further complicating outcomes.

Alternatives to Crushing and Compounding
There was wide agreement amongst the faculty that if an FDA-approved liquid formulation of a prescribed medicine is available, it would be the preferred option for patients with dysphagia. In a discussion of the aforementioned spironolactone, the hospitalists, nurse, and pharmacist suggested that CaroSpir, an FDA approved liquid formulation of spironolactone, may be preferable to crushing/compounding spironolactone tablets, as it assists in maintaining compliance with USP <800> and helps maintain compliance with FDA guidance on avoiding compounding of existing approved products. Additionally, faculty members expressed confidence in the ability of a non-compounded liquid formulation to be delivered at the recommended dose, with commensurate efficacy, safety, potency, and bioavailability.

Conclusion
The transitioning of patients from the acute to post-acute care setting is an extremely critical time in patient care. This is especially important for patients suffering with dysphagia or requiring percutaneous endoscopic gastrostomy feedings. Understanding the increased risk to patients and staff when compounding/crushing medications has led the faculty to conclude that FDA-approved liquid alternatives are preferable. In summation, every effort should be made to continue patients on the safest and most efficacious medication when they are transitioned from the hospital setting in order to improve safety and outcomes.

14. Centers for Disease Control and Prevention

Today's Hospitalist is a bimonthly magazine that reports on practice management issues, quality improvement initiatives, and clinical updates for the growing field of hospital medicine. In addition to every article from the print issues, our website offers interactive features including blogs written by hospitalists, surveys asking hospitalists for their opinions on important issues, and the most comprehensive recruitment software listing jobs for hospitalists.
Contact us: editor@todayshospitalist.com
© Copyright 2016 - Today's Hospitalist
wpDiscuz