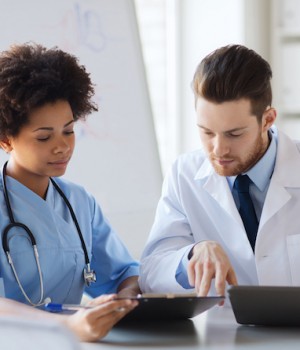 NOT KNOWING WHO TO CALL when a patient is deteriorating in the hospital or needs urgent tests conducted after discharge is not only a hassle for primary care physicians and hospitalists. Any delay in reaching the right contact, after all, may also threaten patient safety.

That’s why the hospitalist group at Northeast Hospital Corporation in Beverly, Mass., came up with an innovative solution that pairs hospitalists with individual primary care physicians or outpatient groups. Hospitalists are not only the point person for communicating with their assigned outpatient colleagues, but they care for these physicians’ patients in the hospital.

“Before,” he explains, “when a PCP wanted to talk to the hospitalist taking care of his patients, he might have had to talk to four or five docs until he tracked down the right one. Now it’s just one hospitalist.”

Likewise, hospitalists who needed information might have called as many as nine different outpatient doctors to track down who was covering a particular patient.

“Not knowing who to call really impeded communication,” Dr. Short notes, “especially when the patient was being admitted or discharged.”

The hospitalists at Northeast, who cover Beverly Hospital and Addison Gilbert Hospital in Gloucester, found that they didn’t need help addressing routine pending test results or standard discharge summaries. Those weren’t falling through the cracks, Dr. Short notes, because discharge dictations, which are transcribed within 24 hours, are “pushed” to referring physicians’ electronic medical records.

The group, however, was looking for a better way to transmit urgent information on patients who needed to be transferred to the ICU from the floor or had a post-discharge issue that needed immediate follow-up. To make such a system work, both the hospitalists and the community physicians had to agree on what constituted urgent vs. non-urgent communications “and how each type of information should be transmitted.

They decided that urgent matters warranted a phone call from the assigned hospitalist. Non-urgent matters, such as a need for a pulmonary consult two weeks after discharge, would be handled via the standardized discharge summary format.

Other guidelines worked out in advance determined which diagnoses qualify automatically for a direct admission, rather than being admitted through the ED. Direct admissions now include otherwise stable patients with UTIs or cellulitis, while patients with chest pain and hypotension have to first be seen by ED physicians.

Because the hospitalists work seven-on/seven-off, Dr. Short explains, each primary care physician is actually assigned two hospitalist contacts who alternate weeks. Dr. Short sends out an e-mail each week to the referring physicians, letting them know which hospitalist is on that week. For the most part, he adds, those designated relationships remain the same throughout the year.

Reduced LOS and costs
So far, according to Dr. Short, pairing inpatient and outpatient physicians is working out even better than hoped. Anecdotally, everyone seems satisfied that urgent information isn’t being lost in the transition. Primary care physicians are pleased that patients, if they have subsequent admissions, are seen by a hospitalist they’ve met before.

And “when the hospitalist sees the patient again, that makes the admission process easier,” Dr. Short points out. “Our doctor is familiar with the patient.”

Since the program was rolled out last summer, results indicate that average length of stay per DRG is down 0.3 days, while the average cost per case, DRG adjusted, is down $400. Another plus: Press Ganey patient satisfaction scores have improved between 3% and 5% since July, and the number of direct admissions of patients coming in straight from outpatient practices has jumped an impressive 30%.

“I actually think that’s because of the pairing,” Dr. Short observes. “The PCPs know who to call now.” Direct admissions free up time in the ED, he points out. And when referring physicians send patients to the hospital directly from their office, those doctors are able to identify the hospitalist by name who will be in charge of treatment.

Staffing and scheduling have been less complicated than expected. Dr. Short started by pulling retrospective data on numbers and types of admissions per primary care physician or group, and then formed pairs accordingly.

To address potential parity problems, the hospitalists understood that if one of them ended up being the contact doctor for eight patients at a time while another had 16, “they’d help each other out,” Dr. Short says. “If one hospitalist has 13 patients and another 14, it’s not a big deal.”

Preliminary concerns
Dr. Short admits that he and his group had some upfront concerns. Chief among them were how the innovative pairings would affect referring physicians and the workflow of both nurses and case managers.

Nurses were initially worried, for example, that they would have a hard time figuring out which hospitalist was treating which patient. But that potential confusion “hasn’t materialized,” Dr. Short says.

Case managers, on the other hand, wanted to make sure that the pairings didn’t disrupt the multidisciplinary meetings that all parties find invaluable. The fix, according to Dr. Short, was to move back the time of those multidisciplinary rounds by one hour.

There were also concerns that the new pairings might delay discharges because of a potential change in workflow. “We want to follow discharges prospectively to make sure that we haven’t fixed one problem only to create another,” Dr. Short says. So far, he adds, he’s noted no increase in discharge delays.

The primary care physicians and the hospitalists also needed some convincing, but for more personal reasons. Some local physicians had developed relationships with certain hospitalists and didn’t want to be assigned to doctors with whom they hadn’t worked.

What really ensured buy-in from all parties was the fact that the arrangement would benefit patient safety. “We did this taking a patient-centric approach,” says Dr. Short. “We didn’t come at this in terms of what’s best for the doctors, nurses or case managers, but what’s best for the patients. That’s something everyone can agree on.”