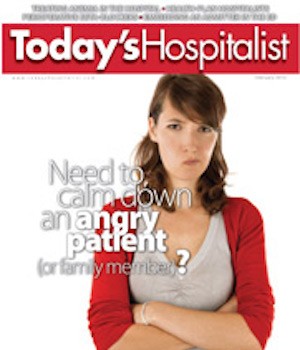 How do you bring up the topic of comfort care when family members insist they just want you to “make mom all better”? How do you calm down angry, frustrated patients, or approach patients who want you to “write the right thing in the chart” so they can stay longer in the hospital?

While hospitalists get plenty of clinical training, they often are thrown into situations with difficult patients – and don’t have a clue on how to proceed. At a role-playing session held during a hospital medicine conference last fall at the University of California, San Francisco, a panel of hospitalists staged several scenarios that they said crop up regularly in their practice.

“You may need to build up your psychological size to maintain authority.”

The goal of the session was to share techniques that hospitalists can use to defuse tough situations, while at the same time avoid caving in to inappropriate demands. Here’s a look at the scenarios presented and the talking points offered by the physicians who played the “hospitalist” in each encounter.

THE HOSPITALIST IS PAGED to see a 42-year-old patient with diabetes admitted two days ago with vomiting, cough and a questionable infiltrate. While he’s received supportive measures and insulin plus a pulmonary and infectious disease consult, the patient still has no definitive diagnosis.

The hospitalist has updated the patient daily on test results and explained that he “along with the subspecialists “agree that antibiotics aren’t indicated. When the hospitalist arrives at the patient’s room, the patient is dressed in street clothes, reading his chart and demanding to be transferred to another hospital “where they know what they’re doing.”

Case #2: The patient who doesn’t want to leave

AN 84-YEAR-OLD WOMAN was admitted yesterday to observation from the emergency department after falling at home. While she has extensive contusions and can’t walk, X-rays reveal no fracture. The hospitalist plans to discharge her today and recommend a nursing home for rehabilitation.The patient’s son, however, had been assured by the ED physician yesterday that his mother would be admitted for several days “and that Medicare would then pay for her stay in a nursing home. The son now understands that because his mother was admitted only to observation, Medicare won’t cover a nursing home stay. The son keeps hinting that the hospitalist should admit his mother instead of “taking away her Medicare benefit,” or at least keep her in observation another night so the family can make arrangements to care for her at home.

A 70-YEAR-OLD WOMAN with heart failure and advanced dementia is admitted to the hospital from her assisted-living facility with a UTI and probable sepsis, her third such hospitalization this year. The hospitalist on duty is now deciding whether to transfer her to the ICU or pursue less aggressive care.

The hospitalist “played by Steven Pantilat, MD, a UCSF hospitalist who’s an expert on palliative care “begins discussing the woman’s case with her son. The son keeps insisting that he wants the doctor to do everything he can to make his mother well again, although he admits that his mother has told him that she wouldn’t want to spend a significant amount of time “hooked up to machines.”

MR. BIG, A 57-YEAR-OLD EXECUTIVE who’s the CEO of the local bank and president of the chamber of commerce, has been admitted for sepsis. Although he’s a large donor to many local charities, he as yet has not donated to the hospital. His primary care physician is on vacation.

The hospitalist “played by UCSF hospitalist Arpana Vidyarthi, MD “introduces herself and explains her role to the patient. Soon, however, she also has to confront a cardiologist who Mr. Big has himself phoned for a consult, and who has gone ahead and ordered an echocardiogram. As Mr. Big continues to call in more specialists who are his golf buddies, the hospitalist has to go back to the patient to once again establish her pre-eminent role in his care.