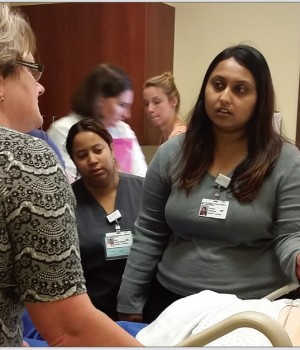 IT’S JULY, which means a new crop of first-year residents. At Rochester Regional Health in Rochester, N.Y., that also means it’s time for this year’s communications boot camp. Now in its third year, the boot camp brings 20 internal medicine interns together with new nurses and respiratory therapists, as well as nurse-practitioner and pharmacy students.

Over six weeks, the mixed group of 45 new trainees works through scenarios together at the Wegmans School of Nursing’s simulation lab at nearby St. John Fisher College. They spend one four-hour session for each two-week rotation—ambulatory care, acute care and critical care—after kicking off with a four-hour session on key communication concepts.

The boot camp was developed because “we started to see a disconnect in communication between new residents and nursing staff,” explains Virginia Riggall, DNP, the clinical nurse specialist within the health system who developed the program.

“As a society, we put a lot of stress on young doctors to be perfect.”

Why the disconnect? For one, many first-year residents are also new to the United States. More importantly, says Dr. Riggall, every type of health care professional “is raised academically within only that profession. Very few programs have team training in practice either.”

As a result, different professionals are thrown together in the hospital without a common language or method for communication, and without knowing each other’s scope of practice. Plus, new trainees “don’t know what they don’t know,” Dr. Riggall notes. “They don’t know how all these professions are supposed to fit together.”

That’s especially true for interns. “As a society, we put a lot of stress on young doctors to be perfect,” she says, “and they come from a highly competitive environment. They’re not aware that some things they say come across as defensive or cause conflict.”

One simulated scenario—pronouncing a patient—illustrates how a lack of awareness about each other’s role can create conflict.

“A nurse calls a resident to pronounce, but the resident feels no urgency because the patient is deceased,” says Dr. Riggall. “That resident doesn’t know the nurse can’t give family members any information about a patient until a doctor pronounces. Meanwhile, the family doesn’t understand why no one is talking to them.” Other simulations include handoffs, recognizing sepsis and managing respiratory distress.

The hospital invested about $20,000 to get the boot camp off the ground. And three years in, “our code data look much better,” Dr. Riggall points out. During one recent code, the resident running it assigned roles, “which is huge,” she adds. “The resident also stayed afterwards to talk with the nurses about what they all could have done a bit better. We’ve seen a great deal of improvement in team members’ communication skills.”