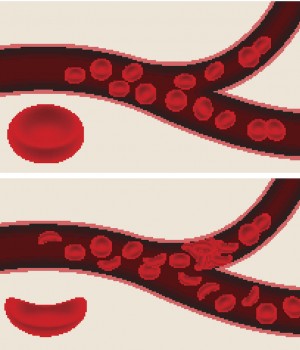 Published in the February 2012 issue of Today’s Hospitalist

When it comes to managing pain, one of the toughest groups for hospitalists to handle is patients with sickle cell disease. Not only do many of these patients have a staggeringly high tolerance for opioids, but the entire concept of treating sickle cell in adult patients is relatively new.

And while patients with sickle cell disease are now surviving into adulthood, the literature hasn’t kept pace, says Wally R. Smith, MD, director of the adult sickle cell program at Virginia Commonwealth University in Richmond. Dr. Smith, who wrote about that evidence gap last year in the Journal of Hospital Medicine (JHM), spoke with Today’s Hospitalist about managing pain in this group of patients.

What’s the biggest mistake hospitalists make when treating pain in sickle cell patients?The most frequent mistakes are underutilizing opioids and neglecting tolerance. Think about a chronic pain disease that starts at six months of age, then imagine a patient at 25 who has been off and on opioids for 24 years. That is not common even in low back pain patients or those with chronic pancreatitis. It is a much longer period to develop tolerance, and there’s a need for even higher doses.

What’s an example of high dosing?
Patients in chronic sickle cell pain will often be on long-acting opioids. They will be on 100 mg of methadone daily divided into three doses or on 80 mg of OxyContin a day, divided among two or three doses. They may also be on a short-acting medication such as morphine in doses like 60 mg every two to three hours. Those are just huge doses.

Why is there such little evidence on managing pain in these adult patients?
First, this is a new problem. Patients typically didn’t live long enough to be treated as adults, so advances in pain management for adult sickle cell haven’t kept up with cancer pain management, for instance.

Even in non-cancer pain, sickle cell hasn’t been studied like fibromyalgia, low back pain or even pelvic pain. The bright spot is that researchers in those fields are getting interested in sickle cell disease.

That’s because these chronic pain syndromes may have a common central or neuropathic pain mechanism for sustaining pain “and the kind of medications we need may not be opioids at all, but something like Lyrica, a centrally acting neuroactive agent. Amazingly, there have been few trials of these meds in chronic non-cancer pain.

We’ve previously thought about sickle cell pain as an ischemic phenomenon due to vasoocclusion, but that may not be the only mechanism at play. What we don’t know is whether there is chronic vasoocclusion so therefore chronic pain, or whether there is neuropathic pain going on all the time from prior acute vaso-occlusive episodes.

So the thinking now is that sickle cell pain is much more chronic, not episodic?
Our research was the first to show that pain in sickle cell disease may not only be episodic but also chronic, with episodic exacerbations. The idea that chronic pain may be the norm in sickle cell wasn’t even prevalent until five years ago.

What that means for hospitalists is that the notion that you can use opioids in the hospital to completely get rid of the pain may not be valid for as many as one-third of patients. This third of patients hurt when they’re in the hospital and when they’re not in the hospital, so the idea that they are in a crisis that you are going to abort is probably flawed. Instead, they are in a pain exacerbation from an existing chronic pain state, and you are trying to get them back to a place where they can go home.

Your JHM article mentioned too that sickle cell patients typically have a lot of conflict with physicians.
That’s due to a lack of trust on both sides. You have patients who don’t know the doctor and don’t know if they can trust him or her to treat symptoms, based on past mistreatment from other doctors. Then you have doctors who can’t measure pain objectively and are trying to figure out if patients are lying. Studies show that physicians have the misperception that as many as 50% of sickle cell patients are addicted.

Once patients figure out that you’re suspicious of their motives, it creates a vicious cycle of distrust. We recommend that you believe what patients say about their pain until you have objective evidence otherwise, like an inappropriate urine drug screen or a report of patients manipulating their PCA pumps. Most patients hate coming to the hospital. They do not want to be there “so if they are there, they are desperate.

During patients’ first day or two in the hospital, how often should physicians assess pain and titrate medications? Every one to two hours “and ideally, physicians should be doing that directly, not leaving pain assessment to nurses. You want to shorten patients’ length of stay, and if you’re not managing their pain past the level of their tolerance, you’re going to have a longer length of stay.

Even more important, you do not want to kill the patient. If you’re not there to see the effect of dosing changes, you will miss some early signs of an overdose. Unfortunately, doctors err on the side of undertreating and of not assessing pain and titrating medications often enough. So these patients are either in the hospital but still in pain, or sometimes overdosed.

How important is it for patients to have PCA pumps?
Not all hospitals have adopted PCA use outside the ICU. If you don’t have PCA available on the floor, then the nurse has to go and give every dose. So you’re going to have uneven coverage and the patient is going to be less satisfied. I’d say PCA use is really critical unless physicians are able to stay with patients, get a response every 15 to 30 minutes, and titrate up or down.

What’s the typical pain management regimen you use?
We have several. We have a hydromorphone PCA regimen that we individualize. Each patient has a customized regimen in the computer, ready to go when he or she shows up.

For new patients, we have one morphine template and one hydromorphone template. For less ill patients, we may use opioids only as needed with some kind of parenteral nonsteroidal, such as ketorolac. But that’s not a usual situation because those patients do not often get admitted.

What mistake do hospitalists make when discharging these patients?
Prescribing an opioid for too short of a time. Patients may get, for example, 20 Percocets and use them up within a day or two. So their pain is no longer controlled and they’re back in the emergency department.

You want to ensure that there is some follow-up scheduled for patients and give them the number of tablets they need to cover that longer period. Unfortunately, we have a real supply problem in terms of adult outpatient providers for sickle cell patients, and no one wants to care for them. So these patients fall through the cracks “and then they come back to the ED.