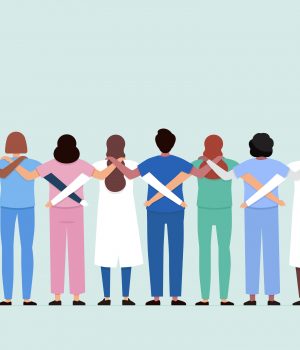 A PSYCHIATRIST in Minneapolis, Cristina Sophia Albott, MD, has long done research into stress and trauma. But early last year, Dr. Albott and some of her colleagues at the University of Minnesota Medical School and M Health Fairview—the health network associated with the University of Minnesota—began to share their concerns about clinicians working in what was becoming a global pandemic.

“My thought,” she says, “was that they ran a huge risk of developing stress and trauma-related syndromes.”

But what to do? While hospital wellness resources fill an important role, Dr. Albott and her colleagues felt the looming pandemic called for more comprehensive tools. To begin building a protocol, they started searching literature on strategies used during medical disaster relief efforts, such as those to combat Ebola.

Then a colleague who’s an anesthesiologist and a colonel in the military made this observation: As news of the pandemic spread, “he noticed that OR staff were more jumpy and nervous—just like soldiers in battlefield conditions,” Dr. Albott explains. “He told us that when the military is deployed, everyone has a ‘battle buddy’ who has your back. It’s a way to decentralize support and make sure everyone is connected.”

“It’s a mistake to think we can shoulder this alone, just on grit.” 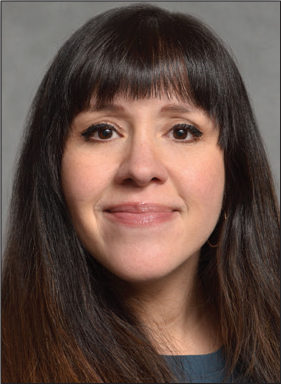 It was, she adds, “a brilliant insight, and that’s how the military piece came in.” Within two weeks, she and a handful of others had crafted the Minnesota Resilience Program (MinnRP for short) protocol that the health system began rolling out.

By last April, that protocol had been posted by Anesthesia & Analgesia. By mid-summer, Dr. Albott says, 3,000 health care workers—mainly doctors and nurses—throughout the system’s multiple hospitals had adopted it.

Different generational stressors
As described in the published protocol, the MinnRP initiative includes a buddy system designed to leave no one in patient care unconnected. The idea is that every worker in the system is assigned a buddy, a colleague on your unit who shares not only the same practice as you, but the same stresses.

The protocol points out, for instance, that clinicians of different ages face different types of stress. Older providers may want to protect younger colleagues from infection risk, even though they may be more vulnerable themselves. Younger providers can have a host of stressors around pregnancy and children, while those in mid-career may be caring for older parents and paying college tuitions. Those not in partnered relationships face their own stress risks.

Given those differences, according to the protocol, buddies shouldn’t be far apart in age, life experiences or seniority. They also shouldn’t be close friends. “You don’t want people so close that they can’t be objective,” Dr. Albott explains. “If someone isn’t doing well, their buddy needs to say, ‘I’m really concerned about you, and I think you should get in touch with a health consultant or wellness officer.’ Close friends may not do that.”

As set out in the protocol, clinicians would suggest two or three names of potential buddies; leaders in units or divisions would then actually assign buddy pairs. Ideally, those pairs would check in with each other two or three times a week, more if needed, to give each a chance to talk about what’s been stressful at work and in their family, and what’s working well.

The protocol also calls for another intervention: assigning a mental health consultant to each unit. Those professionals take part in unit meetings and are available for group sessions to discuss stress risk factors and how to manage them.

How it works in practice
That’s how the plan was laid out on paper. How it actually rolled out, says Dr. Albott, has been different.

For one, units and departments have taken up the initiative in different ways. Some, which didn’t adopt the buddy system idea very readily, already “work extremely closely together and are already checking in with one another,” she says, citing the pediatric emergency department as an example.

The protocol authors also learned that to get buy-in, the buddy system initiative “really needs to be infused from leadership and be part of the regular culture.”

The program also needed to be more flexible around the idea of assigning buddies instead of having people choose them themselves.

“It’s probably not the worst notion,” says Dr. Albott, “to pair up with someone you’re already close to.” The concern about buddies being “too close,” she adds, “hasn’t been borne out.”

The protocol authors also learned that the mental health consultants assigned across units were able to normalize conversations around stress and mental health. “We did go to units”—she was assigned to the ICU—”and give out our numbers so people could touch base if feeling stressed. But not many reached out.”

In practice, some buddy pairs check in with each other only once a month, while others are in “buddy groups” of three. Regardless of how they structure themselves, on units that adopted the initiative, everyone ended up with a buddy. ”

What seems to be most helpful is having someone checking in with you,” Dr. Albott says. “Being connected and able to talk about stress with one another is the secret sauce.”

Sustaining the program
According to Dr. Albott, Minnesota never experienced a covid surge like New York City’s. Instead, the pandemic has been “a wave dispersed over months and months.”

That’s changed the thinking about the initiative from “this singular thing we’re doing in this crisis,” she says, “to something more important: promoting resilience to stressors in general, across departments.” The program was in place, for instance, during George Floyd’s murder and the civil unrest that followed. In response, the mental health consultants in units held more impromptu group and listening sessions.

“That happened here in the Twin Cities, and it was incredibly difficult to live through,” says Dr. Albott. “We’ve realized that the long-term program benefit is that it represents a culture change around how we approach stress and difficulty and how we react emotionally to our jobs.”

The hope is that unit leaders, with the ongoing presence of the mental health consultants, will continue to talk about how to name and manage stress and to have that awareness trickle down. “Maybe,” Dr. Albott says, “there will be a slow normalization of physicians having emotional reactions to this incredibly difficult work we do. It’s a mistake to think we can shoulder this alone, just on grit.”

Initially, the protocol referred to the pairing system as “battle buddies.” But Dr. Albott points out that the name has since been changed to the “buddy” system to better reflect it becoming incorporated into regular unit culture. “We want it to continue and be standard in all departments,” she says. “We don’t want it just in battle times, but in quiet times as well.”

At the same time, she and her colleagues didn’t anticipate how isolating the pandemic would be with social distancing. And “we didn’t expect it to go on this long,” she says. “I didn’t realize this would become such a bigger, heavier burden.” Dr. Albott hopes that such ongoing peer support programs continue to protect health care workers from the burnout that could persist, even as the pandemic recedes.

AS DEVELOPED by the University of Minnesota Medical School and its health system in Minneapolis, the MinnRP (for Minnesota Resilience Program) buddy system is designed to make sure that everyone in direct patient care has someone checking in with him or her, even if only in brief phone or Zoom calls or texts. The encounters aren’t supposed to be devoted to airing complaints. Instead, the authors of the protocol the system is based on suggest the following questions to use in each encounter, as set out last year in Anesthesia & Analgesia:

Cristina Sophia Albott, MD, a psychiatrist with the medical school and health system who helped develop the initiative, points out that people at first were worried they wouldn’t know what to say to a buddy sharing a tough experience.

“We tell them to just go with, ‘Gosh, that really sounds difficult,’ ” says Dr. Albott. “It’s not about offering counseling but helping someone feel seen and heard.”