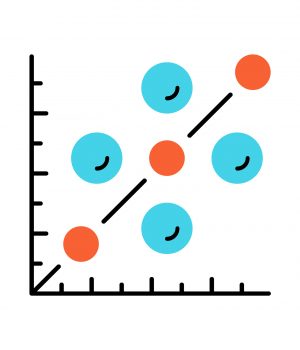 BACK IN JANUARY, I wrote a cautionary column about the various financial pressures squeezing hospitals (“Stress test on economic trends” ). I’m continuing the fiscal theme this month with a deeper look at payer mix.

Payment differential
Payer mix refers to the percentage of patients with government health plans — Medicare and Medicaid — vs. commercial or “private” insurance. As you recall, commercial insurance pays more for health care services than government plans do. Many hospitals depend on that differential to keep the lights on.

Erin Trish, PhD, and her colleagues in the September 2017 issue of JAMA Internal Medicine drilled down on physician reimbursement from a variety of payers. They analyzed 144 million insurance claims for a broad range of physician services.

Consider CPT 99232, the level 2 follow-up visit that is the workhorse of hospital medicine. Dr. Trish found that commercial plans paid 13% more for that code on average than traditional Medicare. The 2020 Medicare rate for 99232 is $73.62, so commercial plans are paying about $9.57 more per encounter. That difference seems relatively small—until you extrapolate it to your group for the entire year. It’s easily in the tens of thousands of dollars and maybe more.

Operating margin needs to be at least 2.5% for hospitals to sustain themselves.

But that’s small potatoes compared to knee replacements and CT head scans, where commercial insurers pay 28% and 99% more than Medicare on an inpatient basis. The 2020 Medicare rate for a total knee is $1,413.27 for the surgeon’s professional service fee (CPT 27447). The hospital also drops a second charge for everything else.

That “second charge” is the diagnosis related group (DRG), which trade association America’s Health Insurance Plans examined in a February 2016 study. Its analysis of more than 100 million claims found that commercial insurance paid more than Medicare for nearly every DRG looked at. The commercial rate was between 25% and 75% more than Medicare’s for more than half of all DRGs.

A brief aside on Medicaid: Payment is even less than Medicare. DRG payments in Minnesota come from an opaque formula and are hospital-specific.

Payer mix vs. operating margin
Operating margin is simply revenue minus operating expenses. Every business needs the former to exceed the latter to keep going. This is where payer mix is crucial. According to Christopher Kerns, executive director of The Advisory Board, a health care research group, operating margin needs to be at least 2.5% for hospitals to sustain themselves. Many hospitals are on the edge or well under that.

The Minnesota Department of Health maintains financial data on hospitals, and the following analysis is based on its most recent 2015-17 numbers. 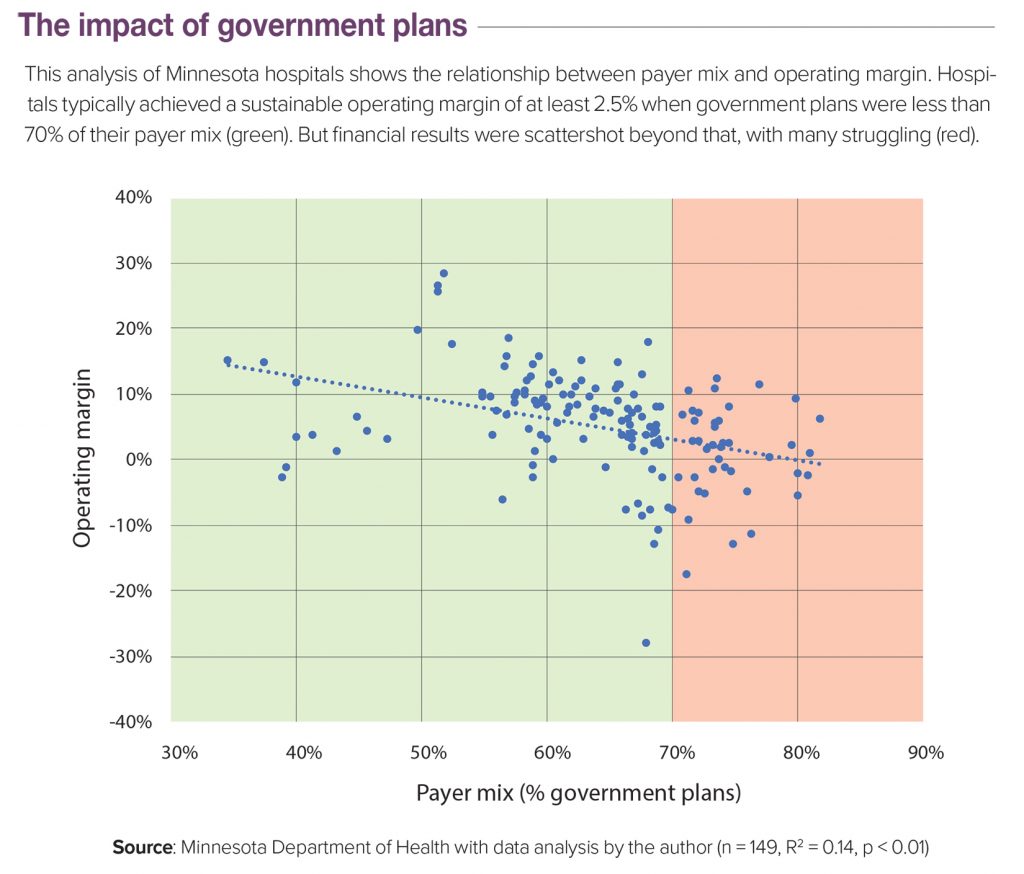 I zeroed in on about 50 hospitals subject to usual market forces. (I tossed out long-term acute care hospitals, specialty hospitals, critical access hospitals, and those owned/ operated by the state or federal government.)

Hospitals achieved an operating margin of at least 2.5% about 80% of the time when government plans were less than 70% of their payer mix. Beyond that, some hospitals did OK with a government-heavy mix, but most—63%—struggled to varying degrees.

As I pointed out in my January column: The percentage of hospital admissions covered by government plans has been steadily rising, hitting close to 63% in 2016. More baby boomers now receive coverage through Medicare, and Medicaid expansion is also a factor.

Padding the books
Hospitals generally have nonoperating revenue, including investment income and public funding; in 2017, a hospital in Virginia, Minn., turned a 2.6% operating loss into a 15.6% profit margin by booking more than $16 million from other revenue sources. But Wall Street and politicians are fickle and won’t come to the rescue every year.

In the meantime, study your payer mix and how it is changing. And pray for government insurance of less than 70%.

David A. Frenz, MD, is a private practice physician and health care consultant. Learn more about him and his work at www.davidfrenz.com or LinkedIn.

Excellent article! Question: Did Trish’s study have any data on census? In my experience ADC is another huge key to operating margin. It would be nice to factor that into the study.

Dr. David Frenz responds: Great to hear from you! Trish et al. (https://jamanetwork.com/journals/jamainternalmedicine/fullarticle/2643349) mined claims databases independent of other contextual factors such ADC. You bring up a great point. As you know, hospitals have various fixed costs. Higher census reduces many of those costs until you hit an inflexion point (it’s sort of a U-shaped curve), at which point higher volume becomes self-defeating. This is often hard for hospital board members to understand. They come from industries where volume is almost always good (restaurants, manufacturing) The relationship between census and margin would be a great stand-alone column. Thanks for the… Read more »

Not always true. I stopped doing rheumatology inpatient consults since private insurance pays much below medicare . Cigna pays crap – better to see the patient for free and not having to write the note at all.