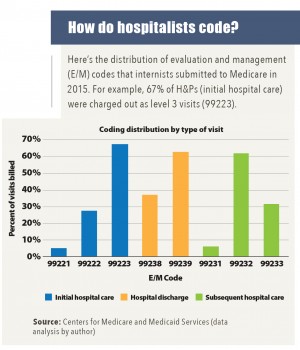 IT’S BUDGET SEASON, which means I’ve been nerding out on numbers—lots and lots of numbers. I’d like to explore some of them so you can better understand operational efficiency.

What’s that?! Operational efficiency refers to the ratio between business inputs and outputs. While there are various ways to look at this, the place where I generally start is provider compensation and productivity. What we pay providers is the input, and the clinical services that they deliver—as measured in work relative value units or wRVUs—is the output.

Inputs vs. outputs
Compensation and productivity should be reasonably congruent; otherwise, someone is potentially getting a raw deal. If salaries far eclipse wRVUs, your hospital is probably paying you too much and your program may not be financially sustainable. On the flip side, if productivity is outpacing compensation, your providers might be working too hard and they may be looking for better gigs elsewhere.
How closely should compensation and productivity match? In a white paper released in May 2016, Huron Consulting noted that its “leading practice for financial sustainability and affordability is no more than a 20 percent variance (positive or negative) in the respective percentiles for productivity and compensation.” In my opinion, this is a decent rule of thumb and allows for the inevitable vagaries in health care. 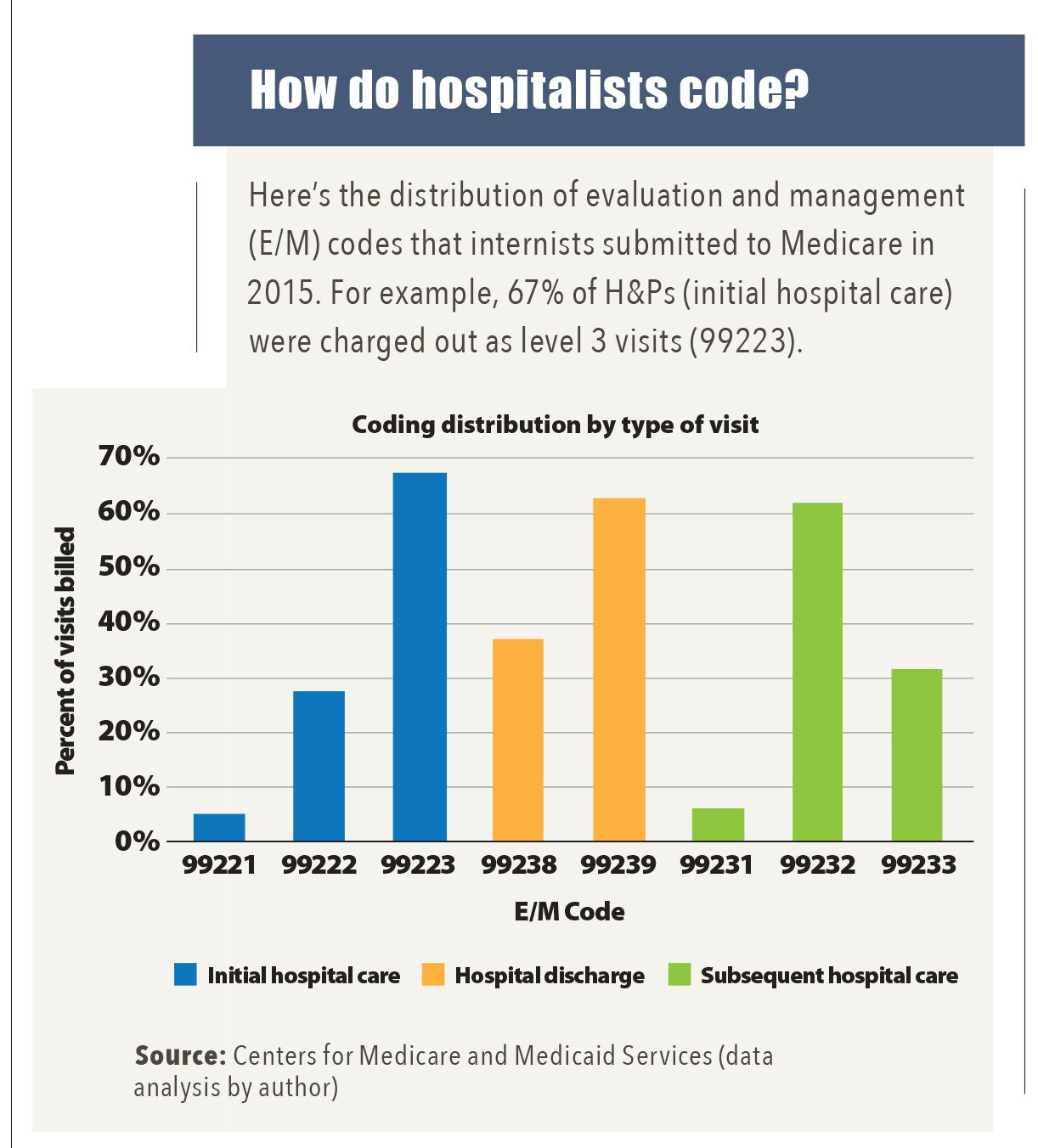 Benchmarks
Those percentiles refer to industry benchmarks like those published by the Medical Group Management Association. Per MGMA’s 2014 report based on 2013 data, median (50th percentile, P50) compensation and productivity for an internal medicine hospitalist was $254,000 and 4,298 wRVUs per year, respectively. (Key caveat: Compensation analysts generally “blend” multiple salary surveys and often “age” the data to reflect changes in cost of living between the survey year and today. Don’t get crazy about your paystub or duties until you have a really good handle on your actual plan design.)

If productivity is outpacing compensation, your providers may be looking for better gigs elsewhere.

Let’s assume that hospitalists in your group are salaried at P50. Using Huron’s 20% rule, individual productivity should fall between 3,428 and 5,158 wRVUs per year. Productivity lower than that begs for an explanation:

A positive variance, while ostensibly a good thing, risks a host of other problems and should prompt a similar search for root causes.

Deep weeds
wRVUs, for all their beauty, are pretty abstract. Hospitalists generally think in terms of census or encounters per shift. What does operational efficiency look like vis-a-vis those metrics?

The Centers for Medicare and Medicaid Services (CMS) publishes utilization reports by specialty. These serve as benchmarks for auditing providers who appear to be billing way too high or low.

Every specialty under the sun is represented in those reports except hospital medicine. So I snagged numbers for internal medicine because most inpatient evaluation and management (E/M) codes were probably submitted by hospitalists. 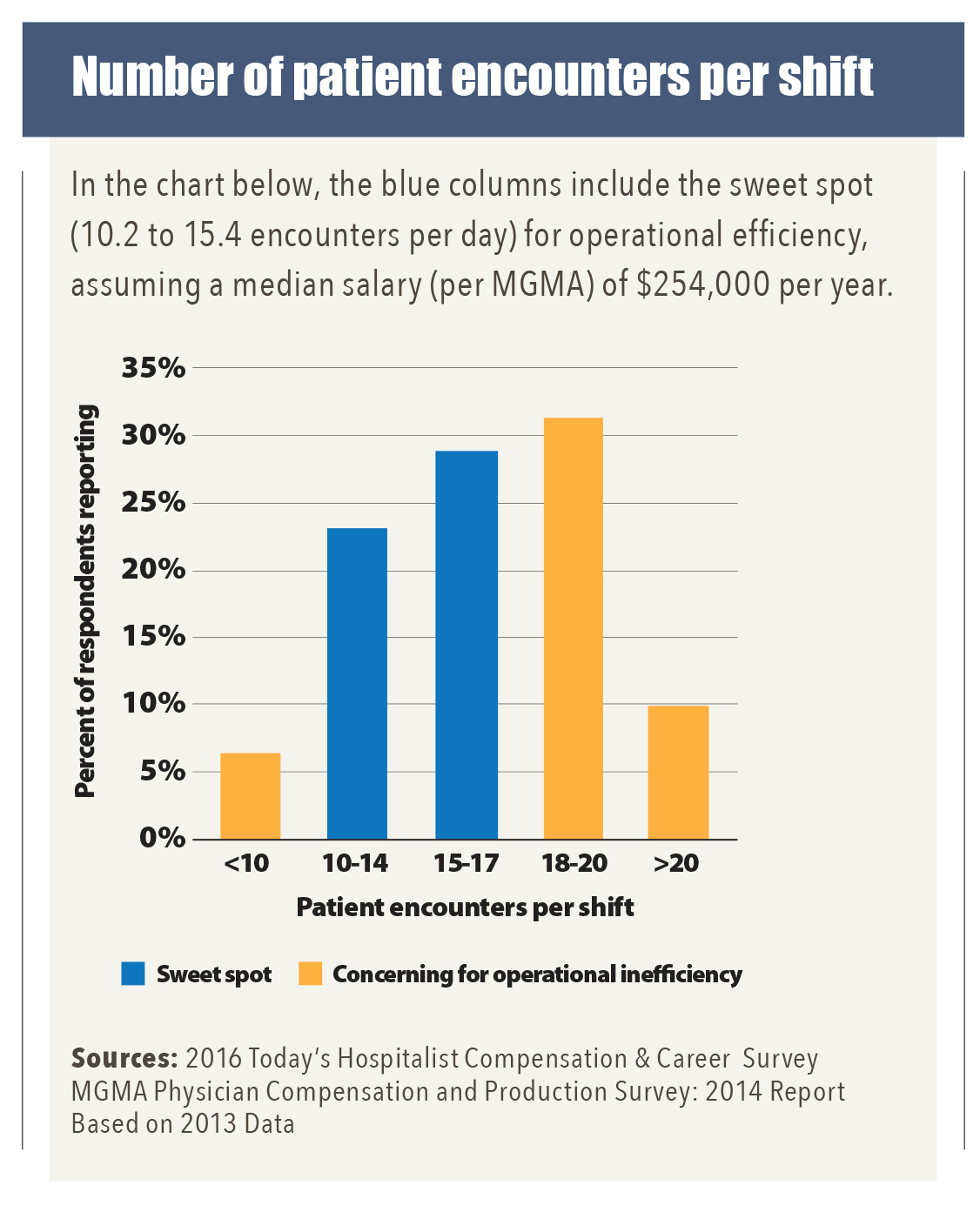 For my own calculations, I performed some mathematical hocus-pocus using wRVUs for each E/M code, assuming an overall coding distribution consistent with CMS benchmarks. I then mashed in MGMA productivity data and regressed the whole thing for a full-time hospitalist (seven-on/seven-off with 26 weeks of direct patient care per year).

Ta-da! P50 productivity translates into 12.8 patient encounters per shift, plus or minus 2.6 encounters when you include Huron’s 20% fudge factor.

Double check But does that number comport with reality? Data from the 2016 Today’s Hospitalist Career & Compensation Survey appear to give us a definite “yes.”

As demonstrated in “Number of patient encounters per shift,” about 52% of hospitalists report that their daily encounters fall into the sweet spot that I calculated. What’s more, the average salary in that survey was $280,000 per year, which lines up pretty well with the MGMA mean of $268,000 (don’t confuse median and mean).

This again confirms my general faith in the market.

And you?
Now it’s your turn. Is compensation in your group consistent with productivity? In what ways could you be more operationally efficient?

David A. Frenz, MD, is vice president and executive medical director for North Memorial Health Care in Robbinsdale, Minn. You can learn more about him and his work at www.davidfrenz.com or LinkedIn.