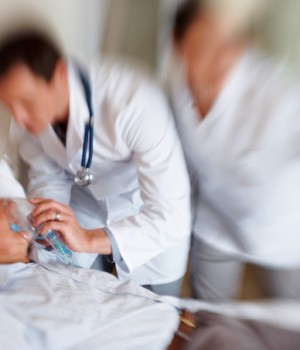 According to Gregg C. Fonarow, MD, professor of cardiovascular medicine and associate chief of the division of cardiology at University of California, Los Angeles, inpatient physicians bear some of the blame for the notorious bounceback rates that plague heart failure patients. The reason? “A lot of the time,” he said, “evidence-based recommendations are not being followed.”

Speaking at this spring’s Society of Hospital Medicine (SHM) meeting in Maryland, Dr. Fonarow noted that in prior studies, nearly one-quarter of eligible heart failure patients were discharged from the hospital without ACE inhibitors or ARBs. And about two-thirds went home without beta-blockers.

Once these heart failure patients reach the outpatient setting, Dr. Fonarow added, their care usually doesn’t improve. “When you look out 90 days following discharge,” he told the group during his presentation, “the treatment gaps that began in the hospital persist on an outpatient basis.”

While the figures seem dire, Dr. Fonarow said, the good news is that many of the rehospitalizations and deaths that occur in the heart failure population are potentially preventable. Data suggest, for example, that patients are frequently discharged with persistent symptoms and volume overload, and that they are often not fully evaluated or managed during their hospital stay.

“The hospital is a teachable moment,” Dr. Fonarow said. “We need to get evidence-based care started in the hospital.”

Scope of the problem
Heart failure accounts for one of Medicare’s largest expenditures. In addition to the one-out-of-four patients readmitted within 30 days, Dr. Fonarow said that half bounce back within six months. In-hospital mortality for heart failure patients is about 4.1%, and mean length of stay is 6.2 days.

But the even worse news is that every time heart failure patients come back to the hospital, their mortality risk increases. “Readmissions are not just an inconvenience and an added cost,” Dr. Fonarow said. “With each decompensation and subsequent hospitalization, there appears to be a higher mortality risk for this patient population.”

What can hospitalists do to prevent heart failure patients from bouncing back? Dr. Fonarow pointed to recommendations from the American College of Cardiology and the American Heart Association that call for these patients to receive ACE inhibitors or ARB drugs, and beta-blockers, and to have their left ventricular function assessed in the hospital.

A study published by Dr. Fonarow and his colleagues in the July 11, 2005, Archives of Internal Medicine found that LV function was assessed in only 86% of these hospitalized patients, and that ACE inhibitors were prescribed at discharge for appropriate patients with documented LV systolic dysfunction only 72% of time. While more recent data show improvement in these treatment rates, Dr. Fonarow also pointed to treatment gaps for other evidence-based, guideline-recommended therapies, such as aldosterone antagonists.

“A risk-treatment mismatch”
Variability is even greater when it comes to two key Joint Commission heart failure performance indicators: giving appropriate instructions for post-discharge care and providing smoking cessation counseling by the time patients are discharged. Results published in the same Archives of Internal Medicine study, for example, found that only 24% of patients received discharge instructions and only 43% received smoking cessation counseling.

“Does this matter?” Dr. Fonarow asked during his SHM presentation. “Yes. There is a great difference in hospital outcomes in terms of shorter lengths of stay and lower in-hospital mortality. These decrements in quality of care are translated to worse clinical outcomes for patients. And we see this similarly with 30- day readmissions.”

Another serious omission that occurs in hospitals, Dr. Fonarow explained, is that the sickest heart failure patients are the least likely to receive therapies that would help them most. Dr. Fonarow presented results of a study published in the Sept. 14, 2005, Journal of the American Medical Association, which showed that beta-blockers, ACE inhibitors and ARBs were most likely to be forgotten when patients were the sickest.

Start diuretics immediately
Because most patients admitted for heart failure will be congested (or “wet”), the obvious target for therapy is treating congestion. But Dr. Fonarow urged hospitalists to avoid using too many diuretics, pointing out that the drugs can worsen renal function and other comorbidities.

But one of the main causes of rehospitalization in heart failure patients, Dr. Fonarow said, is the failure to adequately address patients’ congestive symptoms before discharge. First-line therapy should be IV loop diuretics, and the agents should be “started immediately,” he said.

“The concept is not to let the patient sit for six to 12 hours or wait until they are up on the ward to administer this therapy,” Dr. Fonarow explained. “You can needlessly prolong patients remaining symptomatic and hospitalization by waiting.”

It doesn’t seem to matter, he added, if diuretics are given by continuous infusion or intermittent bolus. If the drugs aren’t adequately relieving congestion, he said, the first thing to do is to increase the dose and then add a second type of oral or IV diuretic, or switch to continuous infusion. If congestion remains, vasodilators appear safe to use in this population, as long as hypotension is watched for and they are used only for symptom resolution.

Dr. Fonarow also pointed out that evidence seems to be mounting that IV inotropic agents “should be avoided” if at all possible because they result in higher rates of adverse events, hypotension, acute myocardial infarction, A fib and mortality.

Continuing present therapies
During a heart failure hospitalization, it’s essential for most patients to continue taking the oral beta-blockers and ACE inhibitors or ARBs they were taking at home.

“You should not be withholding the beta-blockers or the ACE or ARB,” Dr. Fonarow said. “And further, once patients are stabilized, if they weren’t on them already, these medications are known to improve outcomes and should be initiated.” Patients should not be on both an ACE inhibitor and an ARB, however.

“Medication reconciliation is very critical for this population of patients,” he said.

The latest treatment guidelines for hospitalized acute heart failure patients also recommend that patients be transitioned from IV to oral diuretic therapy before discharge, and that they and their caregivers both be given “comprehensive written discharge instructions.”

Unfortunately, Dr. Fonarow said, there is no topnotch evidence to guide the decision about when is the best time to discharge a heart failure patient.

“We don’t have a lot of good evidence, just expert opinion,” he said. “You know they are ready to go and won’t be at excessively high risk for rehospitalization, compared to remaining in the hospital a few days longer.”

When to discharge?
The guidelines do state, however, that the following need to happen before discharge:

Other considerations, according to the guidelines, are whether patients have been stable on their oral regimens for 24 hours, have been off IV inotropes or vasodilators for 24 hours, are ambulating, and have been referred to a disease management program.

Disease management programs aimed at heart failure patients can make a difference, Dr. Fonarow said, noting that these programs have helped some hospitals reduce rehospitalization rates by 85%. The most effective programs, he said, optimize the medication regimen, get patients on a sodium-restricted diet and enroll them in a walking program or cardiac rehab.

“It is incredibly important for patients to receive comprehensive written instructions regarding the nature of the hospitalization and what follow-up care is necessary,” Dr. Fonarow said. “They should get a copy and their caregiver should get a copy. There also needs to be communication about the postdischarge care plan with all the caregivers who are going to be involved post-discharge.”

Problems with follow-up
Another clue to why heart failure patients bounce back so often: Relatively few see outpatient providers within a week of discharge. That’s despite evidence that heart failure patients who see an outpatient provider within seven days of discharge have a lower risk of 30-day readmissions, according to an article LINK TO http://jama.ama-assn.org/cgi/content/full/303/17/1716 in the May 5, 2010, Journal of the American Medical Association.

“After discharge, many patients remain symptomatic,” Dr. Fonarow said. “We know that a lot of patients aren’t adequately treated for their congestion, but there are also critical issues about safety,” such as monitoring potassium levels and making sure renal function isn’t harmed by diuretic doses that are too high. Not waiting for outpatient physicians to start or resume beta-blockers and ACE inhibitors or ARBs is also “a very effective strategy,” he said.

“There is no one single therapy that will solve the rehospitalization problem,” he said. “But we have great opportunities to improve and make an impact on these very high-risk patients.”

Heart failure: how to reduce readmissions