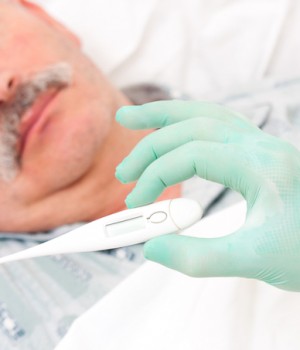 When it comes to detecting flu at most hospitals, rapid flu tests are still not the standard of care. But research released this year shows that these tests have the potential to help minimize the spread of nosocomial flu and reduce the unnecessary use of antibiotics.

That research, however, also shows just how far physicians have to go to incorporate test results into their management of patients with respiratory illnesses.

Even when those results indicated that patients had the flu, for example, relatively few physicians stopped antibiotics, even though many of those patients did not have pneumonia. And the number of patients found to have flu who received antiviral medications was far from 100%.

Still, physicians at the study hospital “Rochester General Hospital in Rochester, N.Y. “have now incorporated the lessons of their research into their practice: Once flu is documented in the community, rapid flu tests are performed on all admitted patients with respiratory illness who have been sick for less than a week.

Here’s a look at the research behind that strategy and at what researchers found about physicians’ attitudes toward test results.

Specific but not sensitive
One reality of rapid flu testing is that the procedure detects only about one-half of patients with influenza. When researchers at Rochester General examined 166 patients hospitalized over four winters who they eventually determined did have the flu, they found that rapid testing identified only 86 of those patients, or 51%.

According to Ann R. Falsey, MD, an infectious diseases specialist and lead author of a study in the Feb. 26, 2007, GET LINK Archives of Internal Medicine, the test’s lack of sensitivity isn’t a problem. That’s because it is very specific and yields few false positives. “It’s not a perfect test,” she explains, “but if 40% to 50% of patients are positive, you’ll know what you’re dealing with in those individuals.”

Dr. Falsey, who is associate professor of medicine at the University of Rochester, adds that a big concern about influenza in the hospital setting is airborne transmission. According to study results, 42% of the patients who tested positive were potentially infectious at admission and needed to be separated from the general patient population.

That raises another big benefit of these tests, points out Dr. Falsey, who is also an attending physician at Rochester General: Results give physicians useful clues about patients because recent illness is more likely to produce a positive result.

Because patients who test positive are likely to be infectious, she says, that makes them excellent candidates for isolation, even if it’s something as simple as giving them a private room. According to Dr. Falsey, having the guidance to know when to isolate flu patients makes the test worth the time and money.

Antibiotic use
Theoretically, patients who test positive may not need to continue on antibiotics. When researchers examined how physicians changed therapies after a positive test, however, they found mixed results.

While nearly every patient who tested negative for the flu received antibiotics, 86% of patients testing positive also continued to receive the drugs. That’s a problem, given concerns about antimicrobial resistance and iatrogenic problems like C. difficile. However, Dr. Falsey notes that physicians have some commonsense reasons for not stopping antibiotics.

Physicians often say they continue antibiotics because they suspect that patients have a secondary bacterial infection that helped bring them into the hospital. “There’s a sense that the problem can’t just be the virus,” she explains, “because that wouldn’t make the patient sick enough to wind up in the hospital.”

And Dr. Falsey admits that it’s hard to be 100% positive that patients don’t have a bacterial infection. “Frequently, they’ve had antibiotics from their PCP at home and they can’t cough up a good quality sputum for you,” she says. “For physicians, that’s a dilemma.”

The problem, she adds, is that most patients who tested positive for flu continued to receive two antibiotics, a combination that clearly targets pneumonia. “If you’re concerned about secondary bacterial infections, wouldn’t one drug be enough?”

Dr. Falsey says that while research shows that antivirals help reduce the duration of flu symptoms by one day in a healthy population and up to three days in sick, elderly populations, there are certain challenges to administering the drugs in the hospital.

For one, patients typically come into the hospital after battling their symptoms for a few days. In an ideal world, antivirals should be started within 48 hours of when symptoms appear.

And while data have shown that antivirals are effective in outpatients, researchers haven’t studied how the drugs affect inpatients. But Dr. Falsey is quick to add that there are reasons to be optimistic about the inpatient use of antivirals.

That’s because flu drives patients into the hospital more quickly than other respiratory viruses.

“A good starting point”
Dr. Falsey says her research highlights the fact that physicians need better tests to help them rule out the possibility of a secondary bacterial infection. The good news is that a new generation of biomarkers on the horizon “procalcitonin and CRP, to name two “may do just that.

Until then, physicians should continue to look for distinct clues when interpreting rapid flu test results. “If a patient has been sick for only two to three days,” Dr. Falsey explains, “that’s generally not enough time for a bacterial infection to intervene. If patients are positive on the rapid test, they probably just have the flu, particularly if they don’t have a high white blood cell count or lobar pneumonia.” Physicians can probably discontinue antibiotics, she says, in those patients.

And while the number of physicians who changed treatment may not be earth shattering, it’s something she feels researchers can build on.

“The effect on antibiotic reduction was fairly minimal, but it was a good starting point,” Dr. Falsey says. “If you give physicians a tool that tells them what their patients have, they’ll prescribe more appropriate therapy.”