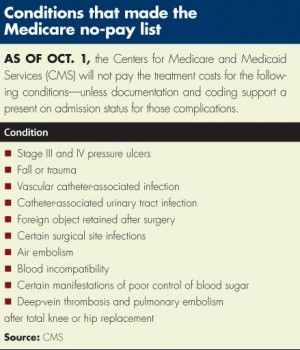 WHEN THE CENTERS FOR MEDICARE and Medicaid Services (CMS) announced that it intended to stop paying the costs of treating what it deemed to be preventable inpatient complications, it unleashed a firestorm of controversy. Critics charged that merely yanking back on the purse strings isn’t the right way to improve patient safety, particularly when some of those complications may not be preventable.

While that debate still rages, the rubber is about to meet the road. The CMS’ no-pay policy for inpatient conditions takes effect next month. That means that the stakes for correctly documenting which of those conditions are POA “present on admission “are about to get much higher.

Technically, physicians should have been documenting when most of those conditions were present on admission for the past year, as a way to report the incidence of these complications. (See “Conditions that made the Medicare no-pay list,” below.) But that reporting function will now translate into real dollars.

In fiscal year 2007, Medicare assigned more than $22 billion in higher DRG payments to treat those events. The CMS no longer intends to pay those funds unless physicians’ documentation and coding support a POA disposition.

While physician fees will not be affected, the payments that hospitals will receive for treating these conditions certainly will. And the CMS recently announced that three more conditions are being added to that list: certain clinical manifestations of poor glycemic control; deep-vein thrombosis or pulmonary embolism following total knee and hip replacement; and surgical site infections following certain elective procedures, including some orthopedic surgeries and bariatric surgery.

How can you be sure your coding and documentation support a present on admission status? Let’s take a look.

What is POA?
Present on admission is defined as a condition that is present at the time the order for inpatient admission occurs. That means that conditions that develop during any outpatient encounter “including in the emergency department or during observation or outpatient surgery “are considered to be present on admission.

As far as documentation, work with your hospital staff and coders to determine the best way to communicate POA information. One recommendation is for physicians to simply put “POA” in their notes next to their diagnosis. Be sure to make that notation for any of these conditions, whether or not they are the primary or secondary diagnosis.

Coding options
The CMS has designated the following five indicators that coders must use with ICD-9 codes when billing for POA conditions.

The importance of documentation
Clearly, the ability to use any of these indicators depends on how well you document. Only complete and accurate documentation will allow coders to select the appropriate indicator to use when billing Medicare.

Fortunately, coders will be able to consider all physician documentation relevant to an admission when choosing an indicator. The CMS has suggested that the discharging physician clearly indicate in the discharge summary which of the conditions were or were not present on admission. Again, simply documenting POA next to the diagnoses in question should make that clear.

At the same time, expect plenty of confusion. According to POA guidelines, it’s going to be up to physicians and hospitals “not up to Medicare “to resolve any documentation that may be inconsistent, missing, conflicting or unclear.

That means that physicians should plan on seeing quite a few notes sent back to them calling for more documentation or clarification. Hopefully, all that effort will eventually pay off with crystal-clear documentation and a safer hospitalization for patients. 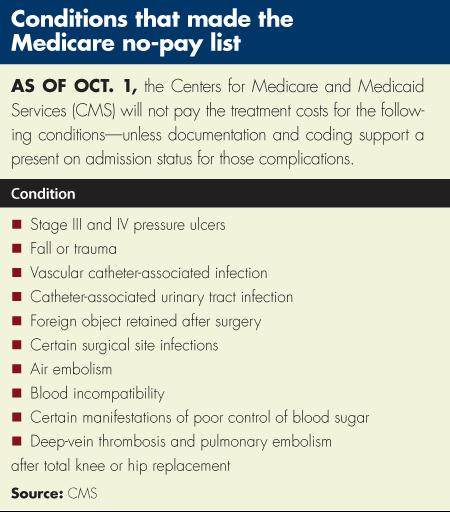 Kristy Welker is an independent medical coding consultant based San Diego. E-mail your documentation and coding questions to her at kristywelker@hotmail.com. We’ll try to answer your questions in a future issue of Today’s Hospitalist.