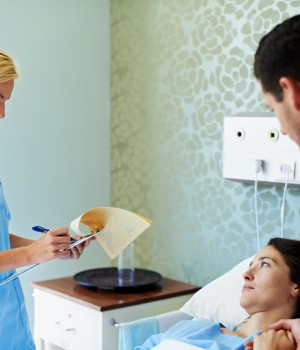 WHICH OF YOUR PATIENTS undergoing noncardiac surgery should have bridging anticoagulation? How long should you delay elective surgery for patients who’ve suffered a recent stroke or received a drug-eluting stent? And is there still a role for perioperative beta-blockers?

Those were the periop controversies raised in a presentation by hospitalist Hugo Quinny Cheng, MD, director of the medicine consultation service at the University of California, San Francisco (UCSF) Medical Center. Dr. Cheng was speaking at UCSF’s management of the hospitalized patient conference this fall.

The evidence around those controversies has been evolving rapidly, and the answers to those questions may now be very different than just a short time ago. “I’ve been talking about perioperative beta-blockers for a number of years,” Dr. Cheng pointed out. “This might be the last year that I do.”

“Stick a fork in them, I’m done with beta-blockers.”

Dr. Cheng presented this case: An orthopedic surgeon wants your advice about bridging anticoagulation for two patients getting hip replacements. One has A fib due to hypertension, while the other has a mechanical aortic valve. Do you order a heparin bridge for the A fib patient, the valve patient, both or neither?

Until this year, he explained, the only data doctors had to help them balance those risks came from retrospective studies. A meta-analysis published in the Sept. 25, 2012, issue of Circulation that looked at several retrospective studies found that “patients’ risk of thromboembolism didn’t change with bridging,” he noted. “About 1% of patients had an embolic event, whether you bridged them or not.”

But bridging increased bleeding risk five-fold. “About 11% of bridged patients had some kind of bleeding risk vs. 2% of those not bridged,” he noted. While those data suggested that bridging was not useful, bridging advocates “”which probably includes many of you in the audience” “could interpret those figures differently.

“You could say that these data indicate that bridging is very effective because these were not randomized trials,” Dr. Cheng said. “Bridged patients probably had a higher risk of stroke, so by bridging them, you brought their stroke risk down to the level of low-risk patients, who weren’t being bridged.”

Randomized data
Now, however, “we actually have some good data.” Published in the Aug. 27, 2015, issue of the New England Journal of Medicine, the BRIDGE trial looked at nearly 1,900 patients taking warfarin for A fib or atrial flutter.

Everyone in the study, Dr. Cheng explained, had a CHADS-2 score of at least 1, and patients were excluded if they had a mechanical value or a stroke within the previous 12 weeks, or if they were going for cardiac or neurologic surgery. Patients were randomized to bridging with either low-molecular weight heparin or placebo.

What researchers found confirmed the retrospective data, Dr. Cheng said. “There was no difference in stroke events, but bleeding did increase.” For major bleeds, the risk went from 1.3% in the unbridged arm to 3.2% in the bridged arm, and the number needed to harm was 53.

“Looking at minor bleeding,” he noted, “the number needed to harm was 12.”

There were, he added, a number of caveats. Most importantly, “the patients in this study had for the most part relatively low CHADS-2 scores,” Dr. Cheng pointed out. “The mean CHADS-2 score was 2.3, so that may not tell us what to do with patients at the high end of the risk spectrum.”

Bridging for mechanical valves
As for patients with mechanical valves, the BRIDGE trial specifically excluded them, and “the general perception of clinicians is that prosthetic valves carry a much higher risk of thromboembolism than A fib,” Dr. Cheng said.

But do data back up that conventional wisdom? There are no randomized trials, he noted, “but we can draw some comparisons between the A fib
and the mechanical valve populations.” A fib patients who are not anticoagulated run about a 5% risk per year of a stroke. Anticoagulation drops that risk to 2% or 3%. But patients’ risk changes, depending on their CHADS-2 scores.

As for patients with prosthetic valves, “the average patient does have higher risk than those with A fib, but it’s not five times higher,” Dr. Cheng explained. “It may be twice as high in varied situations.” And just like with A fib, “you can stratify risk more specifically, based on individual risk factors.” In the case of valves, risk goes up or down depending on the valve’s location and design.

In its 2012 guidelines, the American College of Chest Physicians endorsed just such a stratified approach for bridging anticoagulation in both A fib and mechanical valve patients. For those with valves, high risk would be any mitral valve or older valve design, or a valve patient who’d had a recent stroke. The guidelines didn’t make any recommendations for those at intermediate risk: A fib patients with a CHADS-2 score of 3 or 4, or patients who have a modern valve design and other stroke risk factors.

Bridging for previous DVT-PE
In his own practice, Dr. Cheng said he no longer considers bridging either low or intermediate-risk patients with A fib or a mechanical valve. But what about bridging patients who are taking warfarin not because of A fib but because of a previous DVT or PE?

“We’re back in the realm of retrospective data,” said Dr. Cheng. One recent retrospective study, published in the July 2015 issue of JAMA Internal Medicine, found no benefit to bridging for preventing recurrent DVT or PE. But “bleeding did increase “from 0.2% to 2.7%,” he noted. “The hazard ratio was 17, a very dramatic increase in bleeding.”

But the same caveats apply as with the retrospective data on A fib. “For the most part, patients in the study weren’t high-risk,” he pointed out. In his practice, he doesn’t bridge these patients, except those he does consider high risk: Patients who’ve suffered a VTE within the past three months or those with severe thrombophilia.

“I would consider bridging high-risk patients if the surgeon would approve it,” said Dr. Cheng, “or I’d consider placing a temporary IVC filter with all the warnings that go along with that, meaning: Get the darn thing out before too long.”

For patients at intermediate risk, whose VTE occurred between three and 12 months previously or those with recurrent VTE or VTE with cancer or other thrombophilia, “make your decision case by case. I tend not to bridge them.”

Delaying surgery
How long should you delay elective surgery after a person has an acute stroke? To answer that question, Dr. Cheng said, clinicians again have only retrospective trials to go by.

In one study published in the July 16, 2014, issue of the Journal of the American Medical Association (JAMA), researchers looked at the time between stroke and surgery for everyone in Denmark who underwent elective noncardiac surgery from 200511. Among that total cohort, 1.5% had had a previous stroke. Researchers examined data for 30-day incidence of major adverse cardiac events.

“They found a remarkably high incidence of cardiac complications within the first three months, which dropped quite a bit in the subsequent three to six months,” said Dr. Cheng. “Waiting beyond nine months didn’t offer a lot of benefit, and the biggest absolute decline occurred after three months. I would say to delay surgery for at least three months if at all possible and up to nine months for a completely elective surgery.”

And how does the timing of surgery affect patients with drug-eluting stents? A retrospective VA study published in the Oct. 9, 2013, issue of JAMA looked at more than 25,000 patients, all of whom had noncardiac surgery between six weeks and two years following placement of either a bare metal or drug-eluting stent.

For both stent types, “you see a fairly high risk of cardiac complications during the first 30 or 60 days,” said Dr. Cheng. “But by six months, those lines flatten out. That suggests that waiting one year is great “but maybe six months is good enough for most patients.” ACC/AHA guidelines issued in 2014 back that up, recommending delaying surgery if possible for 12 months after stent placement, but noting that six months may be OK if further delay may be harmful.

As for ACCP guidelines, said Dr. Cheng, they recommend waiting six months before surgery, but if patients need an operation within six months of having a stent placed, they should have perioperative dual antiplatelet therapy. In addition, guidelines note that newer drug-eluting stents are less thrombogenic, “so for those patients, six months might be correct. That’s where I think things are shifting.”

Periop beta-blockers
Due to safety concerns, doctors have cut back on perioperative beta-blockers. But many hospitalists still believe that beta-blockers may be indicated for some surgical populations, including those at very high cardiac risk or those who need an additional medication for hypertension anyway.

Studies published in the 1990s claimed that beta-blockers “had great benefit and very little risk,” said Dr. Cheng. “By the early 2000s, I and a bunch of other people were getting up in public, saying we weren’t beta-blocking our patients enough.”

But by 2005, he added, “everyone was taking a step backwards.” Retrospective studies began suggesting that the benefits of beta-blockers were much less dramatic and that some risk was real.

Then the POISE trial, published online by The Lancet in May 2008, found that patients given perioperative beta-blockers had fewer cardiac complications ” but increased mortality.

The DECREASE IV trial, published in the June 2009 issue of Annals of Surgery, again showed great benefit and low risk, but was revealed two years later to be fraudulent, Dr. Cheng pointed out. According to last year’s ACC/AHA guidelines, the only strong indication for perioperative beta-blockade is among patients already taking a beta-blocker for hypertension, angina or arrhythmia suppression.

“For everyone else,” he said, “the guidelines basically said, ‘We don’t know.’ ” The guidelines did mention thinking about starting a beta-blocker in patients at high clinical risk, defined as those with a revised cardiac risk index score of 3 or more. Other possible indications, according to the 2014 guidelines, include patients in whom you find ischemia on a preop stress test or patients with a compelling reason to be on beta-blockade anyway, such as those who need additional hypertension therapy.

“Researchers stratified patients by their number of four different cardiac risk factors: coronary disease, diabetes, a serum creatinine of less than 2 or surgery in a major body cavity,” Dr. Cheng explained. For patients with none of those factors “which would include patients with only hypertension ” “there was actually a net harm with beta-blockers as far as mortality.”

Patients at middle risk, with one or two risk factors, had no benefit and no harm. For those at high risk, with three or four risk factors, “there was a reduction in mortality among patients who got the beta-blockers.

“They found that treating high blood pressure with a beta-blocker increased perioperative cardiac complications, compared to treating hypertension with different agents,” Dr. Cheng said. “That supports what the previous study showed: If your patient doesn’t have a strong indication for a beta-blocker, such as actual cardiovascular disease, you have no good reason to start one for patients going to surgery.”

In his own practice? “Stick a fork in them, I’m done with beta-blockers,” Dr. Cheng announced. “I have not started a beta-blocker in a perioperative patient in probably more than a year.”