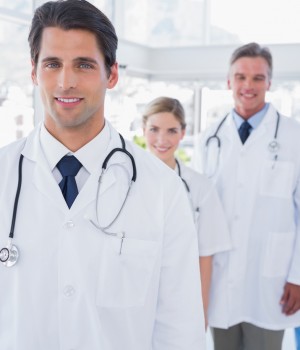 ASK DAVID GRACE, MD, about the advances hospitalists have made in gaining power and influence in the facilities where they work, and he tells the story of a hospitalist who came under fire from hospital administrators.

Dr. Grace, senior medical officer for The Schumacher Group, a physician staffing company based in Lafayette, La., recalls that the administrators were threatening to discipline the hospitalist. His infractions? His unwillingness to prescribe narcotics to active substance-abusing patients and his unremitting counsel of smokers with pulmonary diseases. When the largest primary group in town got wind of the situation, those physicians sent what Dr. Grace calls a “cease-and-desist letter,” explaining that the hospitalist had practice members’ full support “and that the hospital should immediately back off.

“The letter was sent to the hospital administration and copied to the board members,” Dr. Grace says. “That made this hospitalist untouchable.”

Why would primary care physicians come out in such strong support of a hospitalist? According to Dr. Grace, it’s an example of the growing respect “and power “that hospitalists now enjoy. And while that situation may be unusual, it’s a window into just how integral hospitalists have become in American medicine.

“That letter was based purely on the relationships that the hospitalist had formed with the primary care physicians by being a good partner,” Dr. Grace says. “It was amazing to see.”

For Dr. Grace, who has worked in hospital medicine for the last decade, that support is in stark contrast to the early days of the specialty. “That never,” he notes, “would have happened 10 years ago”.

Power from performance
When it comes to their influence in the hospital, there’s no doubt that hospitalists have seen a huge shift over the last decade.

“In the beginning, hospitalists were treated like glorified residents or house officers,” Dr. Grace says. “Today, we’re viewed as the keystone of a successfully-run hospital. We’ve come a tremendous way over the last decade and in doing so, we’ve developed a seat at the table.”

A big part of the specialty’s success comes from its sheer numbers. A decade ago, there were fewer than 10,000 practicing hospitalists. Today, there are an estimated 35,000-40,000 hospitalists, and in many hospitals they care for 80% of patients.

Dean Dalili, MD, vice president of medical affairs for Hospital Physician Partners, a national contract management company based in Hollywood, Fla., says the hospitalist workforce has attracted the attention of hospitals everywhere. “Whenever a small number of doctors cares for a very large number of patients, they become very influential,” he explains.

But numbers alone don’t explain the rise in influence that hospital medicine enjoys. An even bigger factor is the work hospitalists have done.

Time and time again, hospitalists have shown that they can reduce length of stay, use resources more efficiently, cover unassigned patients, comanage specialty patients, run quality improvement projects and roll out new IT systems, to name just a few. Moving ahead, the specialty is expected to play a key role in helping hospitals and health systems navigate the intricacies of health care reform.

Gaining leverage
Hospitalists’ power comes from other sources as well; consider hospitalists’ willingness to enter into comanagement arrangements, particularly for surgery patients. Comanagement is notoriously ill-defined and messy, but it frees up surgeons to perform the lucrative procedures that help strengthen hospitals’ bottom line. Hospitalists’ willingness to put their hospitals’ interests above their own has gone a long way toward earning the respect of hospital administrators.

And hospitalists have learned that they can build political power in more subtle ways. Think of the role that hospitalists play when they collaborate with other department heads for quality improvement, building bridges across various departments in their facilities.

“Hospitals are very siloed institutions,” Dr. Dalili says. “There’s very little coordination among departments, particularly in that middle management tier. The ability to make connections across each silo is the sweet spot for hospitalist medical directors trying to develop power and influence within an institution.”

Serving as the glue among various departments leads to other benefits, such as committee work. And groups are now parlaying hospitalists’ influence into the ultimate committee slot: serving on the medical executive committee.

In many hospitals where Hospital Physician Partners manages a team, Dr. Dalili says that the group has been able to create an independent hospital medicine department.

“In a community hospital, department structure is very meaningful because department chairs serve on the medical executive committee, the medical staff’s governing body,” he says.

It’s very hard to steer the agenda as one physician out of 300 on a medical staff and say, “Well, as one person, I’m going to have an impact,” Dr. Dalili points out. “But if you’re one of a dozen physicians on the medical executive committee, you have much more leverage and influence.”

Calling the shots
The road to respect hasn’t been easy. Hospitalists have earned their stature while working through some very real challenges.

The specialty, for example, has had to learn to overcome its relative youth. Young and sometimes inexperienced leaders have struggled with complicated issues and colleagues who have many more years on the job.

Hospitalists’ relative lack of experience among both rank-and-file physicians and program leaders probably won’t change in the near future. The need for hospitalists remains so strong that the specialty will likely continue to see an influx of young physicians for years to come.

Dr. Grace says that many young hospitalists spend their first few years learning how to transition from residency to practice. They don’t have much time or energy to spend on bigger picture issues.

But the good news is that in five to 10 years, a new generation of hospitalists will emerge that has the clinical and political savvy to take on leadership roles in medicine.

“We’re still at a disadvantage at the leadership level when dealing with other specialists or hospital administrations, but that will change over the next decade,” Dr. Grace says. “We’ll see a dramatic transformation and further strengthening of our specialty.”

But according to Dr. Dalili, the shift away from specialists calling all the shots has already happened “or at least, professional relationships have dramatically changed. Take, for instance, the fact that hospitalists now control specialists’ referral patterns.

“As reimbursement shrinks, specialists are very interested in maintaining their inpatient referrals,” he says, “and we now initiate those referrals, which generates a significant amount of business for them. At least from the standpoint of collegiality, people don’t look down on us anymore, and that shows that the power dynamic has shifted.”

The business case
For much of the last decade, hospitalists have worked hard to overcome another sore spot: the business case behind hospital medicine. Administrators bemoaned the “subsidies” that they had to give hospitalist programs, not understanding “or acknowledging “the fact that hospitalists produce much more in savings.

Julia Wright, MD, chief medical officer at Beaver Dam Community Hospital in Beaver Dam, Wis., recalls that in the very early years of her career, hospitalists had to make a strong business case for why hospitals should bring in a hospitalist program.

“Now it’s not an ‘if,’ it’s a ‘we need more and more from the hospitalists,’ ” she says. “The new rules of success in hospitals have created a tremendous need for hospitalists.”

Dr. Dalili cites the example of the 12-physician program in Florida where he works clinically.

“We manage more than 5,000 patients a year,” he explains. “We lowered our average length of stay by 1.4 days, saving the hospital 7,000 avoidable patient days.” Estimates of the cost-savings for each avoidable hospital day, he adds, run between $500 and $1,000. “That’s several million dollars in savings each year,” he points out.

“When added to the value-based purchasing bonus, the CPOE meaningful-use bonus and the avoided readmission penalties, the economic benefit of our program is tremendous.”

But while the business case is an easier sell in 2013 than it was in 2003, Dr. Grace says that not everyone gets it. “There will still be hospital administrators focusing their attention on the cardiologists and surgeons because these specialties generate revenue,” he explains.

“Let’s face it,” Dr. Grace continues, “hospitalists tend to not directly generate revenue. Our claim to fame is really in the cost-savings we offer. That may exceed the revenue that specialists generate, but there’s something sexy about generating money. There’s something not quite as sexy about saving money.”

But, Dr. Grace adds, that lopsided view favoring revenue over cost-savings may change as Medicare begins cutting reimbursement for hospitals that miss key quality goals, up to 7% over the next four years. “Given the thin operating margins of most hospitals,” he explains, “hospitals are going to survive “or not “based on their ability to mitigate that 7% figure. And that’s going to fall almost exclusively on the shoulders of hospitalists.”

Balancing work and burnout
But perhaps one of the biggest challenges that hospitalists have had to face as they’ve grown their presence in the hospital relates to patient volume and workloads.

Dr. Wright estimates that the duties of the average hospitalist have tripled in the last 10 years. “If you try to come up with a checklist of hospitalist duties, it’s very long,” she says. “The upside is that we have a tremendous amount of influence, but it’s a challenge to balance direct care with important needs like compliance, documentation and quality performance.”

Burnout has always been a threat to the specialty, and there are no signs that it’s going away anytime soon. “At the end of the day, our job is to care for patients,” Dr. Grace says. “Sometimes that consumes all of your time and energy, and there’s nothing left.”

But the reality is that if hospital medicine wants to maintain “or build upon “the power it has gained, hospitalists need to continue to prove their value. In today’s what-have-you-done-for-me-lately world, performance remains the key.

Fortunately, the last decade has put hospitalists on a great trajectory to do just that. “Has our specialty arrived at the promised land?” Dr. Dalili asks. “The answer is ‘not yet,’ but we have already shown that there’s enormous potential.”