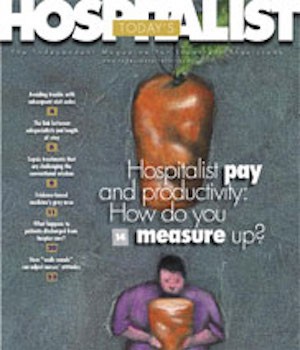 Published in the September 2004 issue of Today’s Hospitalist

The latest survey of hospitalists’ compensation and productivity shows that in hospital medicine, at least, that description remains accurate. Data from the Society of Hospital Medicine (SHM) show that hospitalist programs vary in how they’re operated and how they divide the revenue pie so much that it’s difficult to refer to any one model as prevailing. In other words, the survey paints a picture of an evolving specialty that is still very much in flux.

“There is much variation in employment models, how much hospitalists make, and the staffing models that groups are using,” says Joe Miller, a hospitalist consultant who led the survey. Perhaps even more important to hospitalists working in the trenches, the number of hours their peers work in patient care and the number of relative value units (RVUs) they generate also vary widely.

Despite that variation, the survey sheds light on several important trends. For one, the growth in hospitalist compensation appears to have stalled, at least temporarily. While physicians trying to recruit hospitalists say the competition is fierce, pay has not kept up with the growth seen in previous years.

To put the survey results in perspective, we talked to several veteran hospitalists about trends in hospitalist pay and productivity. Here’s a summary of the survey findings, and what those hospitalists make of the trends.

For the years 2003-2004, the median total compensation of all hospitalists came in at just over $156,000. That figure, which includes bonus pay, was reported by the 300 groups that responded to the survey. On average, those groups employed six physicians.

Factor in variables like practice type and geographic location into the average paycheck, and you find wide variation. Of all the factors affecting hospitalist compensation, analysts say, employment model is probably the most telling.

Stacy Goldsholl, MD, a longtime hospitalist and current chair of the SHM benchmarks committee, says she was disappointed that compensation appears to have stalled. “The 2002 SHM survey suggested an upward trend,” explains Dr. Goldsholl, who directs the hospital medicine program at Covenant Healthcare in Saginaw, Mich. “And if you look at those making the most money, they’re working the most hours.”

Both Drs. Goldsholl and Nelson acknowledge that the compensation data may be skewed by the growing number of academic hospitalist programs. When reimbursement figures are sorted by region, for example, hospitalists in the eastern part of the country show an average median total compensation of $145,000. The SHM analysis notes that pay in the East is likely lower because of the large number of academic groups.

When examining pay trends for hospitalists, there is a strong correlation between compensation and productivity. The SHM survey examined productivity by looking at two measures: hours worked and RVUs.

What about the highest-paid hospitalists, those individuals who work for large multistate groups? According to the SHM data, they spend an average of 2,400 hours a year in patient care, a number that’s well above average.

Cut the data another way, and you see that hospitalists whose pay is based solely on productivity earn big bucks, but they work 30 percent more hours than hospitalists who are paid a salary. This group of hospitalists also takes roughly three times as much call as their salaried colleagues.

Total charges also vary significantly by geographic region. In the eastern part of the country, where hospitalist salaries are among the lowest, gross charges are also the lowest. Hospitalists in the south, by comparison, justified their pay through above average charges, collections, encounters, admits and consults, and RVUs.

The differences in how hospitalist programs pay their physicians fall along predictable lines. In the academic setting, more than half of academic groups pay their hospitalists a salary only. At the other end of the spectrum, nearly one-fifth of multispecialty and local hospitalist groups pay based purely on productivity.

“My sense is that the groups that see more patients and make more visits and have higher RVUs are more likely to be paid in a way that connects their income to their production,” he explains. “Nothing in the survey proves that, but I think it’s probably the case. It supports the idea that having a productivity-based component to your salary can be good for maintaining productivity.”

Dr. Nelson cites what he says is a key piece of evidence to support that hypothesis: Hospitalists who are paid solely on the basis of productivity earned a median of $189,500, while salaried hospitalists’ median total compensation was $150,000. Average pay for hospitalists in mixed-model programs is $158,000.

The data also reveal an interesting fact about academic hospitalists: While they have lower median collections ($110,000 compared to $160,000), fewer patient encounters (1,600 compared to 2,259) and relatively low numbers of admissions and consults (371 compared to 468), they tend to generate roughly the same number of RVUs.

The SHM analysis hypothesizes that academic hospitalists are likely delivering more complex services. It also notes that the low collection rate can probably be explained by the payer mix in teaching hospitals.

The SHM data point to what may be an emerging trend in hospital medicine: Shift-based programs appear to be edging out call-based models, the type of programs that dominated in the early years of hospital medicine.

The numbers are still too close to call. Thirty-eight percent of programs use shift-based scheduling, while 36 percent use call models. The remainder use a combination of the two.

Steve Nahm, a vice president with The Camden Group in El Segundo, Calif., says the survey mirrors what he sees in his role as a consultant. “The survey results indicate to me that there’s no one model out there or even a predominant model,” he explains. “I see that as I’m working with hospitals to either set up new groups or to re-evaluate and potentially redesign their existing one.”

While analysts say growth in hospitalist salaries appears to have stalled, many employers still feel under the gun to compete with the growing number of hospitalist programs “and the generous salaries that some of these programs are offering. The high demand, low-supply nature of the market for hospitalists may be good news for physicians looking for work, but it’s causing headaches for many hospitalist programs.

InCompass Health, which employs 40 hospitals in 25 hospitals primarily in the Southeast, expects to double its physician base in the next six months. As a result, the company is adjusting both its compensation and benefits packages to compete for physicians.

“We don’t have the money to be the highest-paying program in the country,” Dr. Holloway explains, “and we’re having a hard time competing with hospitals that are setting up their own programs. They have deeper pockets than we do. We’re having to get creative, because my limited economics training tells me that we’re operating in the law of supply and demand “too few hospitalists and too many jobs.”

The company is currently rolling out a salary-plus performance model that will pay a bonus mechanism on productivity and quality. Dr. Holloway hopes that program, combined with a new profit-sharing option, will help level the playing field.

Healthcare Partners in Los Angeles, which has one of the country’s oldest hospitalist programs, is similarly modifying its compensation structure. While the program has focused on clinical outcomes, it will soon add a productivity component to the mix.

The 2,000-physician multispecialty-model organization, which employs 80 full-time hospitalists, currently operates on an 80-percent prepaid care, or capitation, reimbursement structure. While hospitalists at Partners currently log 2,300 RVUs annually, the goal is bring that up between 10 and 15 percent.

Jeffrey Hay, MD, medical director of inpatient services for Healthcare Partners, says the goal is to increase productivity without compromising the “outcomes expectations and the cost-per-case benchmarks we’ve already met.”

Robert Bessler, MD, president of South Sound Inpatient Physicians in Tacoma, Wash., is experiencing similar recruiting challenges. As salaries in hospital-sponsored programs increase, he is finding ways to fine-tune his 3 1/2-year-old program. While South Sound is already a giant among hospitalist groups with 43 physicians, it is experiencing a major growth mode.

Dr. Bessler says his drawing card “his Pacific Northwest location ” helps a great deal because many young physicians want to relocate there. The scheduling structure “physicians work nine days in 21 “is also an enticement. And to sweeten the pot, South Sound offers a retirement package that features an above-market employer contribution.

Still, he sometimes has problems competing for physicians who know that in the southern part of the country, median salaries are in the $170,000 range. In Dr. Bessler’s mind, the decision comes down to a simple question: How much work are you doing for the pay you’re receiving?

Compare, for example, the 2,500 median annual inpatient hours logged by hospitalists in programs that pay based on productivity with the 2,184 hours that hospitalists work in models that mix salary and productivity, and you begin to get a sense of the answer to his above question.

“That’s the sort of thing that doesn’t always come out very clearly in a survey,” Dr. Bessler says. “We have a tremendous retirement program, but that isn’t going to come through in this kind of survey.”

When Stacy Goldsholl, MD, looks at the latest survey data from the Society of Hospital Medicine (SHM), she can’t help but think that hospital medicine is evolving in a manner that’s strikingly similar to emergency medicine.

“The trend I see, but one that no one is talking about and is a bit occult in the data, is that hospital medicine is very much evolving as emergency medicine did,” says Dr. Goldsholl, who directs the hospital medicine program at Covenant Healthcare in Saginaw, Mich.

When emergency medicine programs first started, many were call-based, but the focus on safety changed that. Today, most emergency departments have fully staffed 24-hour programs based on the shift model.

And while call-based models have been considered the predominant model in inpatient medicine, Dr. Goldsholl thinks the fact that 38 percent of programs are now shift-based suggests that things are changing. “It’s always been assumed that call-based is the predominant model because it’s perceived as being cheaper because you don’t pay for those night hours,” she says.

Why are more programs favoring shift coverage? Dr. Goldsholl thinks it’s the growing focus on safety, the same concern that drove many EDs to change their staffing model. “A significant number of hospitals are putting up the dollars to have a hospitalist in the house,” she explains. “Inpatients are just way too sick for the doctor to be at home answering the call at 2 a.m.”

“I think we soon will no longer have to worry about productivity or patient volume to justify our value,” she adds. “We’ll be there because of the safety issue.”