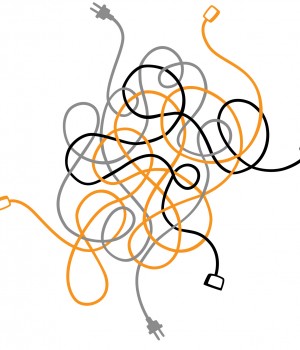 WHILE CLINICIANS complain about their infuriating hospital EHR, they might want to consider that some of their frustration may be self-inflicted. For instance, when writing daily notes, do you often copy and paste? Do you automatically click through an alert rather than reading the warning? Do you dread getting patient e-mails or ever write something in the note that you wouldn’t want a patient to see?

Speaking at the Society of Hospital Medicine’s annual conference this spring, Julie Hollberg, MD, a hospitalist and chief medical information officer at Atlanta’s Emory Healthcare, cautioned hospitalists to look at themselves and their own practices before blaming vendors and administrators entirely for IT gone wrong. After all, she said, can any physician imagine practicing high quality medicine today—let alone living modern life—without computers?

“What is the impact on cognitive thinking if you just hit control C and control V?”

“The technology is just a tool,” Dr. Hollberg said. “I want us to acknowledge that we, as authors, have 100% control over what goes into our notes. The technology doesn’t make us do anything.”

Copy and paste
Consider copy and paste. “Should we allow it?” Dr. Hollberg asked. How often do you complain that your colleagues’ daily progress notes are practically unusable, bloated with too much data and out-of-date details, while your own best friends when you draft notes are “copy” and “paste”?

“We all face the challenge of having to do more and more documentation, so why should we retype? Why not leverage copy and paste?” she asked. The answer is that the resulting “note bloat” decreases quality in several ways.

First, there’s the problem of missed information. When doctors have to sift through immaterial details to unearth the few relevant nuggets for that day’s care plan, it’s more than just an inconvenience: It’s possibly dangerous.

Then, there’s the problem that the patient’s story— the narrative at the heart of a patient’s H&P—risks being lost. And critical thinking central to a physician’s job happens during the writing process.

“Copy and paste, note bloat, and losing the narrative focus together decrease quality,” Dr. Hollberg said. “And what is the impact on cognitive thinking if you just hit control C and control V or tag and copy the previous assessment and plan? Are you really critically thinking about the events for that patient that day?”

She presented some evidence to back up those concerns. One study in the February 2013 issue of Critical Care Medicine found that residents copied and pasted less information than attendings (although both new and experienced physicians copied a lot), and that people were more likely to start a note from scratch after a day off service. According to Dr. Hollberg, that “speaks a little to the thought process that comes from actually writing your note de novo.” The theory, she said, “is that there is something about the writing activity that helps us synthesize our thoughts.”

Another negative consequence of copy and paste is its potential contribution to billing fraud and abuse. “The HHS and the attorney general have been clear about concerns that EHRs are enabling us to upcode our visits and add documentation in a way that is not meaningful,” she noted. Dr. Hollberg directed hospitalists to an article in the June 2009 issue of the American Journal of Medicine, which argued that such copy-and-paste “cons” outweigh the “pros” of efficiency and convenience.

“We all copy and paste because of efficiency, and until EHRs get better, we are not willing to give it up,” she said. “But I would encourage you to stop and think about whether you are doing your absolute best to make sure you don’t propagate outdated information.”

Can someone who is reading the chart tell what happened to the patient from yesterday to today based on your documentation? “Don’t say: ‘The computer put it in my note.’ The computer doesn’t put anything in your note.”

Alert fatigue
How many audience members, Dr. Hollberg asked, stop and actually read all the pop-up warning boxes vs. just click through them?

“If you are blowing through them, should we get rid of them entirely?” she asked. “And if you are hesitant to say we should get rid of them and you think they have some meaning, shouldn’t you stop and pay more attention to pop-up alerts?”

Yes, she pointed out, EHR vendors have a large part to play in solving the problem of too many inappropriate alerts. But hospitalists have a role too, whether it’s working on the committees that decide which alerts and other forms of clinical decision-support should exist or committing themselves to paying more attention to the alerts that survive such scrutiny.

Remember, said Dr. Hollberg, while clinicians disparage pop-ups, they are growing increasingly dependent on them. She recalled a recent example when she heard one clinician ask another for drug dosage information.

The answer was, “Don’t worry. If you get it wrong, the computer will pop up and tell you, and then that’s what you should give.”

Part of the problem is this: Many alerts would be welcome, if only they came at the right time and to the right person. One example of a good alert at the wrong time is a drug-drug interaction box that pops up when physicians are signing orders retroactively.

Good alerts sent to the wrong person include warnings that physicians ignore but that pharmacists would react to, if they’d receive them. Then there are the drug-drug interaction warnings about potential but minor consequences. Those would be better tolerated if they could be tiered based on severity, then batched and sent at a time when they wouldn’t interrupt workflow. Hospitalists should be working on all these ideas, Dr. Hollberg suggested, with their hospital IT departments and EHR vendors.

Until then, she said, “I would ask you to stop and  read some of those boxes. Even though the technology is not where we want it to be, more and more of  us don’t know the dose of all the different drugs. We  expect those orders to just be there.”

Patient portals and open notes
Hospitalists need to recognize that the day is coming— and, in some places, has already arrived—when patients will be able to read and react to physicians’ daily notes in real time. For hospitalists anxious about this evolution, “patients have the right to all their medical records at any point in time” already, said Dr. Hollberg. “This is about facilitating patient engagement and putting patients’ convenience over our anxiety.”

The debate over how much information should be available on patient portals and when it should be made available is further along in the ambulatory setting. But inpatient physicians are starting to be affected.

At Emory, for instance, Dr. Hollberg said that lab and radiology reports are now available on patient portals after seven days, and the discussion is underway to reduce that wait to three days. “The next thing is notes.” This adds urgency to the discussion about how to improve note content because patients will be able to read everything.

Outpatient studies show that patients who actively access information through portals better manage their chronic disease, are more likely to take their medications and come to follow-up appointments, and they perceive their communication with doctors more positively. Contrary to many physicians’ expectations, increased access to information including notes does not usually end up increasing the number of e-mails physicians receive or the amount of time doctors must spend either with patients during visits or addressing questions outside of visits.

“The fear is that this is going to cause more confusion or take a lot more time, but that hasn’t been the case yet,” Dr. Hollberg noted. “Many of us have anxieties about patient portals, but we are going to have the opportunity to use things like this to improve our patients’ engagement.” The hope, she added, “is that if you bring the patient into your care team, that may be one more step toward becoming a high-reliability organization.”

Unique issues
Dr. Hollberg acknowledged that inpatient physicians face some unique issues. Who should have access to an inpatient portal in addition to the patient, for example? Should lab results be posted to the portal at midnight when the patient’s doctor isn’t available to discuss them? And what about patients who don’t have access to technology or the know-how to use it? According to Dr. Hollberg, hospitalists as well as hospital IT administrators and vendors need to consider those issues.

Two recent articles described two small acute-care pilot projects that increased patient access to EHRs during hospitalization. One project, done at the University of Colorado and published in the May 2015 issue of JAMA Internal Medicine, gave patients tablets with an installed app they could use to access test results and medications. Neither doctors nor nurses felt the option resulted in more work. Patients appreciated having more control, although whether that access improved care was questionable.

Another project at Boston’s Brigham and Women’s Hospital and published in the Jan. 1, 2016, issue of the Journal of the American Informatics Association, gave patients or family members access to a tablet app that they could use to see goals, schedules, medications and problem lists, and to send non-urgent messages to the care team.

On average, patients sent 1.8 messages during the course of their hospitalization and largely addressed “health concerns, needs or preferences.” An example? “Is the fluid still in my lungs?” Another noted that a patient’s daughter would be at the hospital at 3, while the doctor replied directly that he would be there at 4:30.

“This small study shows that there wasn’t an abuse of messaging, and I am thinking that it is a lot more efficient for me,” Dr. Hollberg said. “Rather than having the nurse page me, with me having to return a call to the nurse to hear that the family wants a 3 o’clock meeting and then having to respond back to the patient’s family through the nurse, this is something to think about.”