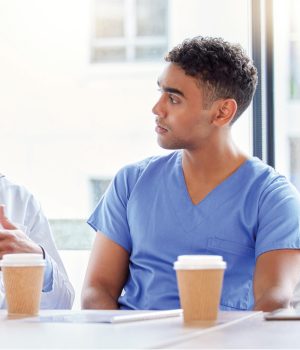 DID THE PANDEMIC take a toll on teamwork among health care workers or strengthen it? A study published this September in the Journal of Patient Safety offers a snapshot of covid’s impact on teamwork in health care—and on other measures like safety, leadership engagement and wellbeing—during the pandemic’s first year.

Lead author Kyle Rehder, MD, is a pediatric intensivist with Duke University in Durham, N.C., who also does research into quality, wellbeing and burnout. In the study, Dr. Rehder and his research colleagues compared two sets of survey responses from health care workers across three large U.S. health systems. The first survey was done in September 2019, while the second took place in September 2020.

Not surprisingly, teamwork scores across domains between the two surveys went down for many frontline health care workers—except physicians. That finding, Dr. Rehder and his co-authors suggest, may be consistent with what they call “a perception gap phenomenon.”

“Conflict is a teamwork killer if it isn’t managed well.” 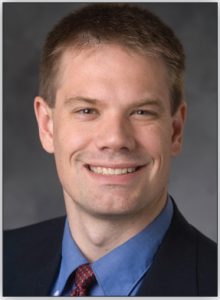 In teams with teamwork problems, they wrote, leaders like physicians can develop an “unrealistic and overly positive perception” of team culture that is at odds with what their staff really think.

Physicians are the outliers
The researchers analyzed survey responses from 50,000 health care workers in more than 70 health care facilities; while most of those facilities were inpatient, some outpatient clinics were included. Workers surveyed included administrative management and support staff, as well as a host of clinical roles ranging from physicians and nurses to pharmacists, nurse aides, social workers, technicians and technologists, therapists, medical assistants, and EMTs.

Both sets of survey data were “part of the standard surveying that the Joint Commission recommends for hospitals and other clinical settings to understand how well those sites are functioning and to assess their safety culture,” Dr. Rehder says. Given that the second survey took place after the pandemic hit, he and his colleagues decided to compare the two sets of results.

“Knowing the incredible stressors of the pandemic, we wanted to try to understand how the culture around teamwork helped workers cope,” he points out. The instrument used in both surveys—the SCORE survey—is similar to commonly used surveys from the AHRQ, “but SCORE also adds a resilience component and questions about burnout.”

Teamwork’s impact on safety
Dr. Rehder admits that the team’s suggestion that physicians’ teamwork assessment may be due to a perception gap contains some conjecture. The reality of a perception gap, however, is borne out by other research and by some of his team’s own previous studies.

“We do sometimes see a pattern of leaders disconnected from teams when teamwork is not strong,” he says. Given the shift that many health care teams made that first pandemic year from in-person interactions to more virtual ones, “that disconnect could grow.”

Dr. Rehder also notes that he and his co-authors are far from the first researchers to view patient safety as well as provider wellness through the lens of teamwork. What is unique about his team’s study is that it includes data collected at two very different times. “We can say that when teamwork was strong,” he explains, “other domains including safety climate and work-life balance were strong as well.”

What can boost teamwork
Dr. Rehder says he is eager to see results from surveys taken later in the pandemic to gauge how workers’ experience with teamwork and psychological safety evolved through successive covid waves. But other recent research did delve into clinician wellbeing and burnout later in the pandemic. Those data, he says, provide some clues.

“It you look across all specialties—not just physicians working the front lines in hospitals—many doctors ended up working fewer hours that first pandemic year and their wellbeing improved,” he says. But during the pandemic’s second year, those trends reversed. “The impact on physicians seemed to be delayed compared to other health care workers, including nurses, but burnout levels are higher now than they were prepandemic.”

In his teamwork study, three items demonstrated the strongest association with declines in teamwork: not being able to resolve conflicts appropriately, not being able to ask questions, and not being able to work together with different disciplines or backgrounds. “Supporting speaking up is a natural area to focus on, including how people respond to those who do speak up,” he says. “And conflict is a teamwork killer if it isn’t managed well.”

Dr. Rehder notes that several programs that offer proactive teamwork training focus on communication skills. One goal of many of these programs, he says, is to “flatten the hierarchy, because bad mistakes happen when folks are afraid to speak up.” That doesn’t, he adds, “diminish the need for clear and open leadership and strong people in leadership roles.”

As for a potential perception gap that physicians may have about how well (or not) the teams around them are functioning, “my guess is that where teams have been able to come together, you’ll see that gap shrink,” he says. “But where teamwork scores remain low, that gap has probably persisted. Certain aspects of the pandemic have improved, but a fair amount of recovery still needs to happen.”

Published in the November/December 2022 issue of Today’s Hospitalist