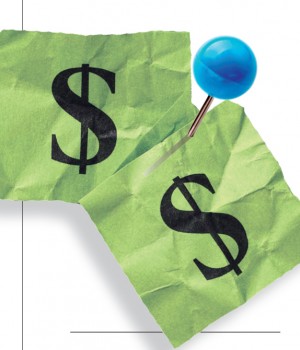 “DR. VASHIST, I’m sorry to bother you, but you really need to look at this medication that your patient is taking.” The hospital pharmacist handed over the patient’s medication list along with information on the costs and side effects of the offending medication.

The issue: a subcutaneous injectable form of calcitonin, Miacalcin, which costs about $11,300—a day. The patient had been admitted 11 days before for respiratory distress and also had primary hyperparathyroidism, which we had prescribed Miacalcin for early in her treatment. Several consultants including a pulmonologist, cardiologist, nephrologist and myself were involved in her care. I had “inherited” the patient (along with the exorbitantly-priced medication) from another hospitalist on day 5 of her hospital stay.

We started posting dollar signs—single, double, triple—in the EHR next to some expensive medications and lab tests.

When I took over her care, unsurprisingly, her medications completely escaped my attention. At the time, I felt satisfied that we had provided good care and that the patient was improving clinically. When the pharmacist stopped me in the hall, the patient had already racked up more than $110,000 in charges from that one medication alone. For those of us who deal with hypercalcemia, especially when it is not life-threatening, we know that we have several cheaper, equally efficacious alternatives.

Safeguards put in place
After I got over my sticker shock, I was able to sit down with other leaders in the hospital and come up with some potential safeguards. Subsequently, we have been able to implement several measures, none of which is fool-proof. But taken together, they have allowed us to keep similar situations to a minimum.

For one, we took a page from restaurant reviews and started posting dollar signs— single, double, triple—in the EHR next to some of the more expensive medications and lab tests.

More importantly, we began incorporating pharmacists into our multidisciplinary rounds. This ensures that we have vested stakeholders in those rounds to raise the issue of expensive medications and potential substitutes.

Not only does this act as an important check and balance, but it has helped bring about a key cultural shift. Because pharmacists are now integrated with the team, a lot of the hesitation they used to feel in approaching doctors—hospitalists and specialists alike—has evaporated.

It has also helped that we have started including pharmacists and other ancillary staff members in multiple quality improvement projects. The experience of working together has helped overcome some bad years of communication.

We have also removed a few rarely used but expensive medications altogether from our EHR order list, particularly the ones with cheaper substitutes that are just as effective. Physicians can still order those drugs, but they must now jump through several hoops, including calling the pharmacy. This creates an artificial “pause” that allows physicians to contemplate the need for that expensive medication and to consider cheaper, equally efficacious alternatives.

Those are some of the changes we have implemented in a few of our hospitals. In the past few months, we have also launched a major system-wide push to review our utilization practices. Part of that entails reducing unnecessary labs, imaging and antibiotics, as well as curbing the use of expensive medications that patients don’t really need.

Are we part of the problem?
Even with these new safeguards, as a practicing hospitalist and medical director, I cannot help but step back and think about the whole patient care experience. Hospitalists are now increasingly regarded as the “quarterbacks” of hospital care, the ones responsible for being the gatekeepers of value. Ideally, we are supposed to tie all the pieces of a patient’s care together and impose order on what can otherwise be a chaotic, perplexing and fragmented episode of care.

But as we try to cope with increasing inpatient volumes and chronic short-staffing, we are seeing significantly more patients every day. It has become more of a struggle to be the gatekeepers throughout the hospital and to ensure that all decisions are cost-conscious. This is a scenario being played across many hospitals in the country: We’re seeing sicker patients in a value-driven health care environment, and it is a struggle to manage costs, while still delivering top quality care.

It will be 20 years next month that Robert Wachter, MD, coined the term “hospitalist” in the Aug. 15, 1996, issue of the New England Journal of Medicine. While I’m fully aware of how far we have come as a field and how much we have accomplished, I have the feeling that patient care continues to become more fragmented—and that we, the hospitalists, as the torch-bearers in this changed health care landscape, could do better.

The only way to combat this fragmentation is to work collaboratively to deliver care as part of a team, and daily multidisciplinary rounds that include multiple stakeholders involved in a patient’s care is one good example. But as we now try to roll out such rounds to other hospitals in our system, I realize that the task is going to be anything but easy.

Working collaboratively in a horizontal rather than a “top down” team model, and breaking down the barriers to our having a real dialogue and flow of ideas: that’s what we’ll need if we are going to control costs, minimize waste and, most importantly, improve the quality of our care.

Amit Vashist, MD, MBA, CPE, is the system chair for Mountain States Health Alliance’s hospitalist division. He is a dual board-certified internist and psychiatrist.  A modified version of this commentary originally appeared as a blog on the Web site of Costs of Care, a nonprofit designed to help educate clinicians about health care costs.