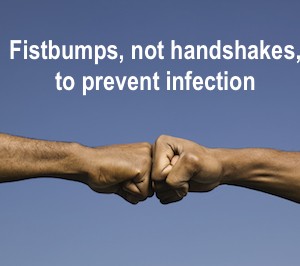 Published in the March 2014 issue of Today’s Hospitalist

AFTER TALKING WITH SOME COLLEAGUES about how to prevent the spread of hospital infections, W. Thomas McClellan, MD, had an idea that he just couldn’t shake: Rather than shaking hands, what if people in the hospital exchanged fistbumps instead?

Dr. McClellan, a plastic surgeon who practices in West Virginia, says that he initially viewed the idea of replacing handshakes with fistbumps as a tongue-in-cheek way to draw attention to the importance of hand hygiene in the hospital. But the idea resonated so much that he decided to launch a small study “footing the $400 bill for it himself “to see what he’d find.

The study, which was published in the December 2013 Journal of Hospital Infection, found that not only did fistbumps minimize contact time (lasting only .28 seconds vs. .75 seconds for handshakes), but fistbumps produced significantly less bacterial colonization. After shaking hands, subjects had four times more total colonization of their palms than their fists showed after bumps.

While the study was tiny “it compared cultured results when two health care workers first traded 20 handshakes around the hospital, then 20 fistbumps “the study went viral, with Dr. McClellan talking to media outlets that ranged from the “Today” show to GQ magazine. Everyone was enamored of the idea that there was a hip way to prevent the spread of nosocomial infections.

As a surgeon, the idea of curtailing transmission is near and dear to Dr. McClellan. He talked to Today’s Hospitalist about the attention his study received “and the implications for shutting down the spread of infections.

Where did the idea for the study come from?
It started as kind of a joke between a hospitalist, an ID doctor and myself as a way to raise awareness about hand hygiene. But the more I thought about it, the more it made sense. I kept asking myself, “Why do we shake hands in the hospital?” We’re told to wash our hands all the time, and we have technology like self-opening doors and automatic sinks so we don’t touch things and spread bacteria. But when we walk into a room, we shake hands not only with patients, but with every one of their family members. I thought replacing handshakes with fistbumps would be a pretty easy solution to study.

How have people reacted to the idea of fist bumping in the hospital?
Many people have been either dramatically against the idea, or they say, “Ah, I always knew we shouldn’t shake hands.” I find that younger people accept fistbumps more readily than older people, so there’s certainly a generational barrier. But I think everyone understands the purpose.

What do you think of the argument that handshakes are important?
I did a radio interview in Canada, and the woman who was interviewing me said, “You know, you can tell so much from a person’s handshake.” I think that some people in the business world put a lot into a handshake, and I understand that.

What did you hope the study would prove?
I hope the study makes us as doctors pause and say, “Our physical contact with patients is important, but so is handwashing.” The No. 1 thing I wanted to get out of this study was the point that it’s important to wash your hands. Studying fistbumps is a fun way to bring attention to that point.

People know that handwashing is important, and fistbumps can serve as a reminder. But it’s also important to encourage everyone to explore methods of interpersonal communication that reduce the transmission of infection, whether it’s a fistbump, elbow bumps or Japanese nodding. There’s got to be something better than shaking hands.

As a surgeon, are you more aware of the risks of nosocomial infections?
There are some really dangerous bugs in the hospital setting, and we’re starting to see transmission from room to room. As a surgeon, if I do a big free flap or a big reconstruction, I don’t let my patients stay in a room that’s next to someone with MRSA. Nurses will take care of a MRSA patient in one room, then go right next door to the next patient without putting on a gown or washing their hands. That concerns me.

Both physicians and hospitals need to start thinking about how to prevent this interpersonal transmission. Say you go into a room with a MRSA patient, and the patient’s whole family is there. You’re gowned and gloved with a mask, but they aren’t. They’re unprotected, they don’t scrub their hands “and then they go to the cafeteria.

What were some limitations of doing such a small study?
One thing we didn’t look at was virus transmission. In part, that’s because the N was too small. The two health care workers shook hands with, then fist bumped, only 20 people. So while we found that a handshake resulted in four times more bacteria on the hand, we didn’t look to see whether those bacteria were MRSA or VRE. That kind of analysis would require more money.

Do you plan to conduct any future research on fistbumps?
I’m in private practice, not academia, so I don’t publish much. The idea behind this study was to start a conversation about the ways we could reduce the spread of infection in the hospital. I would probably leave it up to somebody else with a bigger budget to take over from here, or at least partner with an infectious disease specialist.

Has the study changed how you or your colleagues approach patients?
The funny thing is that now everybody fist bumps in my hospital because they’ve heard about our study. Believe it or not, infection rates have gone down. I still shake hands, but much less frequently than I bump fists. Fistbumps might be a fad that will fade out, but I think I’ll keep doing it.

In the fight against raising infection in the hospital, consider the benefits of hand washing in addition to fist bumps. Read how Vanderbilt University Hospital almost doubled its hand-washing compliance rate while significantly reducing infection rates linked to insertion of catheters and tubes.