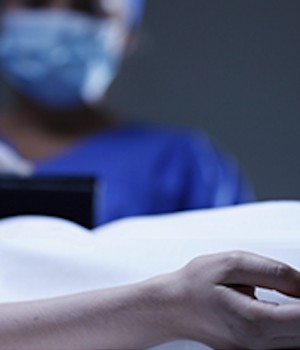 OPIOIDS HAVE BEEN TERRIBLE for our country, but great for me. I became hospitalist No. 3 for my old health system way back in 2005, joining two overworked internists who needed to offload the psych floors. One unit was a chemical dependency floor that was also a federally-licensed opioid treatment program—basically a methadone clinic in a hospital.

And so it began. Twelve years and board certification in addiction medicine later, opioids continue to pay our mortgage and fund orthodontia for our kids. I never saw it coming when I was applying to med school in the ’90s.

MME is a univariate analysis in a complex, multivariate world. When do you look at just a single vital sign and ignore the rest?

Hospitalists are certainly aware of—and probably fatigued by—the opioid epidemic: the 2016 CDC guideline, the surgeon general’s campaign, the Trump dust-up about whether or not it’s a public health emergency and so on. But the problem has always felt like it’s out there with the pill-happy primary care doctors and pain clinics. What, realistically, can a hospitalist do in two or three days for a seemingly incidental issue?

Problems with MME
I never minimize or soft-sell medication risks and side effects. I advise patients that medications are poisons because they interfere with the way the body normally works. Sometimes the risks are worth it, but I need patients to appreciate that potential benefits come with clear costs.

People have been buzzing about morphine milligram equivalents (a.k.a. morphine equivalent dose) since the CDC guideline appeared last year. Here’s the fifth recommendation in that document: “Clinicians should use caution when prescribing opioids at any dosage, should carefully reassess evidence of individual benefits and risks when increasing dosage to 50 morphine milligram equivalents (MME) or more per day, and should avoid increasing dosage to 90 MME or more per day or carefully justify a decision to titrate dosage to 90 MME or more per day.”

Everyone quickly became obsessed with those two numbers. Health systems sliced their data and started developing QI programs to taper patients below the higher MME threshold. Noble work, but it misses the larger point: There’s no risk-free dose.

This MME business didn’t come out of thin air. You can trace it back to large data sets that looked at MME vs. overdose. The one that I keep referring to was published in the Journal of Pain in April 2015. Investigators looked at 207,000 patients with non-cancer pain over three and a half years. Patients on 100 or more MME/day had a 6% risk of overdose.

But here’s the more interesting—and I think overlooked—finding: Those on 20–49 MME still had a 2% chance of overdose. Lower, yes, but probably unacceptable for a non-fatal condition like chronic pain where the benefits of opioids are extremely iffy.

Multivariate analyses
I’ve grown weary of MME for another reason: It distracts from other risk factors. MME is a univariate analysis in a complex, multivariate world. When do you ever look at just a single vital sign and ignore the rest?

Let me drive this point home with a simple case. Consider John Doe, a 55-year-old male admitted to your service for community-acquired pneumonia. He has mild COPD and takes oxycodone extended-release 20 mg/day for chronic back pain and fluoxetine for depression. What’s his risk of overdose in the next six months?

An above-average hospitalist (like you!) will note that oxycodone 20 mg=30 MME. (Yawn) Definitely seen worse. Continue at discharge.

The careful reader might guess that it’s 2% based on the prior section, but that’s not even close. Mr. Doe’s actual risk—brace yourself—is 30%. Said differently, one patient in three with his clinical profile will experience a serious overdose in the very near future.

This estimate comes from the risk index for overdose or serious opioid-induced respiratory depression (RIOSORD), an opioid-overdose calculator first presented at the American Academy of Pain Medicine’s 2015 Annual Meeting. (It was subsequently published this April in Pain Medicine.)

The investigators developed it by analyzing a crazy number of variables for 18.4 million patients. 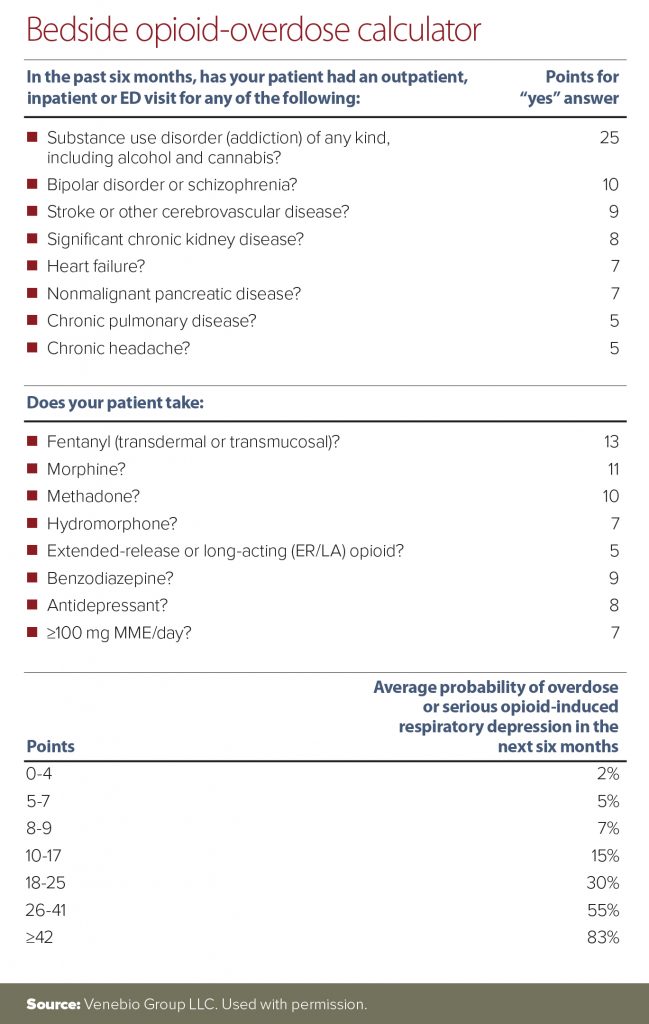 (Full disclosure: I work as a paid consultant for Venebio, the Virginia-based company that developed RIOSORD. Venebio has tasked me with writing content for frontline providers that will hopefully help them mitigate risk. I also use RIOSORD for direct patient care in my private practice.)

Despite his low MME, Mr. Doe racked up points for COPD, the extended-release formulation and his antidepressant. And here are some frightening twists: Substituting morphine extended-release for oxycodone increases his overdose risk to 55%. The same thing happens when you add a benzo for sleep. Yikes!

Scare them straight
So what can you do? Educate. Run your patients’ numbers and give them blunt, directive feedback. My suggested script goes something like this:

I also recommend putting a conspicuous but more doctorly version of this conversation in your discharge summary. Sure, you might get some angry phone calls from community providers. But what’s worse: an aching ear, or an overdose you might have prevented?

David A. Frenz, MD, runs a small private practice and health care consulting firm in Minneapolis. He was previously vice president and executive medical director for North Memorial Health in Robbinsdale, Minn. You can learn more about him and his work at www.davidfrenz.com or LinkedIn.