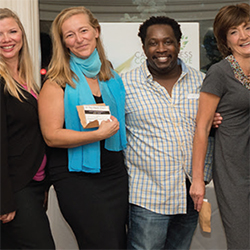 BRIGHT GOLD METALLIC LEATHER isn’t a typical look for Mary-Amanda O’Neill, MD, a hospitalist at Cape Cod Hospital in Hyannis, Mass. But that’s the dance costume Dr. O’Neill is donning this month for an excellent cause. She’s one of nine local physicians (and one of two hospitalists) who’ve spent months practicing, each with an expert partner, for this year’s Dancing with the Docs gala competition, being held Feb. 9.

Now in its third year, the program—which raised more than $200,000 last year—benefits the Cape Wellness Collaborative, a nonprofit that provides integrative therapies including massage, yoga and nutritional counseling to local cancer patients.

“I am,” Dr. O’Neill says, “100% up for embarrassing myself beyond belief for a good cause, no problem.” This year, the marquee event is being held at a local resort and conference center; last year’s program at a smaller venue sold out, leaving 400 people scooping up the tickets sold at the last minute for the dress rehearsal. Dr. O’Neill’s name was picked last March from a crowded field of local doctors who wanted to participate. She and her expert partner—JT Thompson, a DJ and emcee who also works at the hospital as an OR scrub tech—were chosen to compete in a new category this year: contemporary/hip hop.

“We first made a mix tape of all our favorite hip hop songs of the 1980s and 90s,” she says. While she won’t divulge the actual titles to which they’ll be dancing, she does say that Montell Jordan made the final cut. Sir Mix-a-lot did not.

Mr. Thompson has worked out their choreography, while dance instructors have choreographed the routines of some of the other couples who are representing dance styles ranging from West Coast swing to salsa and foxtrot. Dr. O’Neill and her partner have spent an hour or two practicing at least every other week since October.

She hopes they will take home the People’s Choice Award this year, one of several given out at the end of the competition. She’s studied the video of last year’s program and the routines of those who won.

What pleases the crowd? “The songs have a lot to do with it,” Dr. O’Neill explains. “Winners have fun songs that people know, and winning dancers tend to use the entire floor space. They also have a lot of poise, and they don’t use the same move twice.” And what do she and her colleagues get out of all this hard work? “Great joy, and the escape from needing to be perfect, which is otherwise demanded in almost every aspect of our lives,” she says. “The very act of dancing makes you happy.”

This year’s Dancing with the Docs competitors. Mary-Amanda O’Neill, MD, and her partner JT Thompson are in the middle. Credit: Organic Photography, Cape Cod

UPDATE: The results are in from the Dancing with the Docs Cape Cod competition held Saturday, Feb. 9, and congratulations to the night’s big winners: the hip hop duo Mary-Amanda O’Neill, MD, and her partner, JT Thompson. Another participating hospitalist was also honored as Karen Monaghan, MD, won the competition’s community hero award. Best wishes all around!

Will your Canadian relatives be able to see a video after the 9th?

A video of the whole performance is now up on the red Get the Live Stream link: https://www.capewellness.org/dwtd. According to Dr. O’Neill, “The charity does ask for a $25 donation, but as far as I know, it has worked in Canada, the UK and the Netherlands. Thanks and enjoy!” 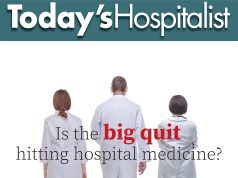