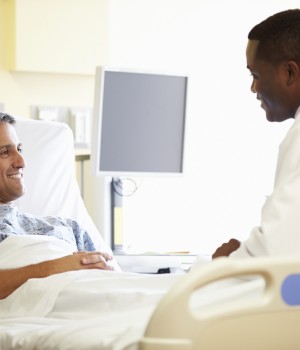 IF THERE’S ONE IDEA that administrators have latched onto to solve their throughput problems, it’s discharge before noon. Across the country, hospital administrations have set benchmarks for how many patients hospitalists need to discharge earlier in the day to help empty out the ED and free up available beds. Many hospitals have even put financial incentives on the table to boost hospitalists’ before-noon numbers.

But does discharge before noon actually improve patient flow? A study posted online in December by the Journal of Hospital Medicine suggests that the answer is “maybe not.”

“I suspect that we are unnecessarily keeping patients longer to satisfy administrative pressures.”

In the study, researchers from the University of California, San Francisco (UCSF) tracked the success of UCSF’s discharge-before-noon initiative from July 2012 through April 2015. They found that physicians were able to discharge about 17% of both medical and surgical patients before noon, just shy of the academic center’s target of 20%.

But the study also found that patients in that before-noon cohort had longer lengths of stay than patients not discharged before noon, by about 12 hours. That difference was particularly pronounced in patients admitted from the ED, compared to those undergoing elective hospitalizations.

Could those patients have been discharged the evening before, and were they kept longer in the hospital to count toward discharge-before-noon goals? The study authors stressed that the association they uncovered between longer length of stay and discharge before noon does not prove causation.

But lead author and hospitalist Alvin Rajkomar, MD, admits that he’s of two minds. “As a researcher, I must caution that the nature of this retrospective study prevents us from concluding that promoting discharge before noon causes an increased length of stay,” he says.

However, as a clinician working in the system, “I suspect that we are unnecessarily keeping patients longer to satisfy administrative pressures to discharge before noon.” Such initiatives, he points out, may serve as “a perverse incentive to prolong hospitalizations.”

Given the proliferation of discharge-before-noon initiatives, you’d think there would be a lot of data to back their effectiveness. But as Dr. Rajkomar points out, that’s not the case.

Two studies from New York’s NYU Langone Medical Center—one published in the April 2014 issue of the Journal of Hospital Medicine, the other in the October 2015 issue—did find that a discharge-before-noon initiative significantly reduced length of stay.

However, a former chief of medicine at NYU Langone penned a commentary about discharge before noon that was published in the May 2015 issue of The American Journal of Medicine. He noted that while the center was implementing that initiative, it had also put in place many other innovations to reduce length of stay, including a robust intervention to substantially increase medical and social services on the weekends. Further, he characterized the almost universal belief in the effectiveness of discharge-before-noon initiatives as an “urban legend.”

Another commentary, published online in March 2015 by Current Emergency and Hospital Medicine Reports, looked at studies about discharge-before-noon initiatives. It concluded that there has been “very little evidence to support that discharge before noon actually improves length of stay for the hospitalized patient, the key metric in measuring patient flow.”

In informal discussions with many colleagues, Dr. Rajkomar says, “no one is ever surprised that patients discharged before noon have longer lengths of stay,” nor do physicians refute the implied assumption that patients may be being held unnecessarily overnight.

When the UCSF initiative was launched, he says, the center—like many hospitals trying to hit discharge-before-noon targets—began holding interdisciplinary meetings in the late afternoon to see which patients could be teed up for discharge the next day.

At those meetings, says Dr. Rajkomar, “patients who we might have previously discharged in the evening were all of a sudden being rationalized as, ‘Why don’t we get credit for discharge before noon tomorrow?’ ”

The problem with evening discharges

Furthermore, says Dr. Rajkomar, it’s his clinical impression that patients themselves appreciate staying in the hospital an additional night, rather than being discharged in the evening.

While he’s quick to point out that his current study didn’t look at the impact that discharge-before-noon initiatives may have on patient satisfaction, he notes that “the entire system is somewhat stressed when you discharge patients in the evening.” Not only do patients often have problems arranging transportation after dark, but “some patients don’t like going home at 9 p.m.,” he says. “It just seems too abrupt to them.”

Plus, given how many unexpected obstacles can pop up around discharge, evening discharges often mean that doctors and residents have to stay past the end of their shift. The fact that patients may appreciate being discharged in the morning—even if they clinically could have been discharged the evening before—is another factor around discharge before noon that hasn’t been studied, Dr. Rajkomar adds.

Expected course vs. day by day

UCSF remains committed to its before-noon initiative. And for some patients, Dr. Rajkomar points out, trying to discharge them earlier in the day makes sense. As examples, he mentions patients with “protocalized admissions,” such as those coming into the hospital for chemotherapy, or those admitted for elective procedures.

“These patients have an expected hospital course, so you can plan for discharge without prolonging that discharge,” he explains. But his study suggests that it’s much harder to predict—or even manipulate—when patients admitted through the ED can be discharged.

“Their hospitalizations are a little more day by day,” he says. “The kind of day-by-day decision-making that you need to do with medical patients may explain their longer length of stay.”

In any event, as Dr. Rajkomar and his colleagues concluded, length of stay may be a flawed metric if it’s the sole measure used to gauge whether discharge-before-noon initiatives improve patient flow. At the very least, it should be combined with other measures such as ED wait times or how long it takes to transition patients out of ICUs and post-anesthesia units.

If discharge-before-noon initiatives aren’t having any impact on those types of metrics, he argues that hospitals may need to design projects to tackle those barriers to better throughput. But as hospitalists know, “it’s no simple task to understand the hospital system and patient flow,” says Dr. Rajkomar. “You can’t just flip a switch in one area and not have it affect other factors in the hospital.”