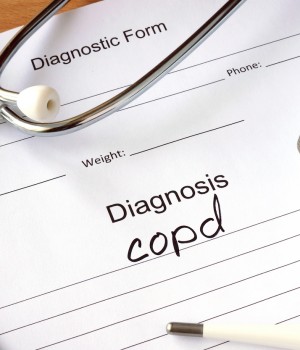 A SERIES OF STUDIES PUBLISHED THIS SPRING delivered perhaps the most detailed picture yet of how inpatient physicians are treating patients with acute exacerbations of chronic obstructive pulmonary disease (COPD) “and how those treatment choices affect outcomes.” While one study found the majority of doctors hewing to evidence when prescribing antibiotics, another reveals apparent disregard for guidelines in prescribing steroids.

The first study, a retrospective analysis in the May 26 Journal of the American Medical Association (JAMA), looked at whether patients with COPD receive antibiotics within the first two days of hospitalization. The authors found that 79% of patients treated in 2006-07 at hospitals that make up the Premier network did receive antibiotics within two days. That treatment was associated with lower inpatient mortality, less need for ventilators and fewer readmissions.

The second study, published in the May/June Journal of Hospital Medicine, looked at the antibiotics doctors select for COPD patients. Based on registry data, the authors found that macrolides and quinolones had the same rate of treatment failure, although patients given quinolones ran a higher risk of C. difficile.

But findings from a third study, published in the June 16 JAMA, were more provocative. While guidelines recommend low-dose oral steroids for COPD patients, an astonishing 92% were found to first receive high-dose IV steroids. Patients started on lower-dose PO prednisone had less need for ventilators, shorter lengths of stay and fewer costs.

All three studies were produced by investigators at the Center for Quality of Care Research at Baystate Medical Center in Springfield, Mass., headed by hospitalist Peter Lindenauer, MD, MSc. Well-known for his research using large databases, including one 2007 study that found only modest effects of financial incentives on quality improvement when combined with public reporting, Dr. Lindenauer spoke with Today’s Hospitalist.

Were you surprised that so few physicians were following guidelines on steroids?
Not especially. Our experience over many years suggested that virtually all patients hospitalized for COPD get started on IV steroids. In fact, I was surprised to discover a couple of years ago that the guidelines recommend lower oral doses.

Are the guidelines obscure, or do they have conflicting evidence?
No, the GOLD [Global Initiative for Chronic Obstructive Lung Disease] guidelines are the most widely referenced and have been updated regularly, including in 2009. While they acknowledge that there is less than perfect evidence regarding steroid route and dosing, they are pretty clear that 30 to 40 mg of daily oral prednisone is safe and effective.

We found that that statement was almost never being followed, at least in the first couple of days of hospitalization. The median total dose administered in the first two days for the high-dose group was 600 mg.

Why are the guidelines being ignored?
People may have been guided by a multicenter VA study in the late 90s, which conclusively demonstrated the benefits of steroids but used much higher doses.

But we also speculate that IV therapy may be used because it’s an indication for a hospital level of treatment. Or there may be less rational beliefs about the benefits of IV therapy compared to oral therapy and higher doses vs. lower doses.

At the same time, people are well aware of unnecessary intravenous therapy. Many hospitals are developing strategies to transition appropriate patients from IV to PO antibiotics for pneumonia, for instance. I think this may be similar.

What are risks from high-dose steroids?
In the short term, people worry about glycemic control, short-term psychiatric problems, hypertension and weight gain. Another problem is repeated exposure to high doses because patients with COPD are hospitalized regularly. Long-term risks can include immunosuppression and osteoporosis.

Given your research, do physicians at Baystate use low-dose oral steroids?
We don’t even measure it. We include oral steroids as a choice in our order set, but we’re no different from other hospitals: We have a hard enough time keeping up with publicly reported measures, throughput issues and Lean initiatives. There doesn’t tend to be enough capacity to study quality of care for conditions that aren’t publicly reported or part of pay for performance, unless it’s for research.

What registry did you use for these studies?
For both the antibiotic and the steroid analyses, we used Premier’s Perspective database, and the two populations were overlapping. About 85% of the patients included in the antibiotic study were also prescribed steroids.

A randomized trial comparing steroid doses head-to-head would be great, but we just don’t have the money to subject every clinical question to a randomized study. We need to develop more efficient mechanisms for answering questions, and observational studies of comparative effectiveness and treatment effectiveness with rich clinical registries are one way to do that.

In the not-too-distant future, we will have much more robust data sets derived from electronic medical records, and future observational studies can take advantage of them.

An editorial accompanying the steroid study raised the issue of developing core measures related to COPD.

COPD is a condition that has been largely overlooked by the quality measure development process, at least in terms of what’s publicly reported. Given that COPD is similar to pneumonia in terms of the magnitude of hospitalizations, readmissions and death, I think quality measures represent a tremendous opportunity.

Do you consider what you do to be comparative effectiveness research?
I think this is a prototypic example of comparative effectiveness research. It’s probably not what folks in Washington get excited about, because we weren’t comparing a $60,000 procedure to a $2 a month pill. But given that there are conservatively 500,000 patients hospitalized each year with COPD “and probably 20% more than that “the dollars not spent on IV steroids could add up.

Talk about the National Heart Lung and Blood Institute’s recent investment in comparative effectiveness research in COPD.
The NHLBI awarded our multicenter network, CONCERT [COPD Outcomes-based Network for Clinical Effectiveness & Research Translation], a grant to develop infrastructure to support that research. The group is made up of investigators from six academic centers, including Baystate.

We’re developing a registry that will combine administrative data with information obtained directly from the electronic medical records of our participating hospitals. The registry will have a lot of elements “vital signs, lab results, pulmonary function tests, plus data collected directly from roughly 1,200 patients.

These new data will enable us to examine questions that cannot be answered with administrative data alone. It’s a tremendous opportunity to move the field ahead.