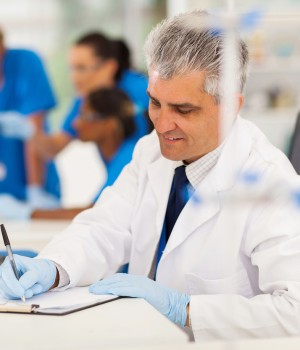 RAPID TESTING for Clostridium difficile using PCR-based assays has dramatically increased detection and helped with clinical management. But rapid testing comes with a major downside: The tests are so easy to order and so sensitive that they can’t discriminate between people with active C. diff infection (CDI) and those with C. diff colonization, which doesn’t need to be treated.

The resulting damage is considerable. Some patients are being overtreated with unnecessary antibiotics and isolation or contact precautions, while others are undertreated for the true, undiagnosed causes of their diarrhea. At the same time, hospitals are being publically shamed for high C. diff rates reported on CMS’s Hospital Compare Web site and hit with financial penalties for high health care-associated infection rates.

In fact, says Clare Rock, MD, an assistant professor of medicine and infectious diseases and an epidemiologist at Johns Hopkins Hospital in Baltimore, internal reviews by infection control experts at her hospital have found that as many as 30% of patients who test positive for C. diff actually have another cause for their diarrhea.

“People are not so much aware of how important it is to know when to test and when not to.”

As a result, she and a team of epidemiologists, antimicrobial stewardship experts, the microbiology laboratory utilization committee and hospitalists involved in promoting high-value care have been working this year to convince their colleagues to order fewer C. diff tests.

Although it’s still early in the rollout of the initiative, those efforts seem to be paying off. Compared to the first several months of 2015, clinicians in the first few months of 2016 ordered between 15% and 20% fewer C. diff PCR tests. That reduction was due to several interventions that have been thrown at the problem, from in-person and online education to pop-up alerts in the electronic health record.

Over the last decade, Dr. Rock explains, “We have done a good job educating clinicians about the importance of C. diff, and they are very aware of it.” However, “people are not so much aware of how important it is to know when to test and when not to.” While physicians certainly need to find patients with C. diff diarrhea or C. diff colitis and treat them appropriately, “we don’t want to treat people who have a C. diff positive test when they are having diarrhea because they were prescribed laxatives.”

Harnessing screen savers
Multiple studies have estimated that between 2% and 7% of the healthy population is colonized with C. diff. Rates are significantly higher—as great as 50% in some studies—among populations of hospitalized patients or residents of long-term care facilities. C. diff is the most common health care-associated pathogen in the U.S., and it is the cause of probably 5% or 10% of diarrhea suffered by hospitalized Americans.

One study published in the November 2015 issue of JAMA Internal Medicine found that PCR tests are so sensitive that a majority of patients with C. diff infection based on PCR tests actually have a different cause for their diarrhea and “did not need treatment for CDI.”

But most hospitals in the U.S. adopted PCR testing for C. diff within the last five to 10 years. The authors of that same JAMA Internal Medicine article pointed out that there has been a concomitant 50% to 100% surge in reported CDI rates.

As part of the Johns Hopkins’ awareness campaign, Dr. Rock says that one important component is the use of “screen savers” on computer terminals at rest throughout the hospital. The message on them—delivered using pictures of several of the hospital’s most prominent and respected physicians holding up red “Don’t Test” or green “Test” signs—is that clinicians should refrain from ordering C. diff testing if any one of these four conditions apply:

“There are many reasons why people in hospitals have diarrhea, and one big one is that people are prescribed laxatives,” Dr. Rock says. “Then an intern or resident sees a patient having diarrhea and thinks, ‘I need to send a C. diff test.’ ”

Instead, loose stool in the hospital is a common side effect of other medications and different diets, and sometimes patients have chronic diarrhea unrelated to any C. diff colonization.

Pop-ups, best practice advisories
The reasoning behind the recommendation against retesting, meanwhile, is that the PCR molecular tests are so sensitive that only “a very small amount of bacteria in the gut is going to give a positive test,” Dr. Rock points out. “Even after C. diff diarrhea has improved, you can still have a positive test, so the concept is: Don’t send a test for cure.”

In addition, “there is not that much known about this asymptomatic C. diff state and what it actually means,” she says. “We don’t know how long people keep it in their system, but we know it is common in people who are hospitalized.”

In addition to the Don’t Test/Test screen savers, the Johns Hopkins initiative also produced a “One Minute Guide” that contains the same message as the screen savers. But the guide spells out the evidence behind when not to test, and it is distributed throughout the hospital both electronically (via the medicine department’s blog) and in paper form.

A pop-up “best practice advisory” notification box with the same message also now appears when clinicians go to the EMR to order a C. diff test. With the health system changing EMRs this summer to Epic, that pop-up notification will eventually be tailored to the particular patient the test is being ordered for. As planned, the advisory will tell the physician filling out the order that the patient received a laxative within the last 48 hours, so please reconsider sending this C. diff test and call the micro lab with any questions or concerns.

“We will be able to capture the number of tests that would have proceeded until clinicians saw this advisory and decided not to order a C. diff test,” says Dr. Rock. The same sort of advisory will also pop up if the system perceives that an order is a repeat test.

In addition, because the five Johns Hopkins’ hospitals will be using the same EHR in the future, there will be the opportunity to build a “system-wide initiative,” not just one that’s in effect in the main academic hospital.

“With these kinds of initiatives and infection prevention bundles, it is difficult to say which specific intervention worked the best to reduce testing,” says Dr. Rock. But it looks like the education and pop-ups are raising awareness, and fewer tests are being ordered. “We can say the bundle as a whole worked.”