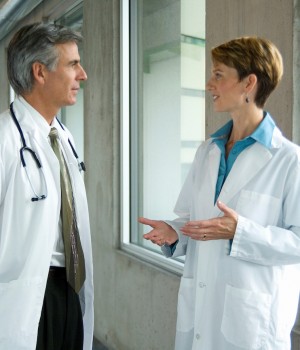 HOSPITALISTS just out of residency and working in their first practice may be apprehensive about practicing independently, without any guidance from more experienced physicians. And typically, they have no structured way to seek a senior colleague’s input.

The hospital medicine unit undertook the project because of concerns raised by both new and seasoned hospitalists. They worried that the transition to independent practice—along with increasing patient complexity and time constraints—were sometimes pushing new hospitalists out of their comfort zone.

“A big part of what this program did is recreate the community environment that says it’s OK to ask questions.”

That was of particular concern because, at the start of the pilot, 65% of the program’s 65 physicians had been in practice less than five years.

The program, which matched 12 coaches with 28 hospitalists, was a success. In a post-pilot survey, 92% of the early-career hospitalists said that having an advisor had been very useful, with 72% reporting that they felt more comfortable practicing independently after working with a coach.

In particular, 80% of the younger hospitalists credited those interactions with at least one change in their diagnostic approach. More than half (52%) said they were calling fewer subspecialty consults based on guidance they’d received.

As for their more senior colleagues, 90% reported satisfaction with their role as a coach, with 70% saying that it had made them more comfortable as clinical mentors.

“One thing that seems obvious now that we had not anticipated is the value of the clinical conversation and community around patient care,” says Christiana Iyasere, MD, MBA, a member of the department of medicine’s inpatient clinician educator resident teaching service who co-developed the pilot. “Early-career hospitalists found this valuable, I think, because working as a hospitalist can be isolating in comparison to the team-based work of residency. Instead of being with a team, doctors find themselves working in a silo.”

Structured interactions, drop-in sessions
In August 2013, the program began pairing coaches— formally called senior clinical advisors—with early-career hospitalists in 23 two-week blocks. The teams met daily, mostly after morning multidisciplinary rounds. As the pilot evolved, doctors also set up weekly lunch meetings where a senior hospitalist was available to take questions or talk about cases. Dr. Iyasere and her colleagues published a report on that pilot program in the February 2016 issue of Academic Medicine.

For the new hospitalists, having access to more experienced colleagues sometimes prompted a change in how they managed patients. But just as often, says Dr. Iyasere, the feedback validated what they were already doing.

“Even if the clinical advisor came in and said, ‘Yep, you’re on the right track. Looks good. I wouldn’t change anything’—that had incredible value for people,” she points out. “Other times, simply having the advisor say, ‘Why don’t you just wait 24 hours and see what happens?’ was helpful. That’s something you get only with experience.”

In one example, a collaborative exam changed management of a patient with presumed cellulitis who wasn’t responding to IV vancomycin. A coaching session helped detect a topical fungal infection, which was subsequently managed without a dermatology consult.

In another case, an early-career hospitalist managing a patient with pyelonephritis was about to pursue an extensive work-up because of the elevated liver-function test results. On review, the coach suggested considering transaminitis due to inflammation and waiting before proceeding with the costly workup. The patient’s lab values returned to normal two days later.

Alternative to CME?
In their report, Dr. Iyasere and her colleagues concluded that the pilot results point to a key problem with the physician apprentice model. After years of learning through direct interactions with experts, doctors right out of training are suddenly left on their own, even though the literature suggests that continued feedback is essential to acquiring therapeutic knowledge and improving diagnostic and procedural skills.

Continuing medical education is intended to provide just such opportunities. But according to Dr. Iyasere, CME’s variable quality and passive structure can result in suboptimal learning. Instead, she notes, the kind of coaching and interaction the Mass General program provided can help doctors acquire skills more effectively.

“A big part of what this program did—and what it could do—is recreate the community environment that says it’s OK to ask questions,” she says, “even as an attending.”

Identifying challenges
The coaching pilot did hit some hurdles along the way, some of which emerged even before the program was rolled out. For one, the developers struggled with how to define the coaches’ role. While it had to be supportive and non-punitive, it was not, strictly speaking, supervisory because both hospitalists in the equation were attendings.

“We had to make the front-line hospitalists comfortable that we were not evaluating them, but were there to help and further their clinical work,” Dr. Iyasere says. “That was a challenge initially.” Over time, all involved became comfortable with their respective roles.

And from a medical-legal standpoint, the “coach” role had to remain separate from the early-career hospitalists’ decision-making, care and treatment. “It’s figuring out where that line is crossed,” she says, “but also how much the coaches need to know about the patient to give reasonable advice.”

The other operational challenge was finding the time and financial resources to underwrite a non-revenue generating activity. The pilot was cost-neutral in that the coaches, all clinical educators, were able to assume their role as an advisor under their existing teaching time.

While Mass General isn’t continuing the formal program, it is developing a less structured early-career mentorship program to provide a similar level of feedback. That program is already up and running, although the clinician educator service is still working out the details.

Based on results, Dr. Iyasere is convinced that even a pared-down version of the program could help any hospitalist practice, academic or community.

“It’s doesn’t have to be all or nothing, and you could grow it over time,” she notes. For hospitalist programs interested in devising something similar, she recommends figuring out what early-career hospitalists need “and meet them where they are.” That might be a lunch once a week where people bring in their interesting or challenging cases, she says.

The point, she adds, is to provide a forum where young physicians can present their clinical dilemmas. “We can try to solve a problem together.”