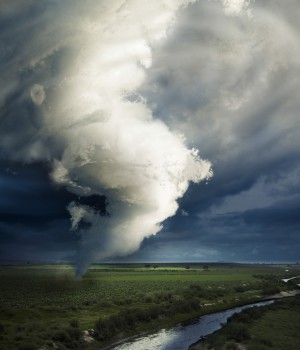 Published in the November 2009 issue of Today’s Hospitalist.

BY JUST ABOUT ANYONE’S DEFINITION, Jason Persoff, MD, has a unique hobby: He chases storms.

Every spring, the hospitalist from Mayo Clinic in Jacksonville, Fla., flies into the Midwest and sets off on a two-week trek looking for heavy weather. In the nearly two decades he’s been chasing storms, Dr. Persoff has seen everything from spectacular lightning strikes to tornados and water spouts.

He became interested in storms as a child in Aurora, Colo. While he didn’t see a lot of tornadoes during his childhood, the dramatic weather that raced across the mountain range and plains ignited his imagination.

Because watching a storm from your house is completely different than chasing it in a car, Dr. Persoff has taught himself not only the science of meteorology and severe weather forecasting, but the art of using a ham radio, GPS, satellite data and real-time radar. Go the wrong direction, he explains, and the storm you’re chasing may suddenly descend upon you.

To track the storms he’s following, Dr. Persoff downloads radar maps and weather forecasts from a laptop in his car connected to a cell phone. The technology makes the hobby a lot safer than even 20 years ago, when storm chasers had to rely on just their eyes to stay out of harm’s way.

(Most injuries to storm chasers, Dr. Persoff explains, are caused not by the storms themselves, but by car accidents that involve hydroplaning.)

His wife used to accompany him on his treks, and he’s even taken his older children on some local weather-watching trips, but Dr. Persoff tends to travel alone. Once he’s hot on a storm’s trail, however, he’ll often join forces with other chasers who are pursuing the same storm.

Some of those peers are physicians “including a hospitalist from Oklahoma and an allergist from Virginia “who Dr. Persoff has gotten hooked on storm chasing. “Severe weather lures you in,” he says. “It’s a devilishly tempting hobby once you actually start to know what you’re looking for.”

The biggest storm he’s ever seen? An EF4 tornado “EF5 storms are storm chasers’ holy grail “that nearly destroyed a Kansas town. “Your body is telling you to get away as fast as you can,” he says, “but you can’t take your eyes off it.”