For those of you who read my tongue-in-cheek blog about DeLue Certification, I did receive an e-mail back from the ABPS’ Mr. Bell with apologies for the delay in responding. He states that he has been flooded with e-mail and voicemail requests for further information about the board and reports he is just catching up.

I asked his permission to publish his edited response, which follows below. Note that I am not endorsing his certification, not that my endorsement would influence any rational hospitalist. I am also a strong advocate for the SHM and its important role in the development of our specialty. So if the SHM has reservations about ABPS, I have no doubt they are well founded.

As to the questions I’d originally posed to Mr. Bell: He mentioned that the ABPS had tried in 2005 to pursue working with SHM on certification. He also said that the costs associated with certification were necessary to maintain the rigor of the exam process.

Consequently, I think it is not unreasonable, at least for the sake of discussion, to take a pragmatic approach (as opposed to a philosophical one) when considering a board-certification provider. Following this logic and given the fact that board certification is a prerequisite for privileges at most hospitals, one might conclude that if one’s medical staff bylaws recognize the ABPS, then the value of its certification would be every bit as valid as certification from the ABMS.

One might also consider that there is no good evidence that proves a “certified” doctor is superior to the “non-certified” variety. Yet I suspect that most of us believe that testing doctor competence post-residency is a good idea, despite the lack of evidence to support its practice. Most also believe that the ABMS is the gold standard for certification–a belief that will similarly never be supported by objective evidence.

I believe most of us would agree that the statement, “I am board certified in Hospitalist Medicine,” rolls off the tongue much more freely than “I have focused recognition in Hospitalist Medicine.” Yet I still strongly believe SHM’s stated concerns about ABHM are valid. And to draw upon an analogy to heavyweight boxing (which is so often done with hospitalists): having multiple certifying bodies (at last count, there were four) has done that sport no favor. I believebABMS offers the gold standard in certifying physicians, whether that is “focused recognition” or, hopefully someday soon, true “board certification.”

It will be interesting to see how this controversy resolves. If insurers, medical staffs and hospitalists all stay on the sidelines, the ABHM controversy will quickly fade. However, if ABHM is widely accepted by payers and hospitals alike, stay tuned for Certification Controversy, Part 3.

Here is some of Mr. Bell’s response:

The response to the American Board of Hospital Medicine (ABHM) has been overwhelming and I am just now getting caught up with my e-mails. Since its launch on January 12th, I have a minimum of 50 voicemails and twice that number of e-mails for info on the ABHM–on a daily basis.

Let me give you some background. The American Board of Physician Specialties (ABPS) is the third largest nationally recognized physician multispecialty certifying body in the United States, providing board certification to both allopathic (M.D.) and osteopathic (D.O.) physicians.

The ABPS has diplomates in all fifty states, the District of Columbia, Puerto Rico, and Canada. The ABPS’ written, oral, patient simulator and clinical on-site examinations are administered by the certification staff.

ABPS offers certification in 16 specialties, most of which offer 200 question initial certification exams. One specialty, Emergency Medicine, offers a 350 question exam. Generally, the ABPS’ fail rates for our exams are 15% or greater, indicating that ABPS examinations are at parity with, or stricter than, ABMS examinations. We have, of course, no pass rate to offer for Hospital Medicine, since no exams have yet been administered. 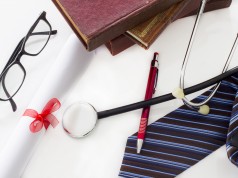