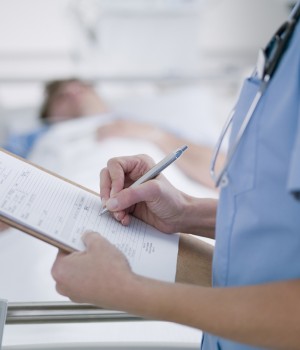 IT GOES WITHOUT SAYING that patients in the ICU are among those most at risk of dying during their hospital stay. But in many medical ICUs, relatively few critically ill patients ever have a palliative care consult called. Of those who do, many consults take place more than a week into these dying patients’ ICU stay.

That leaves hospitals trying to figure out how to get more palliative care consults requested faster in their ICUs. At the University of California, Irvine, the hospitalist-run palliative care service has found that a two-pronged approach—using both a “trigger tool” and a daily huddle—speeds up that process and boosts the consult rate. Moreover, using both strategies in tandem beats results of either tactic alone.

According to hospitalist Solomon S. Liao MD, director of palliative care services, the approach has cut the average number of days that patients stay in the ICU before receiving a palliative care consult in half, from 9.6 days to 4.8.

“The onus is on the ICU attending to opt out of a consult instead of opting in.”

“The challenge is that practically everybody in the ICU would qualify for palliative care, by definition,” Dr. Liao says. “But you don’t want to overwhelm your palliative care service.” Furthermore, while critical care doctors say they want to consult palliative care sooner, they don’t know when. “How do we figure out who should be seen and who shouldn’t?”

Finding the right tool
Spurred by a hospital administrator concerned with high ICU costs and overcrowding, Dr. Liao and his colleagues a few years ago began analyzing why their medical ICU seemed to be “bleeding money.” They found that many very sick patients stayed in the ICU a long time, and that the longer they stayed, the more likely they were to die there.

“The question arose as to how we could shorten that length of stay, given that the patient outcome would be the same,” he points out. The answer was that palliative care needed to be involved sooner.

But how? Although experienced critical care physicians and nurses can often tell who will be discharged from the ICU and who won’t, a hunch didn’t seem a good way to decide whether to call in palliative care.

It turns out, however, that the Center to Advance Palliative Care had already created a trigger tool to help ICU clinicians make that decision. In 2013, says Dr. Liao, his team of critical care and palliative care nurses and doctors took the tool, tweaked it, added it to the EHR, and made it part of the nurses’ daily routine in the medical and neurological ICUs.

The screen takes nurses no more than a “minute or two” to complete, he explains. The nurse then informs attendings during rounds which patients have screened as appropriate for a palliative care consult.

The daily huddle
But here was the next problem: Attendings didn’t always jump on that recommendation. “Sometimes the call didn’t happen for 24 or 48 hours,” says Dr. Liao. “Nurses were frustrated that they weren’t always listened to.”

As a result, he and his team in 2014 added a daily huddle on top of the screening tool. A palliative care physician—Dr. Liao or one of three other palliative care doctors—comes at a set time to the ICU and sits down with the unit attending, charge nurse, social worker and case manager. During the 15-minute huddle, they discuss all patients the trigger tool has identified. The burden is on the ICU attending to say why he or she doesn’t want a particular patient to have such a consult.

“The onus is on the ICU attending to opt out of a consult instead of opting in,” says Dr. Liao. “Sometimes the ICU doctor points out that the patient has an advanced directive and the family has already decided to withdraw care.” Or the attending explains that a patient is “getting better and should leave the hospital alive.”

The huddle delivers clear advantages. “Instead of having to wait for the busy ICU doc to process information and make the call, we are sitting right there, and he or she can just tell us to go ahead and see the patient.”

Moreover, because the social worker is present, he or she knows to prioritize patients and determine who needs family meetings convened. Case managers, meanwhile, find out earlier in the hospitalization which patients are likely to die and won’t need discharge plans. “And the charge nurse gives nurses feedback that the work they did filling out forms resulted in action,” Dr. Liao says. “It wasn’t just busywork.”

Adding the daily huddle not only sped up consults, but it also helped improve “collaboration, coordination and communication” among ICU providers, an intangible benefit the screening tool alone didn’t provide. While the process continues in the medical ICU, discussions are underway to extend it to all five of the center’s adult ICUs.

A winning combination
Dr. Liao points out that the hospital may not be saving much in the way of costs. However, the new practice “saves days of families wringing their hands in grief and anxiety.” Having these conversations sooner helps families make decisions, “so when the patient crashes at 2 a.m. and the family gets called, they already have a decision made to let the patient go at that point.”

The trigger tool alone couldn’t break down barriers to palliative care in the ICU. But Dr. Liao believes the same would be true with just the huddle alone.

“We need the tool because it makes the discussion objective and it allows critical care doctors and nurses to tell patients and families that this is the standard of care,” he notes. “This is particularly important when we are dealing with minorities or other populations who have felt discrimination before. It’s also important for the health profession to standardize care.”