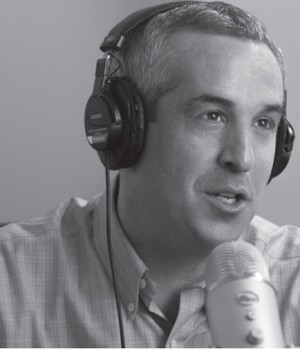 MARK SHAPIRO, MD—who is the medical director of a hospitalist program in northern California—is thriving with a new house, a new job and a new baby.

The podcast’s name is not a nod to Californian new-ageism, but to Christopher Walken’s exhortation to Will Farrell in SNL’s “More Cowbell” skit. The goal, according to each episode opener, is to explore the gulf in health care between practitioners and civilians.

While many interviews are with medical and scientific heavy-hitters, a lot of guests are not doctors—and his listeners are an even mix of physicians and non-MDs.

“That’s very intentional,” Dr. Shapiro explains. “Even in physician episodes, we don’t go deep into medical science.” He wants doctors to be able to tune in while they’re working out or driving home. “And we don’t want someone to say, ‘I don’t understand what they’re talking about, so we’re turning it off.’ It’s designed for everyone.”

The mix of guests springs from his own far-ranging interests. A third-generation physician, he majored in history at UCLA and wrote a sports column for several years for the Daily Bruin, opting for medical school after working in homeless shelters.

While he follows several sports podcasts, “I was always looking in the medical category of iTunes and not finding much engaging,” he says. (He does recommend The Doctor Paradox and ED ECMO. Dr. Shapiro records and produces each episode in his home office, relying on Skype and open-source editing software (Audacity). Friends of his who have their own podcasts helped him steer clear of possible pitfalls.

Their advice? “Make sure you have the highest quality sound,” says Dr. Shapiro, who is trying to line up Vivek Murthy, MD, the current surgeon general, for a future episode. Podcasts are available at www.explorethespaceshow.com.