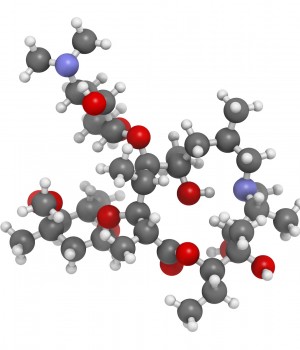 THE GO-TO AGENT for community-acquired pneumonia could put certain patients at unacceptably high risk for arrhythmias. That risk is particularly acute for the QT-interval prolongation that can lead to Torsades de pointes, especially if the drug is combined with other commonly prescribed inpatient medications.

That’s the take-home message of a retrospective study done at University of Alabama at Birmingham on azithromycin-prescribing patterns among hospital physicians. Researchers found that 76% of patients in the study who received azithromycin—the subject of an FDA warning in 2013 about prolonged QT risk—were also prescribed one or more additional QT-prolonging drugs.

That potentially risky pattern was found even when patients’ baseline ECGs on admission documented borderline or actual QT prolongation. Of the 100 patients studied, 76% received azithromycin and at least one other QT-prolonging drug, with 19% prescribed three or more such drugs in addition to azithromycin. Further, despite the risks inherent in such prescribing, only 43% of patients studied were placed on telemetry. More than half those patients were managed by hospitalists.

“This is a potential perfect storm: having patients on several QT-prolonging drugs and then not monitoring them closely.”

~ Rachael A. Lee, MD, University of Alabama at Birmingham

“This is a potential perfect storm: having patients on several QT-prolonging drugs and not monitoring them closely,” says lead author Rachael A. Lee, MD, an infectious disease fellow. “Hospitalists should be free to prescribe azithromycin if they understand the risks and potential drug-drug interactions, and think those through before adding more QT-prolonging drugs.”

Too few telemetry orders
The research found that nearly half the patients studied also received ondansetron, while 23% were prescribed trazodone, 17% moxifloxacin and 10% promethazine—agents known to prolong QT.

The biggest surprise, Dr. Lee reports, was the lack of any correlation between baseline ECG findings and subsequent telemetry ordered for patients prescribed azithromycin and other drugs. Only 21 patients whose baseline ECGs showed borderline or prolonged QT were placed on telemetry. Nor was the performance of repeat ECGs commensurate with patients’ risk for arrhythmias.

Given the risk associated with those medications, she adds, it would have been reasonable to monitor all of those patients.

Needed: a new alert
The findings clearly suggest that physicians could use more education on azithromycin risks, particularly in the setting of other QT-prolonging drugs. But Dr. Lee points out that other factors likely contribute to those prescribing patterns. She suspects many other institutions might find similar patterns if they delve into their own data.

For one, the EHR in her 1,157-bed facility doesn’t have a mechanism to produce a flag or alert when a physician adds on multiple QT-prolonging drugs.

This is a real problem, given how significantly azithromycin prescribing has increased in the hospital: from 15 days of therapy per 1,000 patients in 2002 to 40 per 1,000 in 2013. Nor does the system prompt prescribers to order telemetry when they order multiple drugs with QT-prolongation risk.

At the same time, the hospital’s EHR “makes it very easy,” Dr. Lee explains, to add orders for common drugs like ondansetron and trazodone.

Off-label use common
Dr. Lee also notes the trend, increasingly reported in the literature, toward prescribing azithromycin off-label as an anti-inflammatory for such conditions as COPD, pulmonary edema, cystic fibrosis and lung transplant. In the Alabama study, which included patients hospitalized between October 2012 and April 2013, 20% of patients prescribed azithromycin received it for conditions other than pneumonia or another infection.

The other key issue, in Dr. Lee’s view, is that the 2013 FDA warning doesn’t provide clear guidance on which patients shouldn’t take the drug.

“It’s a nebulous warning, which is probably why it hasn’t made it into electronic clinical decision-support systems, including ours,” she says. It would help, she adds, if the FDA warning at least called for closer monitoring of patients prescribed azithromycin, particularly when taking other similar-acting drugs.

Dr. Lee points out, for example, that nine patients in her study were taking azithromycin chronically for lung disease. That put them at potentially higher risk for adverse events if other QT-prolonging drugs were added in the hospital.

Further, the researchers found that azithromycin dosing was, in her words, “all over the map.” While recognizing that the study’s 100 patients represent a small cohort, Dr. Lee was nonetheless surprised to find a wide variation in the duration of therapy. That was true even when azithromycin was ordered empirically for its most common use: suspected simple pneumonias.

“Some patients were given five days and some were given 14,” she notes. The university has since changed its EHR to require those ordering azithromycin for pneumonia to go to a drop-down box and choose the standard (for that indication) seven-day duration.

The need to adjust protocols
The university’s infectious disease department has also embarked on a campaign to educate prescribers—starting with residents and moving on to others—about the risks inherent in prescribing azithromycin. That effort emphasizes the need for routine monitoring in patients at relatively higher risk for arrhythmias based on their number of QT-prolonging drugs and/or their baseline ECG results.

When asked how hospitalists might turn study findings into an action item, Dr. Lee recommends a two-pronged approach. Groups should first examine the prescribing patterns in their own facilities and then consider adjusting protocols to at least prompt hospitalists to more carefully consider drug-drug interactions with azithromycin.

“I also encourage hospitalists to look closely at QT on any sort of admitting ECG, and think through whether it is a risk factor in deciding to order telemetry,” she says. That’s important, she adds, for patients on one or more QT-prolonging drugs.