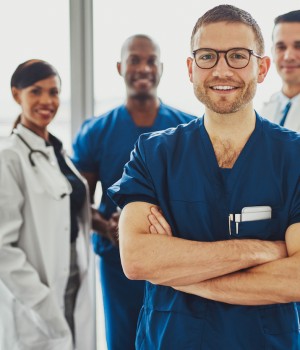 Published in the April 2012 issue of Today’s Hospitalist

MEDICAL STUDENTS AND RESIDENTS have always been a great source of cheap labor. Hospital medicine hadn’t reached the Midwest when I was in training, and MD2Bs literally kept hospitals running, particularly at night. In a sense, these MD2Bs were de facto hospitalists.

The specialty of hospital medicine has radically transformed the landscape of American hospitals. Although there are still plenty of MD2Bs running around, they are either attached to hospitalists or otherwise interacting with them during rotations on other services.

The Today’s Hospitalist’s 2011 Compensation & Career Survey found that 42% of hospitalists work in teaching hospitals. An older data set from the Society of Hospital Medicine (SHM) has numbers in the same ballpark. According to the 2007-08 SHM biannual survey, 28% of hospital medicine groups were located at “major teaching” hospitals while another 28% were at “other teaching” hospitals.

Medicare connection
The Centers for Medicare and Medicaid Services (CMS) has a scary, huge budget in the neighborhood of $760 billion a year. It’s impossible to comprehend a number unless you compare it to something else “but what can you compare it to?

Google, which is trading at roughly $600 per share, has a market capitalization of only $195 billion. Here’s one way to put it: Using your paycheck as the yardstick, the CMS budget is equivalent to the gross salaries of 3 or 4 million hospitalists, give or take a few.

Medicare uses its vast budget for various expenditures. A big chunk of it pays for medical services for its beneficiaries. Dollars are also earmarked for graduate medical education (GME), which funds residency programs, including residents’ salaries.

Although Medicare pays poorly, it’s way too big to ignore. Hospitals, doctors and even lowly residents are under its thumb. This means that Medicare makes all the rules about how medical students and residents can be used to deliver billable services.

MD2Bs
Having once been there, we generally have a pretty good idea what medical students and residents look like “short coats, long coats, the military-like hierarchy. The CMS, thinking in terms of dollars (and maybe quality), sees things a little differently.

According to the CMS, a medical student is “an individual who participates in an accredited educational program (e.g., medical school) that is not an approved GME Program and who is not considered an intern or resident.” Clear enough. Moreover “pay attention now “”Medicare does not pay for any services furnished by these individuals.” This will come into play a little later.

Teaching physicians
Hospitalists working with medical students and residents are called teaching physicians. From the CMS’s standpoint, these are physicians “other than an intern or resident, who involves residents in the care of his or her patients. Generally, for the service to be payable … he or she must be present during all critical or key portions of the procedure and immediately available to furnish services during the entire service.”

Although a little Clintonian “”It depends on what the meaning of the word ‘is’ is” “the folks at the CMS include two additional descriptors to either clarify or confuse. A teaching physician is considered physically present when he or she is “located in the same room as the patient” (duh). And “critical or key portions” is defined as a “part or parts of a service that the teaching physician determines are a critical or key portion” (a little squishy).

Simplified and condensed, the teaching physician needs to be in the same room as the patient and resident for whatever the teacher feels are important portions of the encounter. (If a resident is performing a minor procedure, such as sutures for a simple laceration in the ED, the teaching physician must be present for the entire procedure. This is an area that gets overlooked a lot.) Moreover, residents themselves cannot be teaching physicians. (Hold that last thought for a few paragraphs.)

In addition, teaching physicians must document that they agree with the resident’s documented plan of care ” and adhere to other, very specific documentation requirements. At a minimum, the teacher must document that “he or she performed the service or was physically present during the critical or key portions of the service furnished by the resident.” Teachers must also note their participation in the management of the patient.

Finally, E/M codes used to bill any service must be submitted with something called a GC modifier. This modifier indicates that the “service has been performed in part by a resident under the direction of a teaching physician.”

Local comedy
We recently got involved in a case that demonstrates the perils of working with medical students and residents.

A patient was received by a medical student who performed the initial hospital care. A resident later co-signed that student’s work. Subsequently, a teaching physician signed off on the resident’s work. There was, however, no evidence in the medical record that the teacher was physically present for key portions of the encounter.

This short case presents an astonishing number of problems. Here are just a few:

Word to the wise
Working with medical students and residents is very rewarding, and your reasons for doing it should be primarily altruistic. But it’s very doubtful that they will enhance your productivity if you do everything above board. As always, cutting corners “while tempting “engenders enormous personal and organizational liability.

And keep this in mind: Patients are becoming much more savvy about the services they receive and who performs them. Patients often call Medicare to report that they never saw “the doctor” who’s listed as the billing provider on their bill. Instead, they saw only a medical student or resident. Oops!