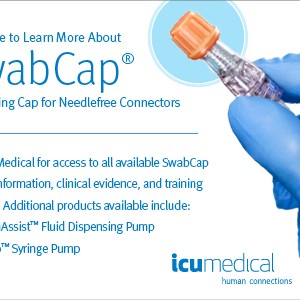 Published in the April 2013 issue of Today’s Hospitalist

STUDY RESULTS published this January in the American Journal of Infection Control were startling: Three Chicago-area hospitals significantly boosted disinfection rates simply by putting disinfecting caps on patients’ catheters when not in use.

The caps, which are filled with 70% isopropyl alcohol, twist on each catheter’s needleless connector, disinfecting and protecting it from contamination. Researchers found that using the caps led to fewer infections, fewer contaminated lines and less dense organisms in lines that were contaminated.

The star of the study was a product called SwabCap, a bright orange cap that comes packaged in what looks like an individual coffee creamer. Once nurses have flushed a PICC or central line, they twist a SwabCap on the end and leave it in place; before using the catheter again, they untwist the cap and discard it. Placing the cap on the access valve releases the alcohol around the connector, disinfecting it and protecting the catheter from touch and airborne bacteria.

“The passive disinfecting technique is a major improvement over what has been standard operating procedure: having nurses clean connectors for 15 seconds and letting those dry before they’re used,” says Tony Saia, vice president of global marketing for Excelsior Medical, SwabCap’s manufacturer.

In developing the product, Mr. Saia explains, the company worked “with hundreds of nurses across the country. We found that nurses had trouble cleaning the valves to the extent that they needed to be cleaned.”

Even when nurses scrubbed the valves for the prescribed time, he adds, “some devices are extremely hard to clean. The connectors lay in bed with patients, perhaps on their skin or under the sheets, building up debris that may be pushed into the catheter if not properly cleaned.”

The issue of preventing catheter-associated infections has taken center stage. The Centers for Medicare and Medicaid Services has stopped paying to treat hospital-acquired, central-line associated bloodstream infections, which cause thousands of deaths per year and cost billions of dollars. One highly visible project funded in part by the AHRQ has significantly reduced those infections in ICUs in more than 40 states.

That project features a bundle of innovations including the use of checklists and sterile barrier techniques. Even when those processes are strictly followed, says Mr. Saia, “studies have shown that infection rates have gone down dramatically, but then plateau. “What’s often missing, he adds, is the ability to more effectively reduce intra-luminal contamination.

SwabCap is also now being packaged as part of the company’s SwabFlush system, a saline flush syringe with a SwabCab built into a syringe plunger. More information is available at Excelsior Medical.