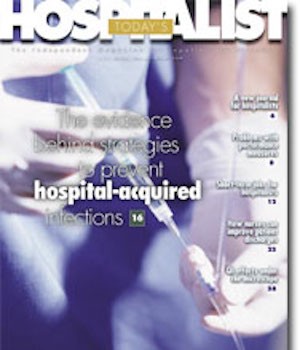 Published in the November 2005 issue of Today’s Hospitalist

Hospital-acquired infections is a hot topic these days, and not just among physicians.

From public health organizations like the CDC to advocacy groups like the Consumers Union, all kinds of people are taking a keen interest in hospital-acquired infection.

In an era in which health care information is increasingly transparent, it’s no secret that nosocomial infections have a serious impact on morbidity and mortality. As a result, hospitals are being required to publicly report their infection rates, a trend that is focusing increased attention on these infections.

That’s where hospitalists enter the picture. When it comes to preventing hospital-acquired infections, particularly bloodstream infections from catheters, hospitalists are in a unique situation to implement strategies that have been proven to help prevent these infections.

Dr. Saint, a research investigator at the Ann Arbor VA Medical Center and an associate professor of medicine at the University of Michigan Health System in Ann Arbor, reviewed the latest strategies to prevent a variety of infections, from ventilator-associated pneumonia to bloodstream infections.

There are 150,000 cases in the United States of nosocomial bacteria each year, and most are due to central venous catheters. The good news is that there are modifiable risk factors that hospitalists can address to prevent some of these infections.

“This is a handy rule of thumb you can teach to housestaff or students: 1 percent, 2 percent, 3 percent,” Dr. Saint said.

Other data, however, make a more concrete connection between the site of a central line and its impact on infection rates. An eight-center French study published in a 2001 issue of JAMA, for example, randomly assigned patients to have a central line placed in the femoral or subclavian site.

While the data give hospitalists a strong reason to prefer subclavian lines over femoral lines, Dr. Saint noted that the evidence is a little less clear on the difference between subclavian lines and internal jugular lines.

“Observational studies have shown that there is probably a slightly increased risk of infection in people who have IJs compared to subclavians,” Dr. Saint said, “but it’s probably not a high enough risk to justify putting in a subclavian if you don’t feel comfortable putting in a subclavian, or putting a subclavian in people who may have problems if there are mechanical complications. The most important message is that we should avoid the femoral site as much as possible.”

He also suggested following the CDC’s guidelines, which he said conclude that that peripheral lines are better than central.

“Even though PICC lines technically are central lines and no high-quality randomized control studies have looked at PICC vs. subclavian or PICC vs. IJ or PICC vs. femoral lines,” Dr. Saint said, “I think that if we can get away with peripheral lines, we should.”

In the past, Dr. Saint said, physicians have tended to routinely change catheters after about four days, even if there is no evidence that a central line infection existed.

“When I was a house officer in San Francisco,” he explained, “every four days we would change a patient’s line, either over a guidewire or at a new site if we really wanted to reduce the risk.”

While routinely changing central lines may sound like a good idea, the evidence paints a different picture. Dr. Saint cited data from a 1997 meta-analysis in Critical Care Medicine of 12 trials that concluded that exchanging catheters over guidewires or at new sites did not reduce infection compared with as-needed replacement.

Dr. Saint said that if the patient shows obvious signs of infection ” a spike in temperature or unexplained leukocytosis “or you suspect a local site infection, you need to change the line and send the tip for culture. “But just exchanging it when there’s no indication that the person may be infected from the central line would not be appropriate,” he added. “We should just say no to routine wire changes.”

While there are several types of coated catheters to choose from, chlorhexidine-silver sulfadiazine catheters have received the most attention in clinical research.

Dr. Saint was co-author of a meta-analysis in a 1999 issue of JAMA that found that these catheters decreased the risk of catheter- related bloodstream infection by up to 45 percent when compared to noncoated catheters. But because chlorhexidine coated catheters cost almost twice as much as regular catheters “$ 50 instead of $25 “some experts have questioned their real cost-effectiveness.

Dr. Saint said that when all the factors of the coated catheters are taken into account “their purchase price, their potential impact on length of stay, the decreased utilization of antibiotics, etc. “using an antiseptic catheter can save money, prevent infections and save lives.

To convince his critical care oversight committee at the University of Michigan that it makes sense to use coated catheters, Dr. Saint and his colleagues conducted an economic analysis on data from the university’s patients. Even if you assumed that only half of the reduction in the infection rate was from the use of the coated catheter, he said, you would still see enough savings to pay the salary of a hospitalist for a year.

“If your rate of catheter-related bloodstream infections is unacceptably high despite other interventions such as limiting femoral lines,” he said, “I would recommend antimicrobial catheters.”

Chlorhexidine as a disinfectant

Dr. Saint and colleagues performed a meta-analysis of both published and unpublished studies “one of the largest studies on the topic was never published “to examine the relative efficacy of the agent. They found a statistically significant decrease of about 50 percent in the risk of catheter-related bloodstream infections in patients randomized to chlorhexidine when compared to povidone iodine.

While price is one consideration “chlorhexidine costs about twice as much as povidone iodine “Dr. Saint said it should not be the primary factor driving decisions.

Dr. Saint said that one stumbling block is that relatively little is known about chlorhexidine’s effect when combined with other anti-infection strategies like maximum sterile barriers or antimicrobial catheters. Because studies to date of chlorhexidine have compared it only to other agents, and not other techniques, there are no data to answer that question.

“It’s not clear if chlorhexidine adds anything to maximum barriers or antimicrobial catheters,” he said, adding that he is inclined to use it anyway.

“I think at this stage, given the small amount of increased cost and the clear benefits, chlorhexidine for site disinfection appears very promising. A lot of hospitals are moving towards this.”

While nearly one out of every four hospitalized patients will be catheterized at some point during their stay, Dr. Saint said research has shown that many of those catheters are unnecessary.

He pointed to a study in a 1995 issue of Archives of Internal Medicine, for example, that found the initial indication for urinary catheterization was unjustified about 20 percent of the time. As researchers followed patients during their hospital stay, the problem worsened. There was an appropriate indication for the urinary catheter to remain in those patients only about half the time.

Unnecessary catheters are a problem not only because they can lead to infections, but because they restrict activities of daily living, something Dr. Saint noted should cause hospitalists in particular to take note.

“As hospitalists, we’re trying to get patients out of bed to prevent decubitus ulcers and DVTs from forming and to get them ready to go home,” he explained, “but the reality is that having a urinary catheter almost acts like a restraint tethering them to their bed.”

One of the keys to reducing the inappropriate use of urinary catheters, Dr. Saint said, is to remember that patients have a urinary catheter. While that advice may sound obvious, it’s often easier said than done.

“The drainage bag is often on the opposite side of the bed when we examine patients,” he explained. “The tube itself can be obscured by bed sheets. And the genitourinary exam isn’t part of the daily physical examination.”

One solution to forgotten or neglected urinary catheters is a system that reminds physicians that a catheter is present “and should probably come out. In a study in a 2003 issue of the American Journal of Medicine, physicians received a computerized reminder that their patients had a urinary catheter 72 hours after insertion. The intervention reduced the average amount of time patients were catheterized by about three days.

At the University of Michigan, where Dr. Saint practices, the hospital does not yet have a computerized physician order entry system. As a result, Dr. Saint helped create and implement a simple written reminder that is put on the chart 48 hours after a patient is catheterized.

A recent study in a 2005 issue of the Joint Commission Journal on Quality and Patient Safety led by Dr. Saint found that the system led to a one-day decrease in catheterization. The study also found that the per-protocol effectiveness of the system would save more than $50,000 a year in hospitals with a census comparable to the University of Michigan.

(For more information on this study, see the October 2005 issue of Today’s Hospitalist online at www.todayshospitalist.com.)

While the manual system worked reasonably well, Dr. Saint said the evidence show that a computerized reminder system is ideal. “A computer is more effective and is likely much less expensive,” he said. “You don’t have to pay a research nurse to go around looking under bed sheets, issuing reminders and then bird-dogging interns about filling out a form.”

“But if you’re one of the 85 percent to 90 percent of hospitals that don’t have CPOE,” Dr. Saint added, “a written reminder is better than nothing at all.”

While those more recent data may have discouraged physicians from using condom catheters, Dr. Saint said the devices can be effective in the right patients. He said that the problem with condom catheters is simple: Every time a patient removes a condom catheter or the condom catheter gets kinked, a nurse has to put the catheter back on and clean the meatus. “Studies have shown that rigorous meatal cleaning actually increases the risk of developing urinary tract infection,” Dr. Saint explained.

As a final note, he concluded that while an external catheter is available for women, it requires so much adhesive that it isn’t practical.