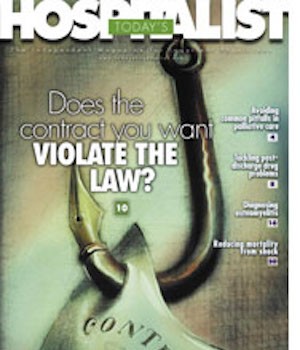 Published in the July 2005 issue of Today’s Hospitalist.

It’s late in the afternoon when the hospital’s vice president of medical affairs calls you into her office with a proposal: If your hospitalist group can reduce length of stay and costs of care for stroke patients, your physicians will receive a bonus.

The idea is that reducing length of stay will improve care for these patients, producing a win-win situation for everyone. When the concept is reviewed by an administrator for final approval, however, the deal gets nixed. The administrator worries that it smacks of an inducement to reduce care to Medicare patients “and is therefore illegal.

Concerns about violating anti-kickback statutes and other federal regulations are nothing new for hospital administrators, but experts say that when it comes to hospitalists, misconceptions abound. Those misconceptions are leading not only to fl awed interpretations of laws regulating contracting and compensation, but they are hurting the ability of hospitalists to earn what they deserve.

Some administrators, for example, worry that they will violate the anti-kickback rules that govern Medicare if they pay hospitalists stipends based on performance. And officials at non-profit hospitals often worry that similar compensation arrangements for hospitalists will endanger their tax-exempt status.

Part of the problem is that many administrators are still trying to get their arms around hospital medicine. And because the specialty occupies a unique position ” hospitalists are neither traditional site-based physicians nor specialists who can count solely on billings to generate sufficient revenues ” administrators often make basic mistakes in interpreting laws that regulate physician contracting and compensation.

As a result, experts say, many of the arrangements that are vetoed by hospital administrators may be perfectly legal “as long as they’re structured to stay on the right side of the law. In the above scenario, for example, which was described during a presentation on economic and legal issues for hospitalists at the annual meeting of the Society of Hospital Medicine (SHM), the key is not whether hospitalists will receive an incentive, but how it’s structured.

“It is permissible,” says Andrew Knoll, MD, JD, a former hospitalist who now practices health law with Scolaro, Shulman, Cohen, Fetter & Bernstein in Syracuse, N.Y. “But the [parties] would be much better off if they developed an incentive that’s directly related to outcomes improvement, which might, incidentally, reduce costs.”

Stephen Houff, MD, CEO of Hospitalists Management Group, a hospitalist management company in Canton, Ohio, has seen first-hand some of the confusion that results when hospital administrators deal with complex rules about how to compensate non-employee hospitalists and what constitutes fair market value. “That’s really the only major legal issue we’ve run into in these negotiations,” he says, “what amounts to fair compensation for hospitalist services.”

But the way administrators try to live up to those rules can be perplexing. Officials at some non-profit hospitals, for example, have told Dr. Houff that they worry they might jeopardize their tax-exempt status if they pay physicians more than the 50th percentile of average earnings for the specialty, based on national survey data. Others have set the cut-off at the 75th percentile, he notes.

That approach is frustrating, he says, because there is little in the way of reliable data on hospitalist incomes. “Being a physician and not an attorney,” Dr. Houff says, “some of this seems a bit nutty to me. I suspect that it’s a bit overblown.”

And because hospitals are concerned about losing their cherished tax-exempt status and violating what is known as the “private-benefit rule” by paying their physicians excessively, they tend to be overly conservative in structuring payments or subsidies to hospitalists.

Consider another example, which was presented at the SHM meeting earlier this year: You’re negotiating with the administrator of a not-for-profit hospital about the stipend your group will receive when the program starts operating, including incentives for such services as handling uninsured patients’ admissions. The administrator agrees that the “extras” ought to be compensated separately, but he claims that the amount in question can’t exceed 20 percent of the base salary because of the private-benefit rule.

Dr. Knoll says that in the above scenario, a hospital wouldn’t risk running afoul of any rule or law by potentially setting that percentage higher than 20 percent. “The issue here is fair-market value,” Dr. Knoll explains, “and there are no ceilings or caps. It’s whatever the market will bear.” Setting the rate 15 percent or even 30 percent of physicians’ base salary, he adds, would not necessarily be a problem.

While Dr. Knoll understands hospitals’ concerns about their non-profit status, he says the concerns are simply overblown. “They get nervous about violating the private-benefit rule when they give $45,000 to a hospitalist,” he explains, “but there’s really no legal issue at stake. It’s more of a fear than a reality.”

As long as hospitalist compensation is in accord with the marketplace and representative of the level of services provided, Dr. Knoll contends, the hospital isn’t on shaky ground.

“The odds are that if your hospital tells you it can’t do something because of 501(c) 3 rules, that’s probably not true,” he explains. “The hospitalist who is cognizant of that can be prepared for that argument when it comes up.”

Focus on outcomes, not dollars

One way to steer clear of conversations about Medicare’s anti-kickback rules and concerns about endangering tax-exempt status, experts say, is to focus on matters of quality, not money.

“Hospitalists improve outcomes and safety, and a successful program can increase the productivity of other physicians and possibly convert an unprofitable case to a profitable one,” explains Richard Rohr, MD, director of hospitalist services for Milford Hospital in Milford, Conn. “Those are the talking points you can use when you’re approaching administrators about compensation.”

Experts are also quick to point out that as giant payers like the Centers for Medicare and Medicaid Services (CMS) unveil programs linking outcomes to reimbursement, hospitalists will likely see an improvement in their negotiating position.

“The key point to remember is that hospitals can subsidize you legally, but there are strict requirements that must be met in the relationship that results in the subsidy or financial support,” explains Winthrop Whitcomb, MD, founder of the hospitalist program at Mercy Medical Center in Springfield, Mass, and a co-founder of the SHM. “Another key point is that if the hospital subsidizes you, you must cooperate with them. If you don’t, they can legally get rid of you.”

Here are some of the legal areas that hospitalists might encounter in their discussions with hospital administrators and executives, and a look at related issues that may “or may not “pose a potential legal problem for either party:

While gainsharing may make sense economically, it has been outlawed since 1999 among hospitals that accept Medicare patients. Earlier this year, however, the HHS Office of Inspector General issued several advisory opinions that sanctioned certain forms of gainsharing. That ruling may allow hospitals to financially reward physicians who help control costs.

Some experts predict that in the near future, hospitalists may find themselves being asked to participate in cost-saving initiatives. Likely initiatives could focus on drug usage, post-surgical care protocols or wound-care outcomes that may
reduce length of stay.

For now, however, Dr. Whitcomb says that the advisory opinions have involved only surgical products and procedural specialists. As a result, it’s too soon to say what the development means for hospitalists.

Nonetheless, gainsharing is a concept that’s likely to hit hospitalists’ radar screen, especially as the pay-for-performance movement intensifies. That’s why it behooves you to understand its legal underpinnings.

“The hospitalist community is probably hearing about gainsharing,” says Howard Young, a former OIG attorney who is now a partner in the health law practice of Sonnenschein, Nath & Rosenthal LLP in Washington. “It’s just a matter of time before doctors who admit a lot of patients say, ‘Well, what about me?’ ”

“The problem is that these arrangements must be structured in a way that will pass muster with the government,” Mr. Young adds. “And given the current statutory framework, that’s far more difficult to do with doctors who are not proceduralists.”

If hospitalists are approached by an administrator about participating in a gainsharing initiative, Mr. Young advises, obtain an OIG advisory opinion first. Mr. Young largely echoed the advice of other panelists: If you’re working on clinical-quality initiatives that might also save money over the long run “developing a deep-vein thrombosis prophylaxis protocol, for example “you’re better off being paid an hourly or project rate.

“Rather than paying hospitalists based on a percentage of cost savings,” Mr. Young says, “it’s probably better to pay for their time as medical advisors. That’s perfectly appropriate from a legal perspective if it’s structured as a personal-services agreement at fair-market value. Even though developing a clinically appropriate protocol may end up in cost savings, that’s a legally difficult permutation of gainsharing.”