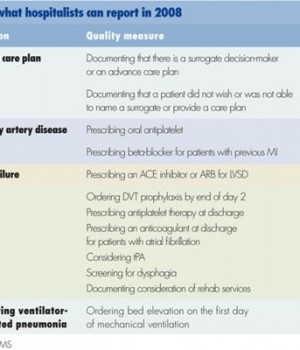 The new year once again rings in a raft of CPT coding changes, courtesy of the AMA. Those changes take effect at the beginning of this month.

The good news is that out of a total of 223 CPT code changes for 2008, only a few will affect hospitalists. Probably the most significant change for hospitalists is a set of new codes that both physicians and midlevels should use when billing for a team conference on patient care.

The CPT for 2008 also includes new codes for doctors and midlevels to report when communicating with patients via phone or online. Stay tuned to see if Medicare “and other carriers “will pay for those codes, which don’t involve face-to-face services.

Other CPT changes this year include some revised codes for the Physician Quality Reporting Initiative from the Centers for Medicare and Medicaid Services (CMS). Keep in mind that the CMS no longer allows a grace period for implementing code-set changes, so these changes need to be implemented now.

E/M coding changes
Among the eight new evaluation and management (E/M) codes, physicians and midlevels should use three to report time spent as part of a medical team discussing a patient’s care. (The new codes replace team conference codes 99361-99362.)

You can report the new codes only when the conference lasts 30 or more minutes. The codes in the new set are based on the type of provider and whether conferences are face-to-face with the patient. The new codes are as follows: 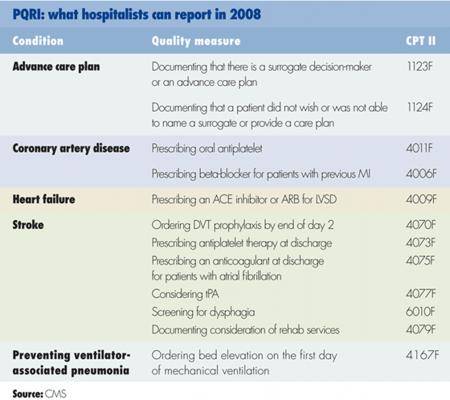 The codes pertain to calls initiated by established patients. They are not to be used to report calls that are a continuation of a previous visit in the last seven days or for post-operative patients. The codes also should not be used if the patient is seen for a face-to-face visit in the next 24 hours or at the next available urgent visit.

Because hospitalists will ideally follow up with patients relatively soon after discharge, the seven-day restriction of these codes “and the fact that patients have to initiate calls “may make them less than ideal for hospitalists. For situations in which a patient follows up with you after seven days, however, these codes may be of use.

The physician codes for E/M services are:

The codes for non-physicians for assessment and management
are:

“¦and online care
The CPT for 2008 also created a new code, 99444, for online medical evaluations. Physicians should use this code when evaluating a patient via e-mail or over the Web. (For non-physicians, the CPT has created an online assessment and management code, 98969.) Note that the service being reported with this code cannot be a continuation of an E/M service that was provided within the previous seven days.

In the past, Medicare and many other carriers have not paid for phone calls or other services not provided face-to-face with a patient or family member. While it is unlikely that the CMS will pay for these codes, the official word is not out yet. It will be interesting to see if private payers recognize these codes and reimburse for them.

Other changes for hospitalists include the deletion of code 43750, percutaneous placement of gastrostomy tube, without imaging or endoscopic guidance. In its place, CPT has introduced a new code “49440 “that covers gastrostomy insertion.

PQRI code changes
Finally, hospitalists should use one of two new codes when documenting advance care planning within the PQRI. The PQRI is a voluntary reporting program that encourages physicians to report their use of clinical performance measures when treating Medicare patients.

According to reports at press time, one of the 11 measures that hospitalists were asked to report on in 2007 has been retired. The deleted measure was for beta-blocker upon arrival for acute myocardial infarction.

And hospitalists in 2008 can now report on a new measure related to preventing ventilator-associated pneumonia. (See “PQRI: what hospitalists can report in 2008,” above.) The complete list of measures can be found in the 2008 Medicare physician fee schedule.

While it is yet to be determined, the 2008 PQRI bonus payment will likely be between 1.5% and 2.0% of total allowed charges for covered Medicare physician services. (The 2007 bonus was 1.5%.) According to the Society of Hospital Medicine, the typical bonus amount for hospitalists who report throughout 2008 should be around $1,600.