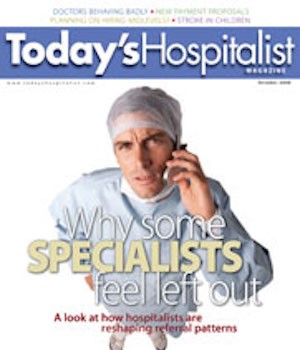 Published in the October 2008 issue of Today’s Hospitalist

When meeting with community doctors to work out new referral agreements, James Castillo, MD, always asks primary care physicians if they have specific preferences about which subspecialists the eight hospitalists in his group should call for a consult.

While primary care physicians typically understand and even agree with such an approach, specialists can be another story. That’s because specialists are experiencing what could be viewed as a seismic shift in inpatient referral patterns.

Those patterns, which have been entrenched for years, are changing as hospitalists either do some of the work traditionally done by specialists, or as hospitalists embrace different priorities when assigning referrals. When two consultants offer the same quality of care, hospitalists say, they’ll opt for the doctor who responds more quickly over a subspecialist who’s had a longstanding relationship with a primary care physician.

The result can be catastrophic for specialists. A single hospitalist group that admits half of a hospital’s patients, for example, can make or break the fortunes of local specialty groups. And while some specialists are pushing back, hospitalists are finding that subspecialist complaints don’t carry as much weight as they once did.

A power shift
When it comes to complaints about referrals from either primary care physicians or subspecialists, hospitalists say they attend to primary care grievances a little more closely.

“We’ve had both situations, but you have a bit more leeway if it’s a subspecialist complaining,” says Timothy Osonma, MD, one of nine IPC hospitalists who work at Methodist Hospital in San Antonio. “The primary care doc is the one who ‘has’ the patient, so you want as much as possible to use whomever he wants you to use so long as it is reasonable.”

But according to Dr. Castillo, medical director at Valley Baptist Medical Center-Harlingen in Harlingen, Texas, primary care physicians don’t typically get too excited when hospitalists don’t use their preferred consultants. After all, he explains, most office-based doctors realize that “learning the practice patterns of 40 different primary care providers is not going to be 100% accurate.”

Primary care physicians “who also want what’s best for the patient “know too, he adds, that hospitalists are taking a harder line on what’s good for patient care.

“In the past, you might have said, ‘I know the patient might stay longer, but I’m going to help you out,’ ” he says, referring to subspecialists who might not be so quick to respond. “But these days, when you are spending thousands of dollars a day on hospitalization and exposing patients to the risks of the inpatient setting, there isn’t a valid reason anymore just to wait for a specialist.”

Hospitalists say that if a dispute about referrals gets kicked up to administration, executives are no longer automatically in the subspecialists’ corner. Administrators are just as interested in hearing hospitalists’ side, a change that reflects not only hospitalists’ ability to produce savings, but their growing presence as well. After all, hospitalists report, a growing number of chief medical officers are being promoted from their ranks.

That doesn’t mean, however, that hospitalists can ignore festering resentments or unresolved antagonism. Hard feelings that arise from shifting referrals can boil over into hardball hospital politics, creating retention problems for both subspecialists and hospitalists.

“One of the major reasons hospitalists leave their programs,” explains Ken Simone, DO, a family physician in Veazie, Maine, and a national hospitalist consultant, “is that they don’t have collegial support.”

Share the wealth
When selecting consultants, most hospitalists say they tend to follow a certain pecking order. At the top of the decision tree, says Dr. Osonma, is patient preference.

“If a patient says, ‘This is who I want to use,’ then we just do it, period,” he says. Usually, however, the primary care preference takes precedence “with a hospitalist-preference trump card.

Some hospitalists go out of their way to keep the peace. Muna Enshiwat Salman, MD, an IPC hospitalist who works at two suburban Chicago hospitals, says her ultimate goal is to try to make sure all the consultants get some business.

“I’ve been practicing for nine years, and every place I’ve gone, I’ve found there are a lot of good physicians,” says Dr. Salman. “I don’t want to narrow my horizons.”

When choosing specialists or surgeons, she lets the acuity of patient illness “and her experience with specialists’ response times “be her guide. “If the person is not that sick, then I will go with the preference of the PCP, of the group or of the insurance. We are lucky to be busy enough to be able to share the wealth.”

“The cardiologists who wanted to work with us put pressure on their colleagues,” Dr. Osonma says. “They said it was just not reasonable for us to have to go look at a list to make a referral.”

Sizing up the opposition
Sometimes complaints from subspecialists about shifting referral patterns arise from misunderstandings.

Dr. Castillo recalls a local cardiologist who effectively functioned as the primary care physician for some cardiac patients, although his name was not listed as primary on their records. When those patients were admitted, hospitalists assumed they were unassigned, and referred them to other primary care providers. The cardiologist thought they were trying to steal his patients.

After discussing the situation with the cardiologist and hospital administrators, Dr. Castillo says the cardiologist is now one of the hospitalists’ “main go-to guys” when discharging cardiac patients. “Now we have a very good relationship.”

“When people think it’s a conspiracy, they get angry,” says Dr. Castillo. “When they understand that it may have been a mistake, it’s very collegial.”

Hospitalists also find they may get better service from specialists if they make it clear that they’ll need to opt for another referral. While some subspecialists are left grumbling, others “try to improve their availability” when hospitalists point to their need for a quick response, says Dr. Salman.

She recalls picking up a problem in a patient’s abdomen, calling a surgeon and being told that he was an hour away. “I had to say, ‘I will have to choose somebody else instead because I am pretty worried about this patient,’ ” she says. “But I’ve noticed that in the future, it makes them more aware. Telling specialists that they may lose consults if they’re not available has made them more attentive.”

When competition is an issue
Certain specialties, such as gastroenterology, are usually only too happy to have hospitalists treat the medical issues of patients and leave the consultants more time for procedures.

But some specialties, on the other hand, can be a tougher fit. Cardiology and pulmonology groups, for instance, often got used to doing “and being paid for “work that hospitalists now do. Dr. Osonma says that his group originally ran into problems with a pulmonology group in which the physicians functioned more like hospitalists than as pulmonologists.

“We were very honest with them and said if they were not going to just do pulmonology but also do hospital medicine, then it would be against our business interest to refer patients to them,” says Dr. Osonma. “Only one or two of the pulmonologists in that group continue to function as hospitalists. At the same time, he admits, “We don’t consult with that group very much at all.”

Conflict resolution
Hospitalists wanting to make peace at their institution need to “make the case that they believe in clinical outcomes first and we will consult you when appropriate,” says Dr. Simone. Hospitalists just setting up programs should meet with subspecialists to explain their objectives and their philosophy of consultations. Specialist groups complaining of losing business “pulmonologists, for example “may need to retarget their practice toward more outpatient procedures.

When trying to resolve disputes, Dr. Simone urges groups to keep track of subspecialists’ response times and to share those with consultants and administrators. It also helps to track quality data about your hospitalist group, including morbidity, mortality, return rate to ICU, 30-day readmission rate and patient satisfaction scores.

If subspecialists are still disgruntled, consider designating a local emissary “the primary care physician, for example.

“It’s incumbent on you, the hospitalist, to make your case to the primary care providers. Otherwise you will hurt your business,” says Dr. Simone. “You need to say, ‘I know you want Dr. Jones, but at 2 a.m., I need someone to come when I call because I am the one liable. Why don’t you call him and explain this, and maybe he will respond to you. Because we have tried working with him and we can’t seem to get him to budge.’ ”

What to do with a small specialist pool

WHILE HOSPITALISTS ARE ASSERTING their right to choose consultants in big hospitals, that’s not always the case in smaller facilities. That’s because there usually aren’t other options if one consultant is unresponsive or hard to work with.

In those situations, Ken Simone, DO, a hospitalist consultant in Veazie, Maine, recommends that hospitalists invite all their “customers” “both primary care referrers and specialty consultants “to monthly or quarterly “user group” meetings to open up lines of communication. That creates a forum where concerns can be aired, hospital politics understood and potential problems averted.

“Everyone has to be open-minded and willing to develop some common pathways,” says Dr. Simone. “You also have to look at it from the perspective of the specialists. Why aren’t they being responsive? Why are they resistant? That can be insightful.”

If there are no acceptable alternatives nearby, he says, hospitalists can now use technology to their advantage. For instance, they can arrange telemedicine consults with specialists in academic medical centers further away.

It is also useful to keep in mind that specialists are hospitalists’ customers too. “I have nothing to gain by becoming adversaries,” says James Castillo, MD, the medical director of a hospitalist group in Harlingen, Texas. “We are part of the hospital, and we want the specialists to be happy too. We can change if we have to change and if it will improve patient care.” 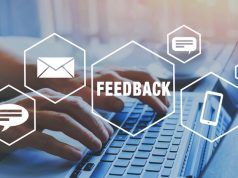