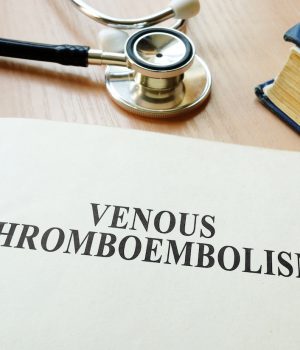 THE CONSENSUS IN MOST HOSPITALS is that prophylaxis for venous thromboembolism (VTE) is widely used. More than a half million Americans suffer from the potentially deadly condition every year, after all, and big-name regulatory bodies have made VTE prophylaxis a high priority.

But as Banner Good Samaritan Medical Center in Phoenix found, physicians’ perceptions about VTE prophylaxis may be at odds with reality. When the 668-bed hospital began tackling VTE prophylaxis rates in 2009, the VTE prevention team uncovered real room for improvement.

“Before we started, we had one VTE event every other day, and at any given time, 20% of inpatients had no VTE prophylaxis at all,” explains hospitalist Lori Porter, DO, who led the project. That’s when the hospital set a goal of providing VTE prophylaxis to about 90% of its patients. (Research shows, says Dr. Porter, that only 10% of hospital patients will qualify as observation or low risk.)

For updated information on DOACS in extended VTE prophylaxis, reducing risk in post-discharge patients, and the use of heparin, read our 2020 VTE Prophylaxis Special Report.

Three years later, only 13% of the hospital’s patients on average were receiving no prophylaxis at all, and the percentage of high-risk patients prescribed both pharmacologic and mechanical therapy had jumped from 18% to 25%. “Over three years of tracking live positive radiology studies,” Dr. Porter says, “we went from nine events per 1,000 discharges to just under four “an estimated relative risk reduction of 59%.”

Overall, VTE prophylaxis rates at Banner have reached an average of 87%, and preventable hospital-acquired events have dropped from 43% to approximately 15%. But Dr. Porter admits that success was anything but easy.

Barriers to broader prophylaxis
According to Dr. Porter, the basic components of Banner’s VTE initiative were relatively straightforward. The hospital set the goal of assessing every patient for VTE risk and considering prophylaxis, using a VTE risk assessment tool and order set. Banner also created a VTE prophylaxis dashboard that tracks what providers are using daily for VTE prevention.

But one big barrier to implementation was the staff perception that prophylaxis was already prescribed routinely and appropriately. “Back in 2009, the medicine committee speculated that approximately 80% of patients were utilizing pharmacologic prophylaxis,” says Dr. Porter. “But we found that only about 55% to 60% were on some form of pharmacologic prophylaxis at any one time. There seemed to be over-confidence that everyone understands clots and their prevention.”

Complicating matters was the fact that numerous VTE protocols were already being used. “We had five hospitalist groups here when we started the project,” Dr. Porter says, “and each had its own paper order set. We even had individual physicians carrying around their own order sets.”

Another barrier “commonly cited in the literature “was the inconsistent use of mechanical prophylaxis. National research shows that in patients for whom compression-device therapy is ordered, only 40% on average receive it. (Banner’s internal research found compliance rates as low as 30%.) After hospital-wide education of nurses and patients and improved documentation, therapy delivery has increased to between 55% and 75%.

Dr. Porter thought initially that about half the patients for whom mechanical therapy was ordered could be transitioned to pharmacologic prophylaxis. But “we have such a high-risk population in terms of bleeding complications,” she says, “that after doing a live chart audit of 100 patients, we found that only 10% could be converted.”

Risk stratification “keep it simple
Because many VTE risk-assessment tools take time to use, Banner adopted a slightly modified version of the three-bucket system developed by hospitalist Greg Maynard, MD, of the University of California, San Diego. Dr. Maynard, who is Dr. Porter’s mentor on the initiative, is vice president of the Society for Hospital Medicine’s center for hospital innovation and improvement.

While some protocols differentiate between “high” and “very high” risk, Banner does not use a “very high” category. “You have to keep it simple,” Dr. Porter explains. “Your goal is to capture 90% of medical/surgical patients to have the greatest impact.”

Banner also modified the moderate category because its population skews toward higher risk. “We basically said that any patient over age 40 and acutely ill should be on pharmacologic prophylaxis,” Dr. Porter said. “And if they can’t be on it for any reason, they likely should be on mechanical prophylaxis.”

While the American College of Chest Physicians revised its VTE prevention guidelines, those use point systems that Dr. Porter’s team feared would be too cumbersome. “Risk assessment has to be as straightforward as possible, but flexible.” Most importantly, bleeding risk must always be considered for each individual patient.

Order sets and a dashboard
When Banner unveiled its new order sets, hospitalists were the first to use them, fueling adoption. But getting buy-in from surgical groups was more challenging. “We spent much of the first year getting multiple committee approvals on the order sets and protocols,” Dr. Porter says. But once team members showed a decline in event rates over time, “provider buy-in was easy.”

Ensuring VTE prophylaxis during care transitions has also been challenging, and it’s taken successive efforts to ensure patients are appropriately reassessed. The initial plan was to create a “no prophylaxis” electronic alert to identify patients not on therapy. But that idea was nixed when the VTE project coincided with Banner’s CPOE launch. “We had to be sensitive to physician alert overload,” she says.

Instead, Banner instituted Project Red, which gave nursing managers a daily list of no-prophylaxis patients. Frontline nurses then discussed those cases with attendings. Project Red has since been replaced by the Lighthouse VTE dashboard, a Cerner program that tracks VTE prophylaxis activities. Nurses must ensure that the dashboard is turned on and that patients are assessed daily for clot prevention.

Feedback
Once a month, the VTE project team reviews the charts of 10 to 15 patients in whom VTEs were found to determine whether the event was preventable. Preventable events are then reviewed in patient safety conferences and committee meetings to continue to educate staff on ways to improve prevention.

“When you track outcomes, it has enormous power,” Dr. Porter says. “Finding even one potentially preventable event translates interest into action.” One project goal is to also have the team call physicians whose patients were deemed to have a preventable VTE, within two or three days of the event. “This has the greatest potential to change future practice, ” she adds.

The success story itself generates continued physician commitment, and it has prompted Banner’s administration to expand the VTE mandatory order initiative to all of its hospitals in six states.

“Once people started seeing the outcomes data,” says Dr. Porter, “they’ve understood how important this is.”