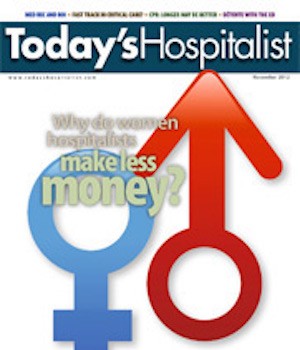 Published in the November 2012 issue of Today’s Hospitalist

HOSPITAL MEDICINE WAS SUPPOSED TO BE DIFFERENT. Young. Diverse. Change-oriented. Why then do female hospitalists overall earn a mean of $35,000 less than male hospitalists, the same gender gap seen in other primary care specialties?

For five years in a row, the Today’s Hospitalist Compensation & Career Survey has found a large disparity between what male and female hospitalists report earning. While the conventional wisdom explains that difference by pointing to women’s disproportionately greater presence in pediatric medicine, academic medicine and part-time work, the data from our latest survey show that those factors tell only part of the story.

Why do male hospitalists earn more? While some women physicians chalk up the gender gap to bias, others say the difference is due to fewer women “at least in their first years of practice “chasing leadership roles that bring in more money or the bigger dollars that come with greater productivity.

The party line is that women physicians earn less because more of them work part time. While our survey found that more women hospitalists do work part time than men “22.5% compared to 8.4% ” the pay gap persists even when part-timers are excluded from the data. Among only full-time hospitalists, women earn $207,041 compared to $237,365 for their male colleagues.

Analysts also like to point out that more women work in academia, which can further bring down their compensation. But a look at our survey data finds that almost the same number of male and female hospitalists work for a university or medical school (9.8% of men vs. 9% of women).

Other factors
When you drill down into the data, however, some factors that could affect compensation for female hospitalists do emerge.

And in all settings, male hospitalists tend to work slightly more shifts per month (16.68) than their female counterparts (15.96). That’s a 5% difference in work hours.

Another data point for full-time hospitalists who treat only adults: While 16% of male hospitalists reported earning $300,000 or more a year, only 6.6% of women put themselves in that same group of top earners. Could the fact that more men report earning considerably more ” presumably because of higher productivity or because they’re in leadership slots that pay more “be skewing the compensation figures for both genders?

Different expectations?
When talking about the compensation gap, some hospitalists see little more than old-fashioned cultural gender differences and perhaps even bias.

“There is definitely a gender bias, a subtle kind,” says Patience Reich, MD, associate professor of internal medicine at Wake Forest School of Medicine in Winston-Salem, N.C. That bias plays out, Dr. Reich explains, in how employers across many professions take different views of the men and women working for them.

Employers tend to pay men for their long-term potential while paying women on the basis of what they already bring to the table. The underlying (and often wrong) assumption, says Dr. Reich, is that men will work more years full time, while women may for some stretch of their career opt to work only part time or leave the field altogether.

Dr. Reich thought she was a savvy negotiator when she went to work for a small hospital just out of residency. But then she and a female colleague discovered they were being paid less than a male colleague.
“By quality and productivity metrics, we outperformed him,” she says. When the female physicians weren’t given an explanation for the discrepancy, they both quit.

Inequities
Julia Wright, MD, the business unit president of the North Central region for Cogent HMG, who’s based in Madison, Wis., notes that there are still some inequities.

“Women remain underpaid in medicine relative to men,” Dr. Wright says. “We hoped that maybe this new field of hospital medicine and this new generation would see things differently.”

In a former primary care job, Dr. Wright adds, a male physician had less experience than she did and was hired after her. He not only received a much bigger sign-on bonus, but also tens of thousands of dollars more in compensation. She still isn’t sure, she says, if it was due to gender bias or changing market conditions.

“I use the same philosophy when I look at women with compensation and advancement for leadership,” says Dr. Wright, who’s committed to mentoring women for leadership slots. “I’m more aware and take some extra steps to be sure everything is fair.”

All about flexibility
Other hospitalists acknowledge that there’s a pay gap, but they say it stems from what makes hospital medicine so appealing: flexibility and opportunities for better work-life balance.

“It’s not that female hospitalists are not being treated fairly,” says Kimberly Bell, MD, regional medical director of EmCare Inpatient Services for the Pacific West division in Auburn, Wash. Instead, Dr. Bell adds, more women than men choose to not chase the (much) bigger dollars.

“After a certain point, money is not as big a motivator for some women vs. some men,” she notes. “There’s fulfillment outside of finance, to develop a hobby or to volunteer for school.”

Dr. Bell points to her own on-the-job choices that have an impact on her bottom line. Her male colleagues routinely take 12 to 15 clinical shifts per month, while she limits hers to 10 to 12 to have more time at home. “At the end of the year,” she acknowledges, “I know compensation will be different.”

She also notes that she was once offered a job with an “astronomical” compensation package. The downside was that she would have had to see 25 patients per day, the majority of them in the ICU. She turned the offer down.

“Anybody who wants to sign up for that, I’m happy for them,” Dr. Bell says. “But that’s not me. It’s more important that I have a Wednesday off to go to a PTA meeting.”

Smitha Chadaga, MD, associate chief of hospital medicine at Denver Health Medical Center in Denver, came back from her second maternity leave. She knows that taking those 12 weeks off has had an impact on her income.

But she’s clear that, other than reduced income related to family leave, she and the other women hospitalists in her group are on a level playing field with their male colleagues in terms of compensation.

“It’s very clearly stated,” Dr. Chadaga says. “If you’re X number of years out of residency, you get X amount of money, and that doesn’t have anything to do with gender.”

Different expectations?
As for career opportunities, Dr. Chadaga points out that her fellow co-associate chair of hospital medicine is a woman, as is the chair of the division. Dr. Chadaga and another woman hospitalist are co-directors of the observation unit, while women physicians also serve as directors for the chest pain observation service and the consult service.

“Actually,” she notes, “the only service where the director is a man is our procedure service.”

But while women in her current hospital are encouraged to step up to leadership positions (and potentially higher compensation), that’s not the case everywhere. She has heard, for instance, women colleagues complain about department chairs in other institutions who have very different leadership expectations of women physicians.

“Women tend to undervalue their skills and don’t want to rock the boat,” Dr. Smith says. “They want to be conciliatory team players as opposed to being more strategic, figuring out what others make and saying, ‘I’m important. This should be my compensation.'”

But Dr. Smith counts herself among those who don’t believe the deck is stacked against women in terms of promotion or compensation.

“I’m a woman and chief of the division,” she points out, noting that she’s been a hospitalist for 10 years and in her current position for two. “At this point, I don’t think there is bias.”

She says, however, that more women physicians choose career options that allow them more flexibility. Of the 60 physicians in the hospitalist medicine division at Children’s National, many more women than men (11 vs. three) choose to work part time, opting for “quality of life vs. quantity of benefits.”

And even among full-time hospitalists, women often turn down extra shifts, particularly if they’re in a dual-income family. Like Dr. Bell, Dr. Smith sees women physicians making choices that give them more time at home.

“Men,” she notes, “are more aggressive in looking at what they can do at this point in their careers.”

Thomas McIlraith, MD, chair of hospital medicine for the Mercy Medical Group in Sacramento, Calif., realized that several years ago when he had to name site leaders for the hospitalist groups in all four hospitals that the medical group serves. In two of those cases, he felt the most qualified candidates were male hospitalists, and both of those men accepted the offer. In the other two sites, however, he believed the most qualified candidates were female hospitalists “and they both turned him down.

For one of those women candidates, Dr. McIlraith says he doesn’t know why she wasn’t interested in taking on the promotion. But the other woman made it clear that she didn’t want the additional responsibility or additional burden of time.

“Her husband was very involved in his business career,” Dr. McIlraith recalls, “and it was just too much of a commitment.”

More leadership later
The solution that Dr. McIlraith says he opted for was to find out what those women’s interests were and try to encourage them to take on leadership positions, even if those entailed less commitment in terms of time.

But that points to another factor: Many women physicians, particularly those with young children, aren’t interested in the leadership roles (and income) that may appeal to them later in their careers.

That was the experience of hospitalist Jennifer Osborn, MD, who works with Dr. McIlraith as chair of internal medicine at Mercy San Juan Medical Center in Carmichael. She notes that hers is one of three big departments at Mercy San Juan “the others are OB/GYN and surgery “that are chaired by women doctors. But

“I consider myself a reluctant leader,” Dr. Osborn admits. She does think that many women physicians lack mentors and have a harder time seeing women exercising leadership. But 10 years ago, with four children, “the last thing I would have wanted was to take on additional responsibility,” she points out. “I never really considered a leadership position.”

That was partly due to the fact that she wasn’t the sole breadwinner in her family. “I think men have that burden often,” Dr. Osborn notes, “so perhaps the pay differential does drive them to more prominent roles.”

Earlier in their careers, when many women are juggling being a good doctor with home responsibilities, women doctors may see leadership “as someone else’s job and they do not really see the benefits of it,” Dr. Osborn adds.

“It took me a while to know that it is important to me and that it is worth doing. I think a lot of women, particularly early on, do not have a sense of that.”