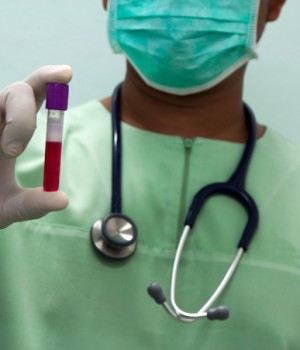 ALL INPATIENTS should routinely have a daily CBC and basic chemistry screen, right? Not so, according to the Society of Hospital Medicine, which has identified these often-unnecessary orders as part of the Choosing Wisely campaign. But despite that recommendation, many residents continue ordering such tests—even when they know those orders aren’t needed.

This puzzling fact concerned the House Staff and Advanced Practice Provider Quality Council of Philadelphia’s Hospital of the University of Pennsylvania (HUP). Jennifer Myers, MD, a hospitalist who is the faculty advisor for that council, is also director of quality and safety education in the department of medicine at the Perelman School of Medicine.

“Each year, our council leads quality improvement efforts,” Dr. Myers says. While reducing the number of unnecessary labs is a long-term goal of the initiative, the council started by working to understand why residents keep on filling out those orders.

Residents’ self-reported patterns
To find out, the council distributed a 15-question survey to 116 internal medicine and general surgery residents at HUP. The QI research team was headed by Mina S. Sedrak, MD, MS, who at the time was a fellow at Penn’s Center for Healthcare Improvement and Patient Safety.

“We have seen a 10% reduction in CBC and metabolic panels.”

~ Jennifer Myers, MD
Hospital of the University of Pennsylvania

The survey asked about possible contributors to unnecessary ordering. Those included habit, lack of awareness of how much tests cost, fear that attendings might be critical if test results were missing, general hospital culture and ease of repeat ordering. (See “Culprits include habit, convenience.“)  ”We defined ‘unnecessary test’ as one that would not change management, regardless of its results,” says Dr. Sedrak, who is currently an assistant professor of medical oncology and therapeutic research for City of Hope in Duarte, Calif.”We wanted to find out the frequency of perceived unnecessary ordering of inpatient lab tests, what factors contributed to that and potential interventions for change,” Dr. Sedrak says. Results were published in the December 2016 Journal of Hospital Medicine.

As for why, the top factor implicated in unnecessary ordering (cited by 90.5% of respondents) was practice habit: “I am trained to order repeating daily labs.” But the perceived role of the attending was also important, cited by 76% of respondents who were concerned that they might be asked for the data and not have it. Moreover, residents “acknowledged that attendings did not model cost-conscious care,” Dr. Sedrak says.

“The findings show,” he points out, “how important medical culture and clinical learning environment are in shaping resident behaviors.”

Education about the appropriateness of certain labs in specific patient populations is an important way to change that behavior, he says. “A patient coming in for a respiratory infection does not need a daily CBC.” Instead, Dr. Sedrak explains, residents “should be educated to have a realistic assessment of whether a given patient actually needs a particular test.”

Such education should also alleviate residents’ concern about their attendings asking for results, he adds. On the contrary, “teaching points can emphasize the importance of restraint and the dangers of overutilizing services.” In fact, he notes that residents filling out the survey wanted attendings to be “more critical about over-ordering” and to put more emphasis on which labs residents did or did not need to order.

Technology, cost transparency
In addition, “habit is heightened by the ease of pushing the ‘copy forward’ button in the patient’s EMR to continue repeating the tests ordered on the day of admission,” Dr. Sedrak points out. “Using ‘copy forward’ is not just a habit, but a sort of ritual passed down from senior to junior residents.”

To address that concern, says Dr. Myers, Dr. Sedrak and the team began an educational campaign at HUP that reached out directly to housestaff and advanced practice providers. They also worked with Penn’s marketing department to design “reminder” screensavers and posters that prompt residents to stop and think before ordering a lab test.

“These remind people that unnecessary blood drawn every morning can have an impact beyond costs on patient and clinical outcomes,” she notes. “The patient is woken up and disturbed and experiences a painful injection. And excess blood tests can lead to iatrogenic anemia.” The hospital  continues to use posters to bring home that message.

Lack of awareness of how much labs cost also emerged as a key driver of unnecessary orders.

“Residents simply do not know the costs of these tests or of other components of the health care system,” says Dr. Sedrak. “When we asked for potential solutions to this problem, the No. 1 suggestion was an increase in price transparency.” However, “I am not sure that just knowing the prices alone will be enough to change behavior.” That’s because, he adds, the behavior is rooted in culture and practice instilled early on residents’ training.

Sustained results
Nevertheless, HUP has taken steps to improve cost transparency, Dr. Myers points out, and the hospital is now in the middle of a trial of putting Medicare charges for labs into the computers. “We worked with our CMO and IT department to display charges for some of the most commonly ordered tests, as well as some of the most expensive tests,” she says. “We have randomized our study according to the test.”

Together, these interventions have already had some effect, based on the hospital’s internal tracking of how frequently daily labs are ordered. “We have seen a 10% reduction in CBC and metabolic panels,” Dr. Myers reports, an improvement that has been sustained over two years. 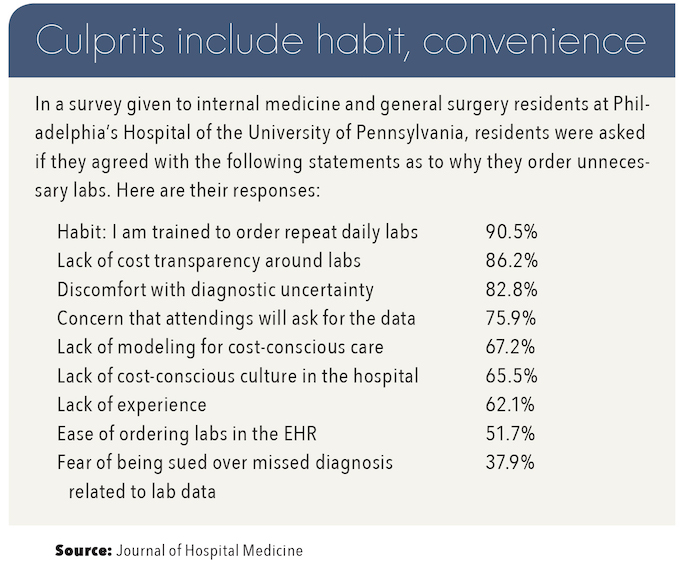 If it meets the necessary criteria, I use the prolonged service code but I think the hospitalist who made the first visit has to adjust their code or time their note or something like that. I haven’t done it in a while because my compensation is hours based and not RVU based.